During an interview with the Samoa Observer, Luamanuvao, who is in Samoa this week, said there is a need for Samoans living in Samoa and abroad to write and tell their stories to the world.

The Samoa Observer's Publisher, Muliaga Jean Malifa, presented Luamanuvao with two sets of copies of Our Heritage the Ocean, Only the Word Survives, The Pacific is Rising and the latest book to be launched in November, Against the Flow.

The gesture was to acknowledge Luamanuvao being a consistent supporter of the Samoa Observer group's storytelling competitions over the years. The second set of books are for Victoria University's Samoan Studies Department, which is celebrating its 30 years anniversary this year.

Luamanuvao thanked the Samoa Observer for encouraging storytelling and writing, both in English and Samoan. 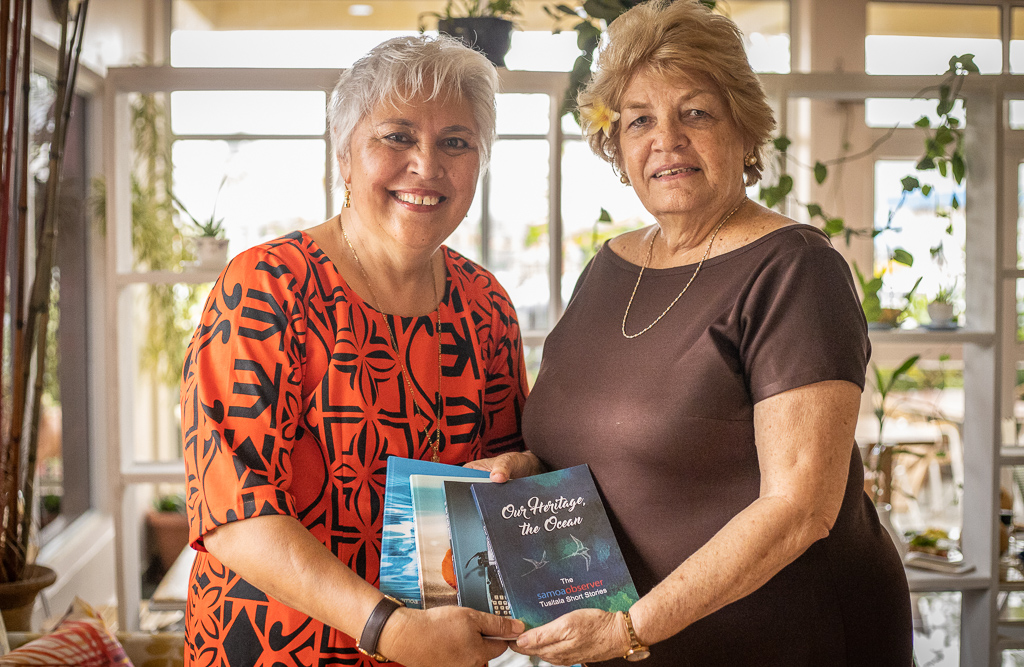 "Many of those early writers came from Samoan storytelling and it is very important that we honour the importance of language and the stories that are conveyed in Samoan and English.

"For us to appreciate the stories of our ancestors and stories of our spirits and God, we have much to thank and that’s that group who had the vision to write very courageously about us and who we are and where we come from.

"And they’ve always acknowledged that spirit as in the pe’a (bat), in the lulu (owl), fanua (land) and in our gafa and fa'alupega (genealogy)  and in our own stories that are contained within our families, who we are, where we come from in our villages and our places of belonging."

She honoured their trailblazing efforts in terms of writing courageously in order to tell Samoan stories for the past, present and future generations, as well as the efforts of upcoming writers aiming for the same thing.

Looking at the future, Luamanuvao believes the number of Samoan writers can only grow.

"And being a new Zealand born Samoan, I find the Samoan language the most beautiful language because it’s very metaphorical and we have a gift of language," she said.

"Whether it be the orators or our families but also with writing and to be confident and conversant and the ability to stand tall and walk tall as a Samoan that I can communicate in Samoan and English just as good or better than anybody else.

"[It has] enabled us to have the courage to seek out who we are, to learn about whom we are and to write and be confident in who we are orally and it does continue and it’s growing."

Luamanuvao is married to Peter Swain, the author of Pālemia: A Memoir, published in 2017.

"That memoir was a very important way of also talking about our own peoples' contributions as leaders and hearing that voice coming through is important.

"We need to write more. We need to tell more stories. From Samoa but also in Samoan communities living in New Zealand and Australia and American

"Through these stories we grow stronger and we dream and we continue to tell it how it is."