“It hurts me to see the silence, the silence of those in authority, in churches,” Dr. Mercy Ah Siu-Maliko said, with tears in her eyes. (Photo: Vaitogi Asuisui Matafeo)

Dr. Mercy Ah Siu-Maliko believes that by "rolling out the fine mat of scripture" church leaders and parishioners can work through the challenge of violence, an issue that she says has been too often ignored or avoided by the church until today.

In new research, entitled Church Responses to Gender Based Violence Against Women in Samoa, Dr. Ah-Siu-Maliko and colleagues unpack the history and context of Samoa, and present four textual studies from the Old and New Testament as a resource.

She begins with the story of Adam and Eve, the story of Abram and Sarai’s slave Hagar, the rape of Tamar by her step-brother Amnon, and finally a story about transformation from the Old Testament to the New Testament.

Each text is broken up to be read collaboratively by a study group, with accompanying questions to guide the students through it.

The research is a project of the New Zealand Institute for Pacific Research, and was completed by Drs. Mercy Ah Siu-Maliko, Melanie Beres, Caroline Blyth, Ramona Boodoosingh, Tess Patterson and David Tombs.

Dr. Ah Siu-Maliko said the studies are designed to empower students to speak up about their own experiences of violence, and to heal from them, as well as to prevent it from happening again.

“It is the same method of trying to empower people to speak up and to entrust them that they have the potential,” she said.

Though based at Piula Theological College, Dr. Ah Siu-Maliko is a researcher of the University of Otago. She said she feels called to use theology and the word of scripture to affect public life, and right now that means ending violence against women. 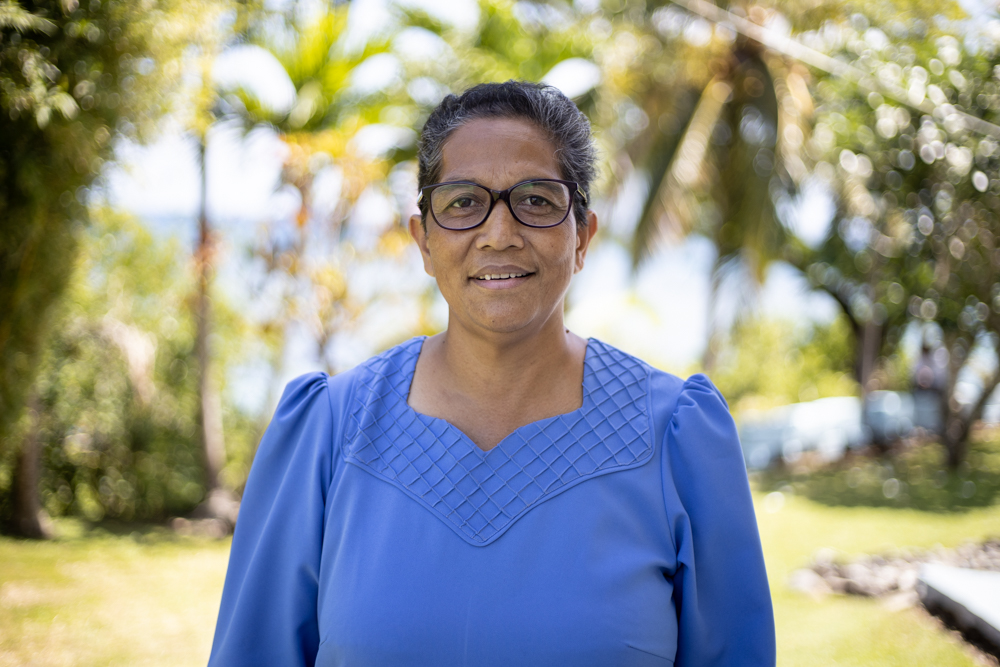 “It hurts me to see the silence, the silence of those in authority, in churches,” Dr. Ah Siu-Maliko said, with tears in her eyes.

“It hurts me to discover that this silence is covering up the hurt, the injury, the pain, that the most vulnerable are facing within their homes.”

One story among the four is of the rape of Tamar by her half-brother Amnon, from the book of Prophets in the Old Testament. Tamar is raped despite her pleas, and her father, nor brother help her and her rapist is not punished.

Dr. Ah Siu Maliko said the story of Tamar is particularly affecting because of the rate of incestuous rape in Samoa today.

Last year, a landmark Samoan family violence study revealed 9.5 per cent of women reported being raped by family member in their lifetime, and an early study found one in five women had been raped by their partner.

The story of Tamar, whose suffering is compounded by the complicity of her family in her rape, should remind people that violence against women is everyone’s responsibility to prevent, Dr. Ah Siu-Maliko said.

Principal investigator Professor David Tombs, who has been researching Christian responses to gender-based violence, sexual abuse and torture said he found the story of Tamar especially important for Samoa.

“In any context, discussing the rape of Tamar and the fact that it’s her brother who rapes her is significant but in Samoa it seemed to me there was a particular significance given the fact that it’s the brother because of this very strong fa’aSamoa relationship between brother and sister,” he said.

“From a research perspective that was a very interesting element of using a story which has been used elsewhere and seeing how that might be read in Samoa.”

Previously, Dr. Tombs spent 13 years in Ireland working on religion and violence. He moved to New Zealand five years ago to find a completely new context, and working with Dr. Ah Siu-Maliko and other colleagues meant a deep dive into the Samoan world.

“It reaffirmed what was strongly suspected from other contexts I have worked in,” he said of the research. Compared to Ireland, Latin America and South Africa where Dr. Tombs had worked, the Samoan reality also proved the “significant potential” for the church to lead the fight against gender-based violence.

“But also, very often, the church can be part of the problem, and I think that was borne out in this research as well.

“We identified ways the church can fail to speak out or even send negative messages and those need to be identified because they are not necessarily intentional.”

The research found that unlike in other countries with similar violence rates, the churches of Samoa have not been proactive in trying to help solve the problem.

Despite several reports and leaders calling for church leaders to lead on the matter, they have been slow to act and loath to speak out, Dr. Tombs said:

“In Fiji, the church has shown much bolder leadership on church efforts on the prevention of violence against women, but in Samoa, it seems the church is still quite tentative.

“The models which have been used elsewhere haven’t been actively pursued; it doesn’t seem that the steps that have been taken elsewhere have caught the imagination of the church leaders in Samoa.”

But when the Bible studies Dr. Ah Siu-Maliko prepared were piloted in Samoa and New Zealand, Dr. Tombs said he was encouraged by how well they were received.

He believes it is because they are adjusted to suit Samoa, not “parachuted in” from foreign countries or contexts.

“I was really struck when we did the pilot with the groups how seriously they took the biblical discussions when we were having them,” Dr. Tombs remarked.

“The seriousness with which they wanted to take that discussion might not have been the case if we were looking, say, at a statement of human rights, which is another way into the violence against women discussion.

“The model of community Bible study or contextual Bible study, that can be used for different explorations or investigations and it works particularly well when people holds scripture in high regard.”

The other studies work through equality between men and women, and each tell their own story about preventing violence against women. They also address the stigma and shame survivors are burdened with, sometimes more so by their churches.

“Very often, survivors get a message that they are the problem, and one of the things I think Bible study can do is to counter that message and give to churches a strong basis to send a clear message that it is not the survivor who is to be shamed or blamed,” Dr. Tombs said.

Dr. Ah Siu-Maliko said the shame comes from communities believing abuse is a personal problem, and should be left alone by the wider congregation, and not talked about.

But this leaves perpetrators of violence free from accountability, and makes leaders and families complicit in their crimes, she argues.

“We put added burdens on victims that they should deal with this alone because it will bring shame and stigmatise the sanctity of the family, but that sanctity is already broken, already destroyed.

“And this is where the contribution of public theology comes in.

The Bible studies can be facilitated by anyone but certain care should be taken, both Dr. Tombs and Dr. Ah Siu-Maliko agree. There needs to be expectations set out among the students to treat each other with respect, and facilitators need to be aware the studies may cause deep upset or pain.

Dr. Tombs said where there is limited mental health support or psychiatric care, the pastoral care role of the church ought to be able to step in.

“It would be challenging, but it would raise the question of the next step, how to resource the churches to respond in that way.

“When support services are scarce and overstretched it can raise some good issues,” he suggested.

Dr. Tombs said the textual Bible study can be applied to other scary social problems too. He is currently working with a PhD student from the Solomon Islands about using the method to support communities displaced as a result of climate change.

“The central image for this particular project the fine mat of scripture is a particularly good visual image of inviting people to come together for a really important conversation,” he said.

“That conversation can be about any significant community issue.”

See tomorrow's edition for the first instalment of scripture excerpts.