A generation of Japanese elders who lived through World War II are telling their stories in the hope that these remembrances of war might promote peace.

Ikue ‘Iku’ Mochizuki was just ten years old when she was entrusted with her six-year-old brother, Kiyoshi, to ensure their safe journey from Manchuria to Japan, at the conclusion of the war.

She doesn’t remember what they ate on their month long, 500 kilometre walk to the port.

She does remember her mother asking her to promise never to let go of her brother’s hand and to make it to Japan.

Iku’s daughter is Apia resident, Izumi Mochizuki-Greubel. In 2016, she published her mother's accounts of her journey for the first time and, last year, printed an English translation.

That book, A Promise to Remember, is now available at Samoa Stationery and Books from this week.

Mrs. Mochizuki-Greubel hopes the story, written from Iku’s perspective as a child, can teach young readers about the impacts of war on children.

Speaking to a crowd of readers and students from Avele College, Mrs. Mochizuki-Greubel drew applause but also tears as she shared her mother’s journey.

Audience member Lanuola Tuitama was inspired to sing Filemu pei o se lupe (Gentle like a perched Dove) for Izumi and her mother.

“You are a very brave woman,” she said.

“Sitting here listening to you, Izumi: what a beautiful way of trying to solve peace.”

In 1931, Japan invaded Manchuria, taking it from Chinese hands and began encouraging its people to move there. By the end of the war, 1.5 million Japanese had resettled there.

Iku’s father was a civil engineer and led the building of several bridges crossing the Yalu River, some of which still stand today, Mrs. Mochizuki-Greubel said.

The occupation continued until 1945, when Japan was ousted by the Soviet Union and Mongolia. The Japanese began a slow repatriation process but many succumbed to illness, starvation or torture, like her grandfather.

Nine months after the end of the war, Iku and Kiyoshi were sent, ahead of their parents, on the train to return to Japan and stay with their grandparents there. They boarded the train but well ahead of their destination were told to disembark without explanation.

So, Iku, Kiyoshi and thousands of other refugees walked hundreds of kilometres with no supplies, in the hope of reaching home. Some died along the way, and the children witnessed mother’s burying their babies on the side of the path, and dead bodies attracting flies as the walked.

Mrs Mochizuki-Greubel said putting the book together was like assembling a puzzle. The majority came from her mother’s memories, but given she was only 10, there were gaps that needed to be filled.

She interviewed her mother’s family, and other survivors of the war. Some were reticent; others spoke freely.

She also scoured government records to confirm details like the ship her mother and uncle finally boarded in the port of Huludao in China to make that final journey to Japan. 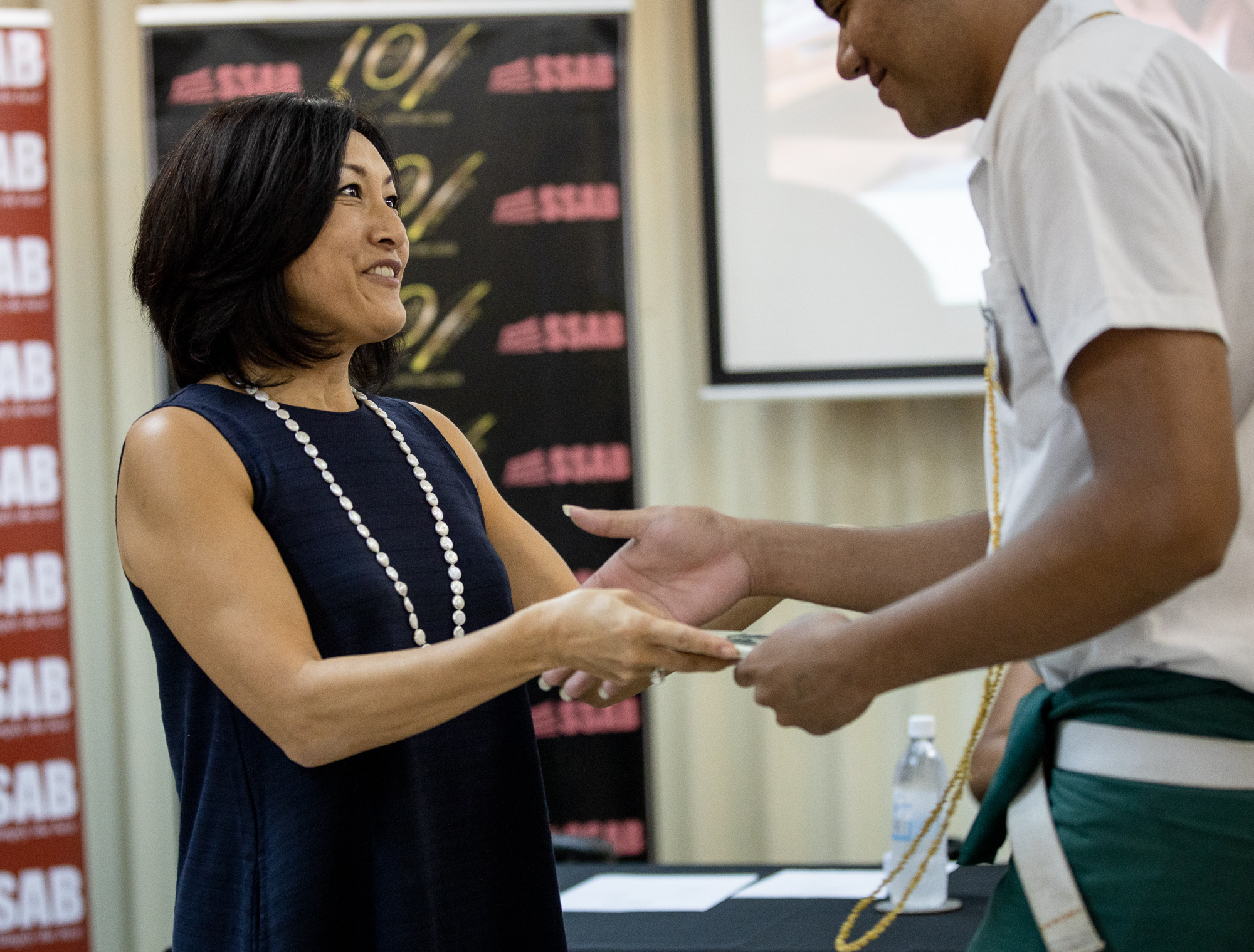 “A lot of people who experienced the war they don’t want to talk about it but I was lucky,” Mrs Mochizuki-Greubel said.

“My mum was eager to talk, not all the time but once in a while she would want to talk about it.”

Freelance journalist Elizabeth Ah-Hi said A Promise to Remember was a “said, poignant tale from a child’s perspective.”

She said young Iku’s relationship to the scraps of clothing her mother made her before the journey to Japan reminded her of her own grief, having lost her mother not long ago.

“You lose your point of reference and you are bumped off the axis that keeps your world spinning,” she said.

“I understand the irrational need to hang onto belongings, on matter how small.”

Ms. Ah-Hi shared the passage from the end of the book when the children finally return to Japan, and take their first bath in years. It reads like a cleansing ritual, she said, washing away the suffering of the past.

That bath allowed young Iku to face her new reality, Ms Ah-Hi said, “one that was unwelcome, but still had to be lived.”

Mrs. Mochizuki-Greubel said she too cries whenever she reads the book.

“I know what is going to happen as I am writing and editing, but I always cried as I was reading. It gets so emotional,” she said.

Mrs. Mochizuki is now 83 years old, and is a passionate peace activist, her daughter said. She speaks publicly about her experience, as do many people her age.

“Until now they were kind of quiet, but they finally thought, before we pass away we have to do this, and mum felt the same way,” Mrs. Mochizuki-Greubel said.

Working on the book, and doing all the illustrations for it gave Mrs. Mochizuki closure on a terrifying chapter of her life.

“With these drawings I think so much stuff came out. My dad felt so bad, she was sobbing and still drawing but she sad at the end it was nice to have closure.”

Mrs. Mochizuki is not a professional artist. The drawings are childlike and remind the reader just how young and vulnerable the  book's protagonist was.

The entire book is a family project, with Mrs. Mochizuki-Greubel’s son, then 20-year-old Douglas Mochizuki-Greubel writing the initial translation in just two weeks while on summer break from college. 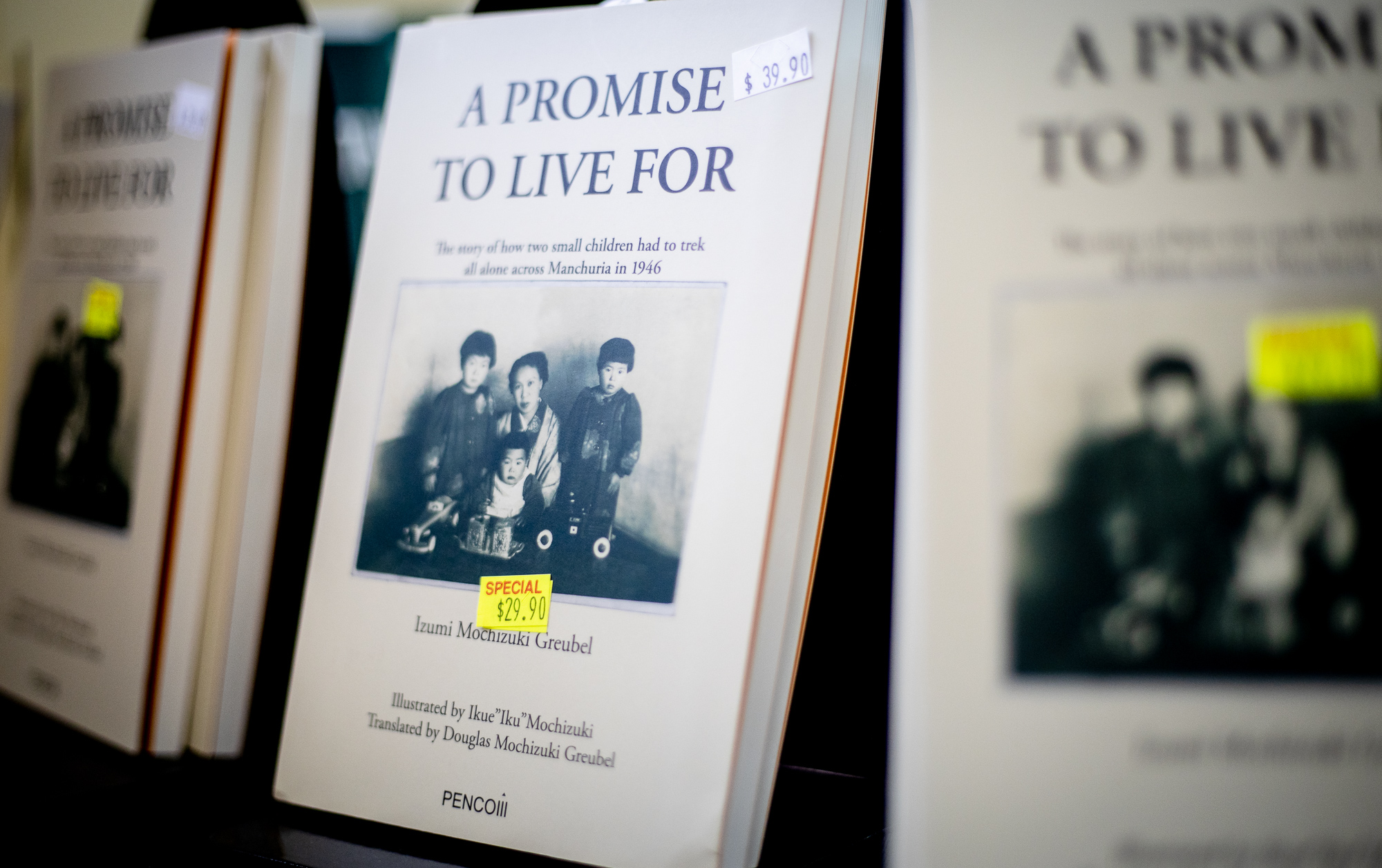 “My mum was Skypeing with him and she said Doug, are you interested in translating this? I am sure you don’t have any homework and you are bored to death these holidays,” Mrs. Mochizuki-Greubel recalls.

“So being asked by his grandma he couldn’t say no!”

A Promise to Remember is available at Samoa Stationary and Books and is on special during Literacy Week for $30.