The Head of State, His Highness Tuimaleali’ifano Va’aletoa Sualauvi II, accepted the Malaysian Commissioner’s credentials at his residence in Vailele. 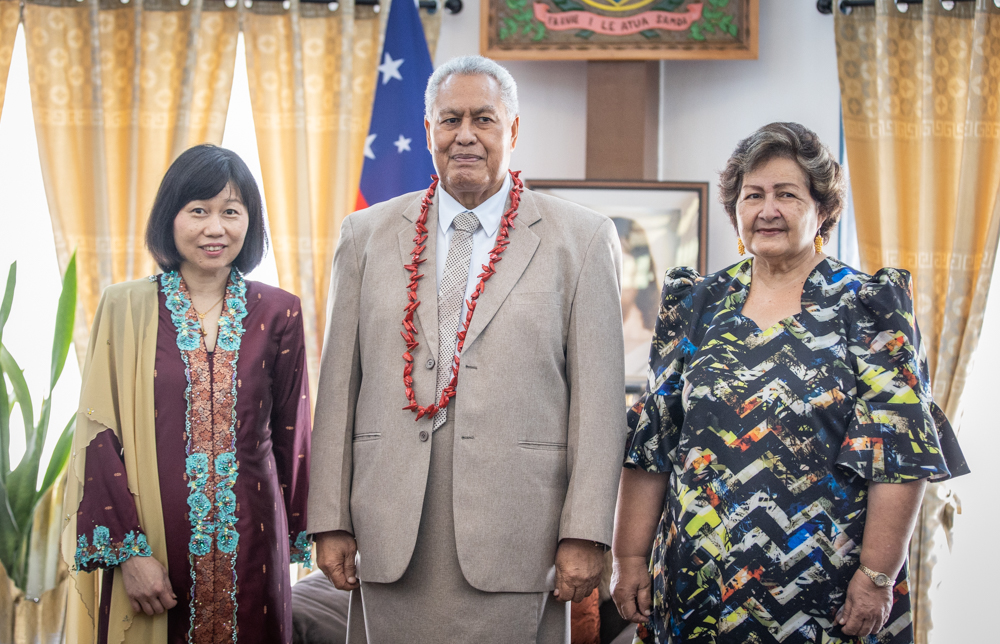 “Our countries have similar interests and aspirations in trade, capacity building and cooperation in the international for which we engage in these areas within the United Nations and Commonwealth,” he said.

“Like Malaysia, we attach great importance to human capacity building and the Government of Samoa appreciates Malaysia’s continuous support through its Malaysian Technical Cooperation Programme (M.T.C.P.) which has trained Samoan officials over the past three decades in areas such as diplomacy, tourism, taxation, health, energy, technology and others.

“[This training] contributes to the professional experience of our public service and sustainable development of Samoa.”

He added that Samoa has supported Malaysia’s candidature in international organisations over the years and has provided a platform to further cordial relations.

“I wish you the best in your tenure and I am confident that, during you tenure, your office will continue to push the warm relations that our two countries enjoy to new heights and in promoting areas for further cooperation between Governments," he said.

The High Commissioner for Malaysia relayed warmest greetings from His Majesty Al-Sultan Abdullah Ri’ayatuddin Al-Mustafa Billah Shah, the King of Malaysia, and extend the best wishes to the Government and friendly people of the Samoa.

“Since the establishment of diplomatic ties between Malaysia and Samoa in 1982, the two countries have always enjoyed cordial and friendly relations," she said.

"Despite limited exchanges of visits between the two sides, there have been increasing interests and engagements in the areas of trade, human capacity building as well as cooperation in international bodies such as the United Nations and Commonwealth.

“Malaysia attaches great importance to developing its relations with Samoa. Against the backdrop of growing uncertainties in the global order, Malaysia will continue to support Samoa’s capacity through the M.T.C.P."

The High Commissioner noted that since 1982 more than 100 Samoan officials have benefited from the technical programme, with seven officials this year alone selected to attend training on issues such as crisis management and epidemiology.

She also acknowledged Samoa’s support for Malaysia’s candidature to international organisations in the past.

“We hope to increase the participation of Samoa candidates in future M.T.C.P. courses that will contribute to the sustainable development of Samoa," she said.

“In fact, due to our geographical distance, the international fora have provided us with the platform to have constant interaction with one another. Malaysia hopes to continue obtaining Samoa’s support for its candidatures to international organisations in the future.”

The High Commissioner also said she was committed to further improve and the very friendly relationship between Samoa and Malaysia, and expand bilateral collaboration in new areas of mutual interest.

She acknowledged the warm hospitality and kindness that the Government of Samoa has extended to her and her delegation.

Mrs. Wong Mee Choo has been the High Commisisoner of Malaysia to New Zealand since February 2018 and is residing in Wellington. From 2014 to 2018, she was the Undersecretary of the Inspectorate Division at the Ministry of Foreign Affairs of Malaysia. She also held other positions within Foreign Ministry of Malaysia. She holds a Post Graduate degree in International Relations Studies from Tsingshua University, Beijing, People’s Republic of China.