A new $3 million tala office for the Office of the Electoral Commissioner (O.E.C.) is slated for construction soon.

It is unclear, at this stage, where the new building will be located.

The Electoral Commissioner, Faimalomatumua Mathew Lemisio, in response to an email from the Samoa Observer said they are finalising a location for the new building.

Asked when works will start, he said soon.

At the moment Office of the Electoral Commissioner is renting two makeshift office spaces for its operation at the Development Bank of Samoa (D.B.S.) and the National Provident Fund (N.P.F.) Plaza.

The deteriorating state of the old Electoral Office at Mulinu’u forced the more than 40 staff members to vacate to Tofilau Eti Alesana building some years ago.

It is unclear what will happen to the old abandoned Electoral Office building at Mulinu’u.

The building which was built in the colonial times was declared unsafe because of its poor condition.

Earlier this year O.E.C. had to move again to its two separate offices to free up the Tofilau Eti Alesana building to accommodate offices for the Attorney-General and Legislative Assembly.

The $3 million earmarked for the project comes from $5.965 million allocated for O.E.C. operational cost and activities for the current financial year.

The rationale behind the initiative is to encourage stronger participation for stronger democracy from youths. 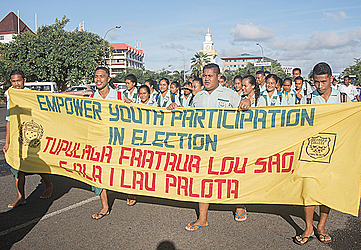 Faimalo said since the concept was launched the office has noticed a number of schools requesting to be part of the event.

It has shown to be an effective way to reach younger people.

The National Voters' Day is celebrated on the first Friday of March every year which is the month that Samoa’s general election takes place.

“The logic is to instil in our young people mainly that on every first Friday of March every year apart from election year, there will be a special day commemorating voters and their rights on elections,” said the Commissioner.

“Then on election year, on the same first Friday, they will then actually get to exercise those rights, in a real election.”

According to Faimalo the most important goal of National Voters' Day is for young people to be given a platform to offer their perspective of elections.

He pointed to the event held in Savai’i which has helped O.E.C. to determine ways to reach out to young people on why they should participate in elections.

“This is an ongoing concept and changes to mindset of people when it comes to elections don’t come overnight,” he said.

“But this is one mechanism that we know will drive those changes in future.”