A last-second penalty has cost the Manu Samoa a match against U.S.A. Eagles – for the second time in a row.

The Manu went down 10-13 in Saturday's second round of the Pacific Nations Cup at ANZ Stadium in Suva.

But the Manu could well be feeling aggrieved after a wrongly disallowed Johnny Vaili try denied them a half-time lead.

Conditions were an improvement on last week's match at Apia Park but both sides made errors with the ball that meant neither could maintain any attacking momentum.

Vaili put the opening kickoff out on the full (having done so twice against Tonga last week), and the U.S.A. spun it wide from the first scrum for winger Martin Iosefo to make big gains.

Samoa were caught offside inside the 22 metre line, allowing Eagles first five AJ MacGinty to open the scoring with a 3rd minute penalty.

But the Manu scored the game's only other try in the 6th minute after their first foray inside the attacking 22.

They went eight phases of fairly static ball, but remained patient before a gorgeous inside ball from AJ Alatimu to Alapati Leiua unlocked the defence for the winger to go up the middle and score. 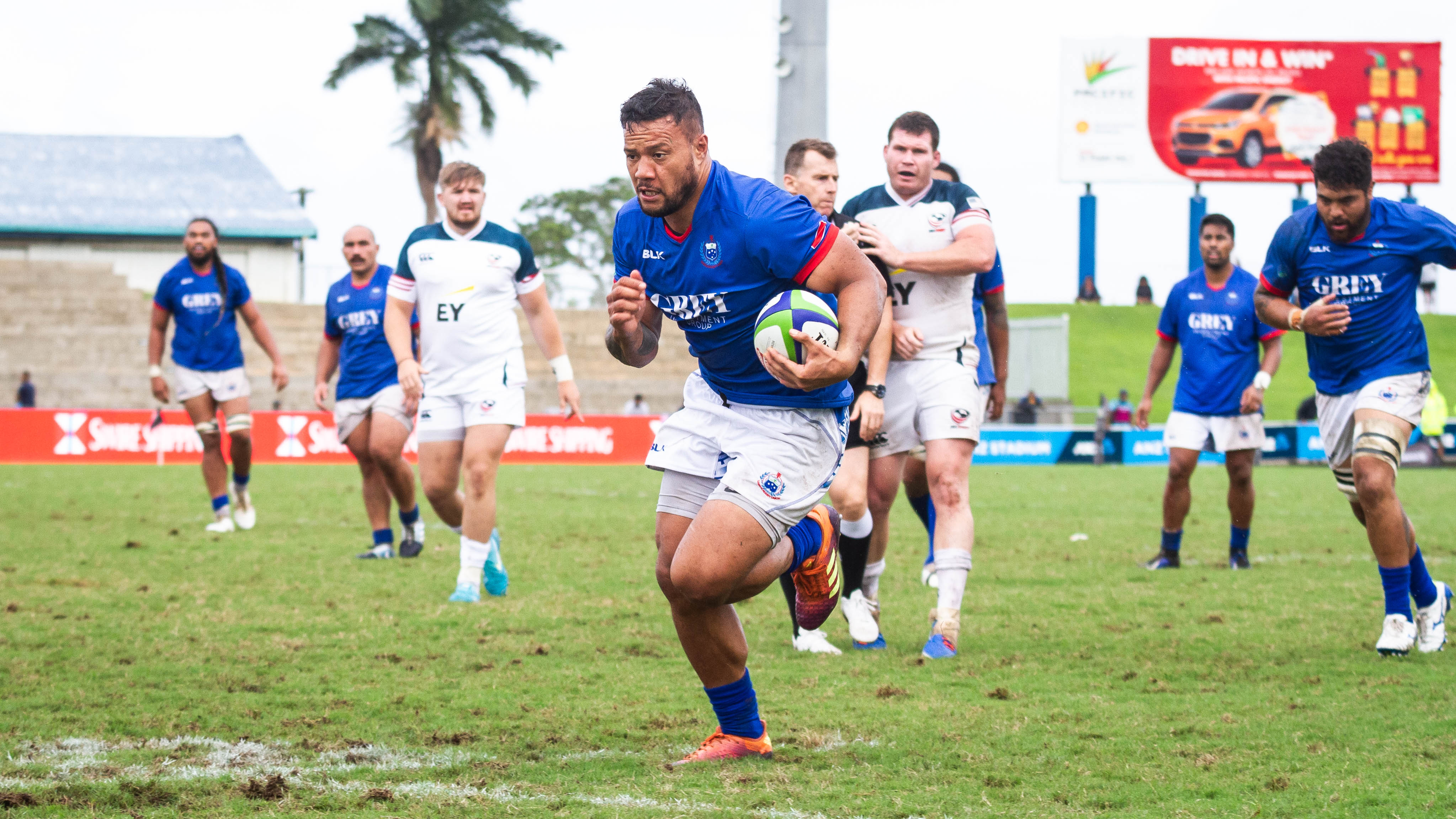 First five Alatimu added the extras to give Samoa their only lead of the game, 7-3.

That would last about 12 minutes, as the U.S.A. began to set up camp in Samoa's half.

A grubber from the tidy MacGinty almost set Martin Iosefo through to score, but it was the first five himself who eventually crossed the line after a few penalties in a row.

The Eagles got the ball central after a five metre lineout, and the Sale Sharks pivot went over in the 19th minute after a nice run against the grain, before kicking the conversion as well.

Both sides made errors in the second quarter of the match, but the Manu's ill discipline kept U.S.A. in attacking position.

With 70 per cent territory and 64 per cent possession to the Eagles at the break, Samoa had only their very good goal line defence to thank for the fact they were in touch come half-time. 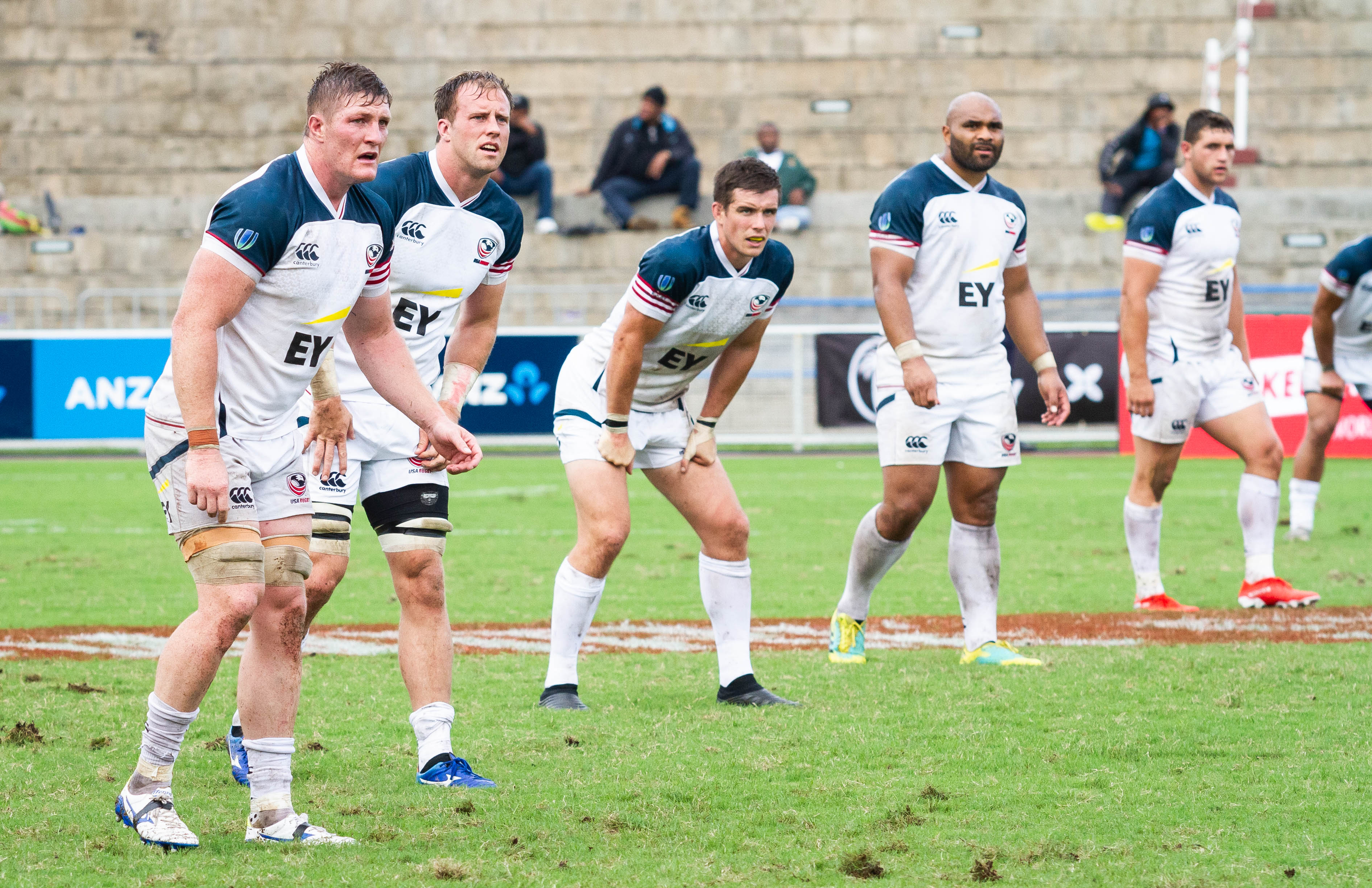 But they should have had the lead, and would have, were it not for a mistake from referee Nigel Owens, widely regarded as perhaps the world's best.

The U.S.A. shifted the ball wide with 40 minutes on the clock and Vaili did brilliantly to block the final pass with his boot.

The Manu 7s flier then scooped up the ball and ran away for what would have been his first test try, but the whistle had gone by the time he dotted down.

Owens blew up play after hearing something from his assistant referee, but, unfortunately for the Manu, he misinterpreted the Assistant Referee's "off the boot" call as the ruling of a knock-on against Samoa.

It was a cruel twist of fate, but the Manu would have been fortunate to be leading at half-time had the try stood, given the run of play.

They did start the second period brighter, and once again Afaesetiti Amosa was impressive at number eight after he came on for skipper Piula Fa'asalele.

Alatimu was replaced by centre Rey Lee-Lo, allowing Henry Taefu to play first five for the rest of the match.

But Samoa couldn't execute as coach Vaeluagaomatagi Steve Jackson would have wanted, and lost the ball at an attacking lineout after turning down a kickable shot at goal.

Regular errors meant the Manu couldn't turn possession into points or even much pressure inside the 22 metre line as the hour mark rolled around.

Eventually the U.S.A. were penalised for being off their feet at a breakdown inside the 10 metre line, before being marched 10 more for some backchat from flanker Tony Lamborn.

That gave Taefu a pretty easy shot and he made no mistake, tying the game up in the 73rd minute.

But the Eagles pinned Samoa back in the dying stages, and won a penalty for offside at a lineout maul.

With time up on the clock, MacGinty lined up out wide to win the match for his country.

He just snuck the ball inside the right post, and for the second time in nine months, U.S.A defeated Samoa by kicking a penalty with the last play of the game.

The Manu will now be seeking to bounce back in their final Pacific Nations Cup game at the same venue next week against host Fiji.