For Jeremy Mauala-Dodson, representing Samoa is everything

Representing his country is bigger than life for Samoan sprinter, Jeremy Raponi Mauala-Dodson.

He represented the United States of America several times, however the enthusiasm of waking up in the morning to run for Samoa is rewarding, the athlete says.

“I represented the U.S.A. a couple of times; I was given a lot of gear and a little bit of money but it never amounted to how much they wanted out of you," said Mauala-Dodson.

“They want gold medals nonstop but didn’t want to pay for the gold medals; and they want to use you; and you’re just a tool for them. But for Samoa, all they want is giving your all on the field.”

In an interview with the Samoa Observer, Mauala-Dodson was quick to apologise to Samoa for placing second in the Pacific Games.

“This wasn’t what I can give; it wasn’t my best and I was a little restricted because of injury," he said. “I didn’t want to make that the main problem and I didn’t give all my best, I gave all I could at the time but it was not my best and but I know there is better in me and I’m upset about it.”

In a dramatic duel to the finish at the Men's 200 metre final at this month's Games, Maula-Dodson ran a time of 20.91 seconds which was not enough to stop him being edged out by the Games' defending champion, Fiji's Banuve Tabakaucoro who posted a time of 20.87.

The son of Peggy Mauala and Cyrus Dodson, the sprinter is from Denver, Colorado and Malie; a mixed lineage he now represents with a hyphenated surname.

After withdrawing from representing the U.S.A. his mind was still set on track and field, before he first decided to run for Samoa:

“I looked at Australia where most of my mom’s family lives. And I applied to the international federations but, surprisingly, Samoa reached out to me first and when I inquired more about Samoa, I learned this is where my roots are.  And from then on, it was all about representing Samoa.”

He said he had faced criticism that he was looking for a backdoor entry to the Olympics:

“But in reality there is no easy way to the Olympics: you have to hit the standard or you don’t qualify. And I question myself earlier as to whether I was doing the right, but when I represented Samoa for the first time in 2016, I was overwhelmed with encouraging messages from our Samoan people.

“They gave me more motivation to do better and these are the people I’ve never met.”

Mauala-Dodson was unsure at first whether he would be representing Samoa at the Pacific Games.

“I was at the Oceania Games and thought I would make my way down to Samoa to see the team’s preparations for the games. And when, just a few days away, it was confirmed I was on the team it felt great.

“It meant a lot to represent for the first time and being here in Samoa [to] perform before my people.

“Although I was born in America, I’m just as American as I am a Samoan. 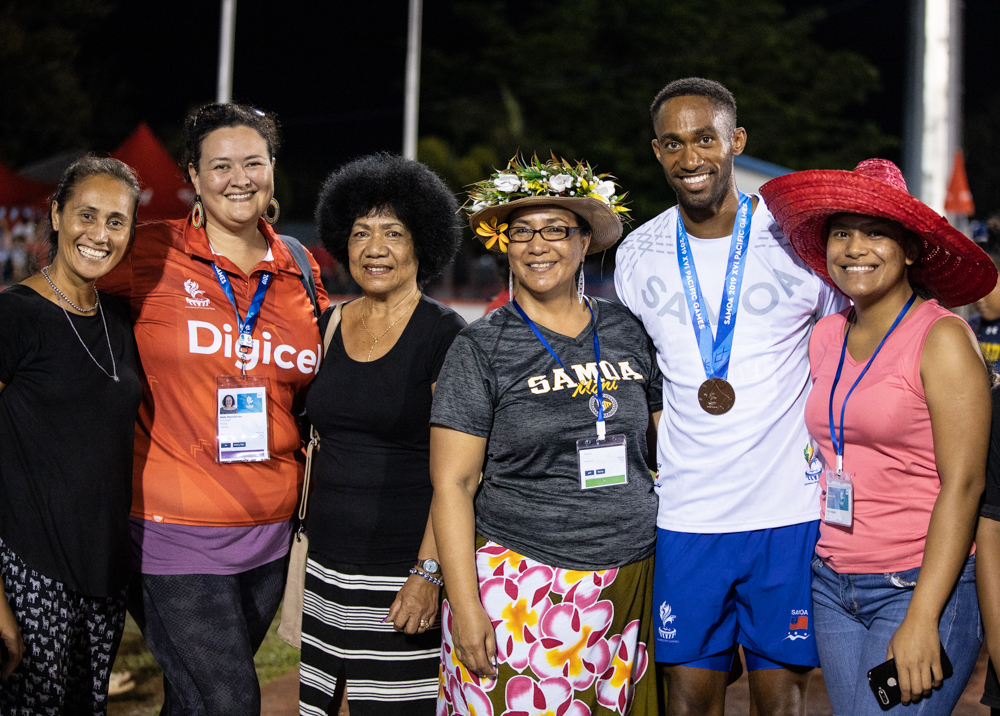 “Ever since I represented Samoa, the sport has become different and the meaning and motivation behind it has become way more meaningful than before.”

Mauala-Dodson said he will represent Samoa until he retires.  He also hopes to coach the track and field team in the future.

Asked about his recent name change (he was previously known just by his father's name, Dodson, but has now adopted a hyphenated surname) the athlete said that taking a further step to acknowledge his heritage meant a lot.

"My mother always wanted me to change my last name to Mauala, but to me its just a name. It wasn't until I came to Malie and visited my family, I realised that family names meant so much more and I couldn't be happier to carry my mother's surname from Malie".

Mauala-Dodson attended George Washington High School prior to beginning his tertiary studies at the University of Arkansas (UA) before transferring to the University of Colorado, where he earned a degree in Economics and Sociology with a minor in Neurophysiology. He was later accepted into the University's law school.

According to his website, while competing in college Jeremy was a four-time All-American representative (three times at CU, one at UA) and set Colorado records in the indoor and outdoor 200 metre sprint. Jeremy qualified for both the 2008 and 2012 Olympic Games.

Mauala-Dodson describes himself as a man of strong Christian faith and says that he aims to "spread love however possible to as many people as God has allowed him to.”

That faith helped him overcome a litany of health setbacks in his early athletic career. Mauala-Dodson lists himself as a supporter of the Pediatric Hydrocephalus Foundation. Hydrocephaly, or the abnormal build up of fluid in the brain, is a condition he was first diagnosed with early in his college career and which can cause tumours. He underwent chemotherapy/radiation while still competing and qualifying for the World Championships and Olympics.