Last week, the weightlifters won 33 medals including 16 gold medals to push up Samoa's placing on the medal tally in the XVI Pacific Games.

“His commitment and putting his all into pushing forward our athletes to the level they are now is something worth recognising and in return gives Samoa a good name and that is commendable," he said.

“I also want to acknowledge the commitment of this coach for the development of weightlifting in our country."

The team won 16 golds, seven slivers and 10 bronze in the Pacific Games and the four-in-one International Weightlifting Championship.

The Prime Minister was in awe of the tremendous support that the Wallwork family showed during the weightlifting tournaments.

“I want to thank his parents and sisters who were seen at the tournaments all the time, their commitment and strong support is amazing.

“The moral support shown is impressive not only for their Jerry but also for the athletes,” he said. 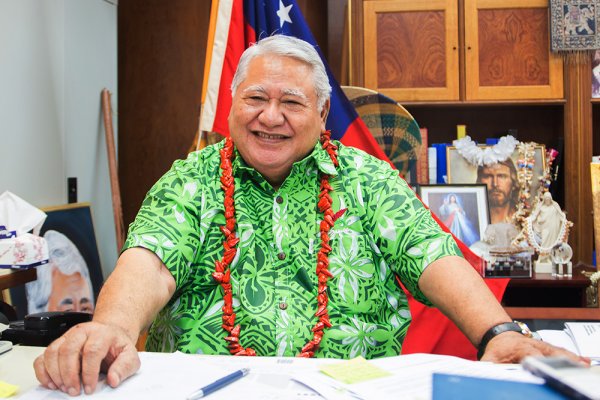 According to the Samoa Weightlifting Association (S.W.A.), the Samoa team for the Pacific Games secured a total of 33 medals, which includes 16 golds; six silver and 11 bronze.

For the Oceania, the S.W.A. received 24 medals with 16 golds; five silver and three bronze. For the Commonwealth, they secured 12 golds; seven silver and five bronze.

Tuaopepe was also pleased with the overall performance of his team, though he told the Samoa Observer recently that there were a few disappointments the previous Saturday.

“But some of them really did their best, it was their personal bests and they gave it their all."

“We had a target of close to 20, we could have reached it," Tuaopepe said.

But he said it is still Samoa's best ever Pacific Games result, beating the 14 golds achieved in the 2007 South Pacific Games.