More charges against senior Member of Parliament, La’aulialemalietoa Leuatea Polataivao and others, in relation to a nonu company trial, have been dropped.

The decision follows the prosecution filing amended charges on Monday in the Supreme Court. Some 134 charges have been reduced to 49 charges.

The changes is in addition to the 44 charges, relating to deposits made by unidentified sources to Samoa Nonu Delights bank account, withdrawn on Friday last week.

La’auli together with his wife Heather Schmidt, business associates Apulu Lance Polu, Martin Schwalger and Tuitui Aiolupo initially faced 234 charges. They pleaded not guilty to all of the charges.

The amended charges mean that the five defendants will now have to answer to 105 charges into the operation of the Local Partners and Associates nonu company.

La’auli was the first defence witness to testify on Monday when the matter resumed.

He spoke about plans to setup the Local Partners company in October 2012 with his then close friend and Associate Minister of the Prime Minister and Cabinet, Peseta Vaifou Tevaga.

The initial plan was to establish a company that will focus on construction works and engineering consultancy.

Having known Peseta for more than 20 years, La’auli described him as a “close friend” of his.

The initials L and P were thought to have stood for La’auli and Peseta, said the former Speaker of the House.

But when the company was registered, the Members of Parliament friends settled for Local and Partners Limited, agreeing to hold 50 per cent each of the shares.

The shares were registered under Martin Schwalger as La’auli’s representative, while Danny Schwenke acted on behalf of his father Peseta.

La’auli said his interest in nonu began back in 2009, when Executive members of the Reef Shipping company, La’auli Michael Jones, and another friend, Phillip McNichol, made contact with him, about an agriculture project in Samoa.

“They wanted to meet and discuss options of growing nonu and processing it to export,” said the senior M.P.

“But I had told them there are other people they can talk to about it, but La’auli Michael had told me he had done a survey and found that our constituency holds one of the biggest land mass in the country.

“Some 70,000 acres of land mass in the constituency is useful and the native nonu grows well on it and that was the reason why he wanted me to be involved.

“So I had told him I have to consult my village council because I don’t own any land they own it and I will get back to them on that.

“After the meeting with the village council they had agreed to be take part in the project and an agreement was signed to use the village of Sasina for piloting the project.”

It was sometimes in 2013 when the project through the Pure Pasifika company, went through a rough patch and a breakdown in communication with its partners.

La’auli and Apulu were involved with Pure Pasifika in 2010 up to 2013 when it went into receivership.

He added that when the Pure Pasifika company was not able to operate he had discussed with Apulu ways to sustain it.

“If the company (Pure Pasifika) does not continue it will affect me and my constituency that has invested in growing nonu,” said La’auli.

“It was them that came and made the announcement to my constituency about the benefits and their plans but now they have got into dispute with their partners the result will affect my constituency.

“I then discussed with Apulu ways to save the company and we made the agreements to setup a company that will help sustain the project.”

La’auli said he had assisted the then Pure Pasifika by getting the support from his village to be part of the project. 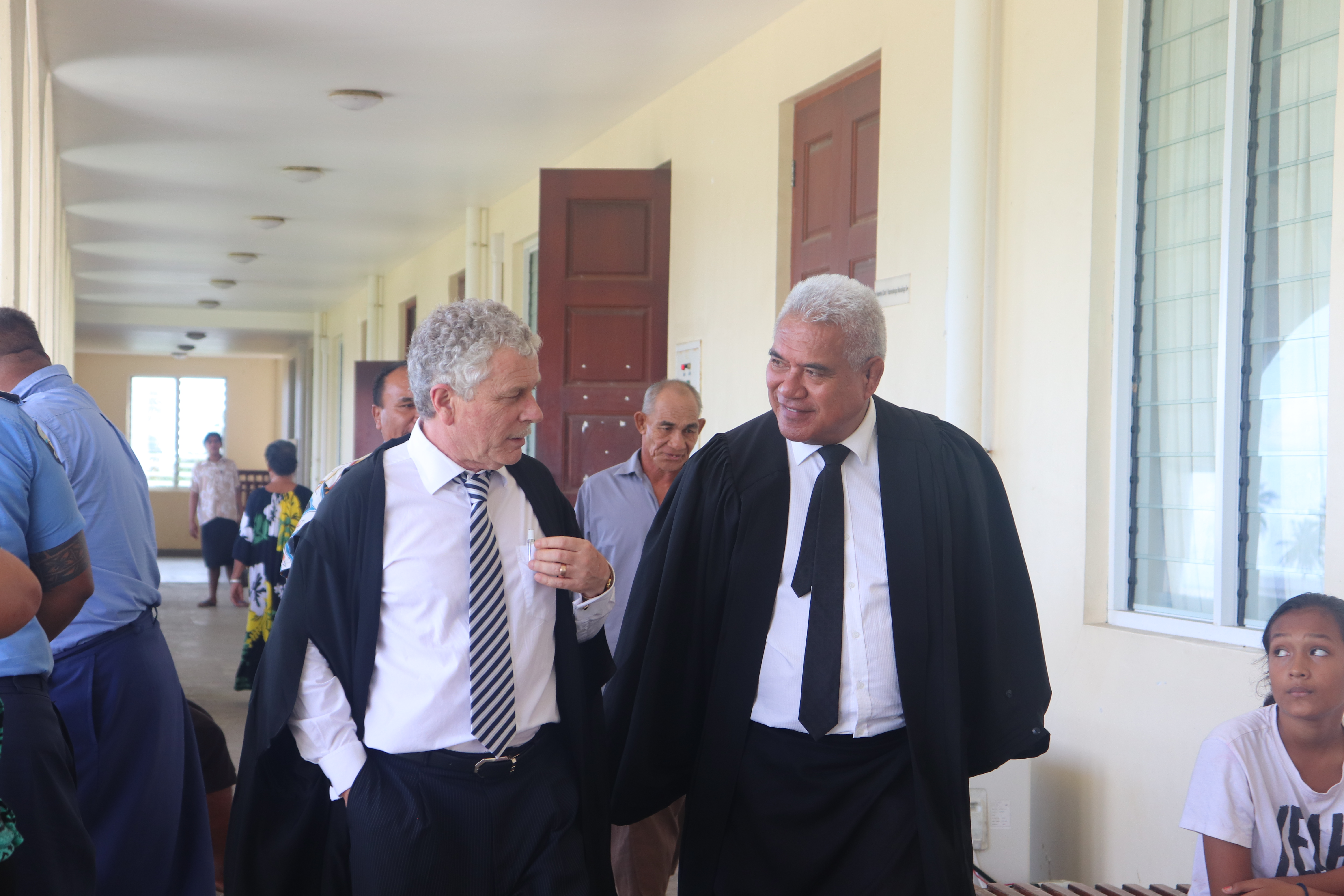 He had also spoke about the benefits of the project to the country in parliament and during government correspondence.

He believed that the project will help those at the grassroot level in terms of agricultural farming, saying that there were no agricultural produce exported at the time.

A total of 500 acres of land in Sasina was used to plant nonu to supply the project.

Asked what other ways he had assisted the then Pure Pasifika company, La’auli said he had also offered his land at Maota Samoa Vaitele as storage for nonu juice and other vehicles.

During the time he had discussed with Apulu about setting up a company to take over the Pure Pasifika company, when it went into financial troubles, he had suggested Peseta to join.

Despite Apulu not being happy with this, he eventually agreed to let Peseta join and become part of their plans, and a company name Local Partners and Associates was born.

The distribution of the shares is Peseta will have 35 per cent while Apulu and La’auli will hold 32.5 percent each.

Defence lawyer Aaron Perkins asked La’auli why they had agreed for Peseta to have more shares.

In response, he said his shares with Apulu when combined, they would still hold majority of the shares of the company in 60 per cent.

Furthermore he said that at the time Peseta had some financial problems, given his interest in joining the venture.

“I know this because there are times that he shares his financial problems with me and I had helped him on some occasions,” he said.

The trio then discussed bids starting from $1 million up to $2million to buy Pure Pasifika.

Upon submitting an application with the National Provident Fund for a loan, they were required to provide security for the loans.

Assets of the Pure Pasifika were also used as security for the loan.

According to La’auli this is his contribution with Apulu in the L.P.A. company, whereas Peseta also needs to put in a contribution.

The Court heard that Peseta had an overdraft of $102,000 on a piece of land at Vaitele belonging to Aldan company.

In his evidence, La’auli said Peseta had offered to use that land as security, if the overdraft on it is paid off from the bank to release it.

“He (Peseta) was happy to have the overdraft on his land paid off and to use it as his part of shares in the company,” said La’auli.

Upon setting up the L.P.A. bank account and cheque book, La’auli said he had put his trust on those that were signatories, Schwenke and Schwalger.

He did not have any problems with them signing the cheque book.

La’auli disputed Peseta’s evidence that he only received one cheque from the L.P.A. company.

According to La’auli, Peseta was given several cheques upon insistence that he needed some money.

He added Apulu and himself reluctantly allowed this to meet Peseta’s needs and it was only fair that they too should be paid the same amount given to Peseta.

This is despite the L.P.A. company early days in operation.

On the second week of May 2013 in taking over the possession of Pure Pasifika, La’auli said they had to organise the containers and vehicles at the compound in Vaitele.

He explained that when they took over there were about more than 10 containers blocking the factory and vehicles while inside of the factory was filled with other containers and nonu barrels.

La’auli testified that some of the containers had nonu barrel stored inside it, and this is because nonu needs to be fermented under a cover or shady place to avoid the sunlight.

Depending on which market the nonu juice is exported to, some are fermented for a year and others up to four years.

The process of fermenting nonu juice is they are stored in the barrel for a period of about a year and then they are taken into the factory to be processed, where the seeds and skin are removed while the nonu juice is extracted and used for export.

In arranging and organising the containers to free up the space at the L.P.A. compound, La’auli said they had to rearrange some of the containers.

He told the Court that some of the more than 10 containers that had nonu barrels inside belong to Reef Shipping (previous owner) and had written to have their containers returned.

For an easier transition and return of the containers and have the barrels inside it take out, La’auli said the containers were then transported to Maota Samoa.

He pointed out that the compound in L.P.A. was congested and the barrels of nonu were taken to Maota Samoa, to have it stored in his warehouse to keep it away from the sunlight.

La’auli is facing charges relating to nonu juice and vehicles of L.P.A. being in his possession at Maota Samoa.

In his explanation he said the nonu barrel were only there for storage due to the insufficient space at L.P.A.

The nonu barrels would still need to be taken back to L.P.A. factory for processing in order to extract the juice and separate the nonu seed and skin.