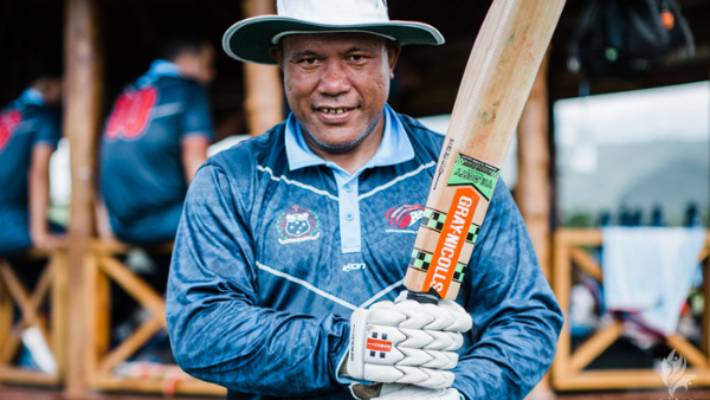 His name is well recognised for being a prominent Pacific sports figure, most notably as a star player for the All Blacks, Manu Samoa, Auckland Blues and the Hurricanes.

But this week, he is in Samoa for a different reason and a different sport. He is part of the Samoan cricket team for the XVI Pacific Games.

Ofisa says that his sports journey started at a young age where his love for it was first realised.

“I’ve always played lots of sports at school, mum and dad always encouraged me to do them,” he told the Samoa Observer.

Cricket was one of those sports and the former halfback is proud to be representing Samoa in the Pacific Games men’s T20 cricket competition.

It's not a new sport for Ofisa. He has been playing cricket since he was 14 years of age, mainly during the New Zealand summer, before committing to the 15-men sport full time.

“I played PIC senior cricket in Newtown in Wellington, and continued playing throughout the summer, because rugby was always in the winter. But eventually rugby took over a lot more of my time," he said.

While he has seen better days as a professional rugby player, he has always had an interest in cricket and followed the success of New Zealand cricket stars with Samoan heritage, Murphy Su’a and Leaupepe Ross Taylor.

Five days since the Games officially started on Monday, Ofisa still thinks of the opening ceremony on Sunday and the effect that it had on him as a Samoan.

“It was a proud moment to be walking around Apia Park again, the field that I played my first test on, and to be an athlete here is just so humbling.”

Ofisa credited Prime Minister Tuilaepa Dr. Sa'ilele Malielegaoi for bringing the Pacific Games to Samoa and preparing the country to play host in such a short time.

”So far I believe it is a very successfully run event, from the food to the sports, to everything. I’m extremely grateful to everyone who made it happen," he added.

Nevertheless he is honoured to be in Samoan colours again and knows that his selection in the team comes with responsibility – they have to get out to the field and do a good job.

“Play as hard as we can, contribute towards the team and just being a team player.”

Sharing his focus on the Games and his experiences in rugby with his team has given them a sense of togetherness.

“Sport is such a wonderful thing, and it teaches you many fundamental tools. Discipline. Respect. Attitude. Sharing those experiences while travelling and seeing the world and representing your country.

"To be able to play for Samoa, the amount of support you receive watching all the supporters out there watching you play and wishing you the best. It never changes whether it’s rugby or cricket or soccer – whatever it is, you do it well and you take the country with you. That’s why being a part of sport is a huge deal to me," he added.

Looking to the future, Ofisa said at his “tender age” he just enjoys the moment.

“Right now, we’re eyeing the opportunity of a medal so, what colour it is all depends on the next few days.”