Information, Communication and Technology (I.C.T.) development in the Asia-Pacific region has shown remarkable improvements over the past five years.

This was highlighted at the Asia-Pacific I.C.T. Ministerial meeting in Singapore where I.C.T. ministers from 32 members, including Samoa, and associate members of the Asia-Pacific Telecommunity (A.P.T.) gathered.

The dialogue focused on committing to a connected digital future for the region by adopting the “Singapore Statement on Co-creating a Connected Digital Future in the Asia-Pacific”.

According to a press release, the Singapore Statement sets out the vision of a connected digital future through the development of telecommunication / I.C.T. in the Asia-Pacific region.

It said the Ministers identified the following five new strategic goals in the Singapore Statement to guide efforts to build a connected digital future in the Asia-Pacific region:

A. Digital Transformation which aims to provide an enabling environment for telecommunication/I.C.T. development through improved telecommunication/I.C.T. connectivity and access for citizens and businesses so as to accelerate the digital transformation of the economy and society, which will in turn contribute to socioeconomic growth, innovation and better delivery of public services;

B. Digital Innovation and Creativity which aims to create an environment which is conducive for digital innovation and creativity, by introducing policies and frameworks that encourage emerging technologies, accelerate the growth of digital entrepreneurship, and promote international standards on telecommunication/I.C.T.;

D. Digital Trust which aims to encourage trusted and secured systems which promote the protection of data privacy, facilitate free and secure flow of information, and are resilient towards cyber threats, so that people can engage in online activities with confidence and openly share information online; and

E. Digital Capacity Building and Partnerships, which aim to build the digital literacy and skills of all citizens so that they will be well-equipped to work collaboratively, both within the telecommunication/I.C.T. sector as well as across other sectors, towards co-creating a connected digital future in the region. 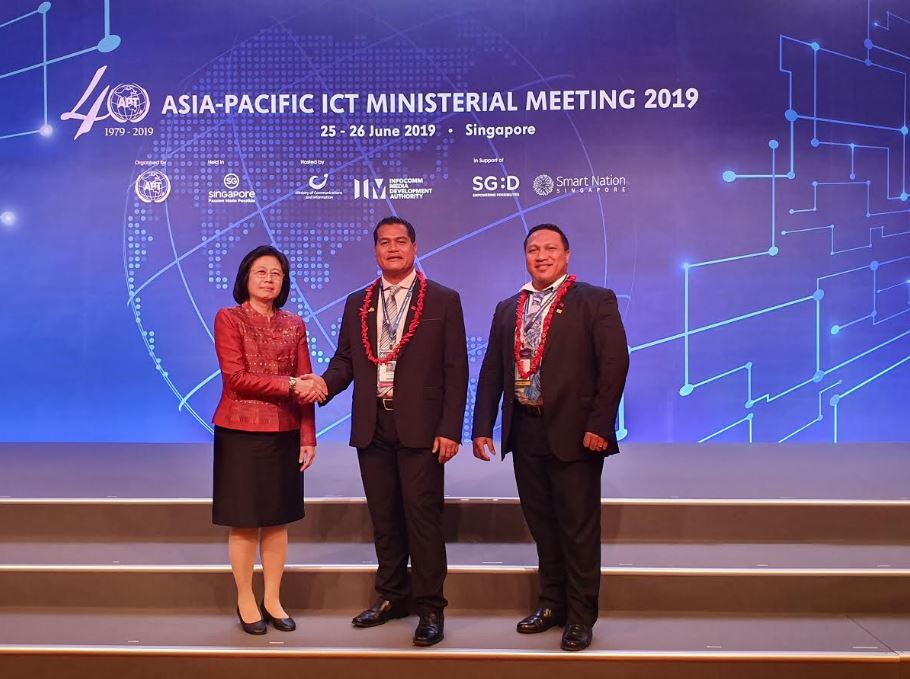 Madam Halimah Yacob, President of the Republic of Singapore, hosted the Gala Dinner at the Istana to celebrate the 40th anniversary of the founding of the A.P.T.

The A.P.T. was established in 1979 with 15 Members, including Singapore. It has since expanded to 38 members, four associate members and 136 affiliate members.

The A.P.T. is the only treaty-based intergovernmental organisation in the field of telecommunications/I.C.Ts created for the Asia-Pacific region.

It has played a key role in fostering regional cooperation and facilitating developmental initiatives, forums and capacity building programmes to support these developments.

Areewan Haorangsi, Secretary General of A.P.T. said: “The Singapore Statement will provide the guidelines for the next five years to lead the A.P.T. including all A.P.T. members and the A.P.T. Secretariat to co-create a connected digital future in the Asia-Pacific.

“Concrete action plans will be drawn up through the Strategic Plan of the A.P.T. to be adopted by the subsequent sessions of the General Assembly while the implementation of the Plans will be closely monitored.

“I believe this Singapore Statement will facilitate the promotion of widespread digital adoption in the region by providing fair and equitable access to I.C.T. services for all citizens in our communities.”