Toa Samoa has won their first game in over three years on Sunday morning (Samoan time), defeating the Papua New Guinea Kumuls, 24-6, at Leichhardt Oval in Sydney in their opening match of the Oceania Cup.

Having lost their single test in 2018, and after a poor showing in 2017 where they managed a draw and four losses, coach Matt Parish would have been glad his side kicked off the new era of international rugby league with a win.

An offload from prop, Josh Aloiai, who was a late inclusion into the starting 13, gave hooker Jarome Luai some space, and he stepped past two players to score.

Papua New Guinea started to work their way into the game, but Samoa still looked the more likely team to score and did so in the 22nd minute.

This time it was Luai setting up Aloiai, with a wonderfully disguised pass from dummy half creating a huge hole close to the ruck for the Wests Tigers forward to cruise through.

A penalty for a Toa Samoa high tackle let the Kumuls begin a set at the attacking 40, and they took advantage in the 30th minute.

Winger Terry Wapi scored from dummy half close to the line to close the deficit to one try.

Both sides made errors in the last 10 minutes, and the Kumuls would’ve gone into the break encouraged to have kept within a try. 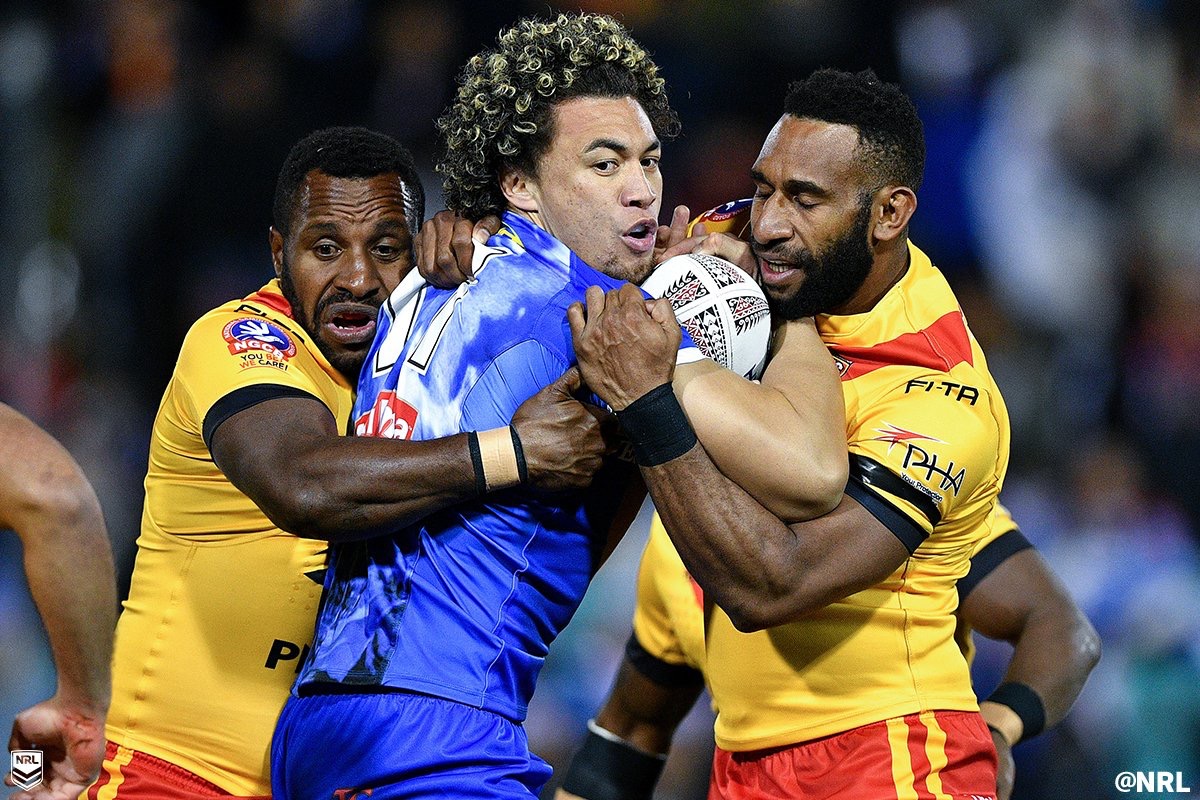 The had the better of the first five minutes of the second half too, getting three attacking sets in a row before a James Segeyaro forward pass let Samoa off the hook.

Neither team could execute that all important final pass to split the defence upon, and as such it remained 12-6 until the 66th minute.

The Toa Samoa kept it simple close to the line, and prop Junior Paulo broke three tackles and crashed over for a try.

Standoff Chanel Harris-Tavita attempted a field goal to seal the match with four minutes left, and he was first to react to the ball hitting the post, scoring an opportunistic try.

The final scoreline possibly flattered Toa Samoa slightly, as the Kumuls were tricky opponents that made them work hard for the win.

Martin Taupau and Jamayne Isaako both stood out having walked away from the Kiwis to join Toa Samoa.

Taupau was a real handful in possession, always looking to offload while Isaako was tidy at the back and had a perfect night kicking for goal.

Captain Anthony Milford and Chanel Harris-Tavita both made things happen in the halves, and did well enough with their kicking in play.

Toa Samoa will reconvene at the end of the year for their second Oceania Cup match against Fiji Bati on November 2nd at Eden Park in Auckland, New Zealand.