One Scrap Metal is trying to rid Samoa of toxic e-waste by shipping it off shore but is taking them years to fill a container.

Owner, Potoi Peteli filled a container in a span of four years, which he successfully exported, but another four years into collection he has filled a quarter of a container.

E-waste is anything that has a battery or motherboard in it. Mobile phones, computers, photocopiers, fridges, printers all contain electronics that need to be disposed of separately to their plastic or aluminium casings.

At One Scrap Metal, six men work daily dismantling e-waste by hand, separating its parts into massive piles and extracting the electronics for export.

“It’s too dangerous. The battery acid is no good for the environment,” Mr Peteli said. 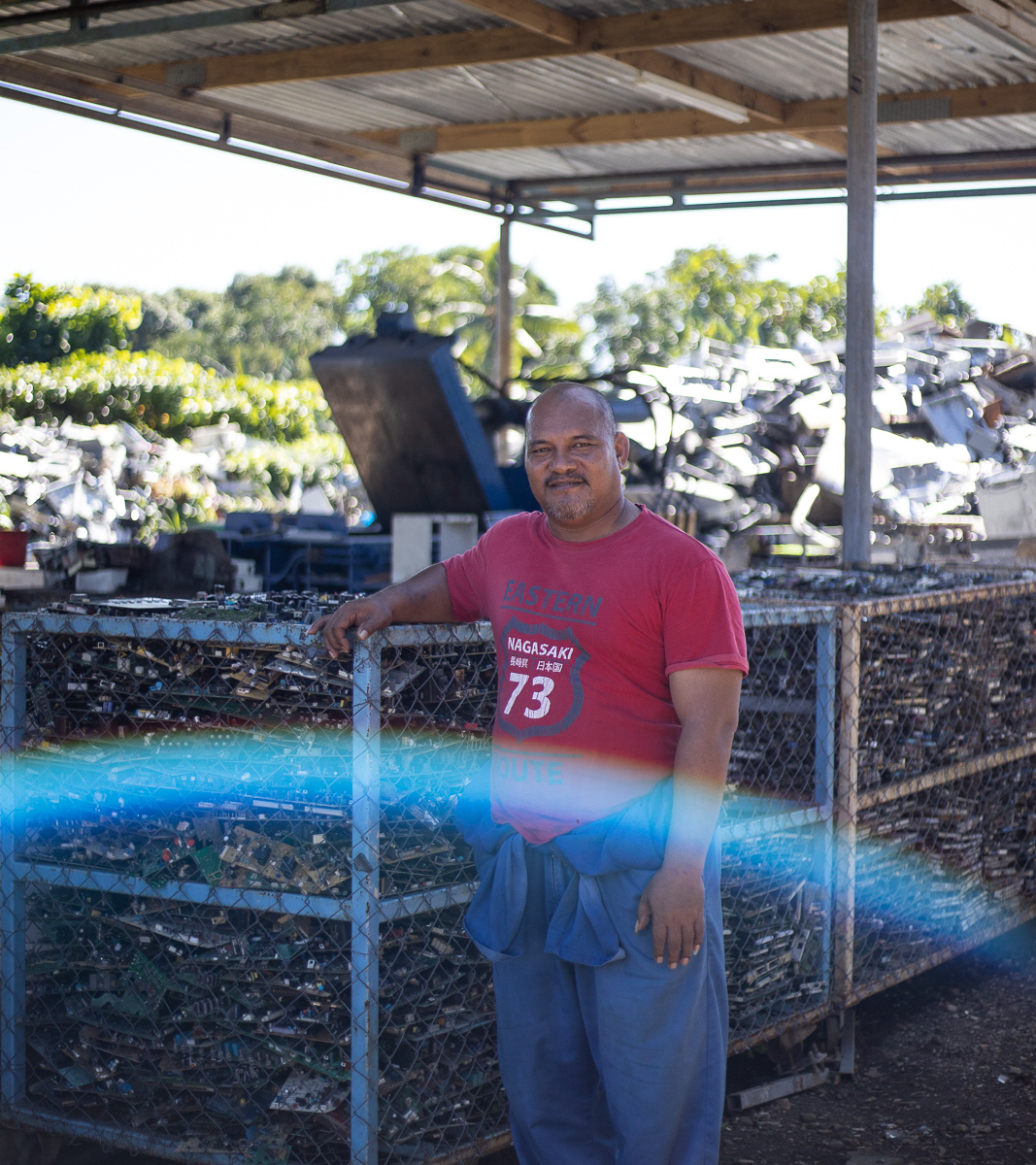 Though he and the team have dismantled likely tens of thousands of broken electronics, the small motherboards take barely any space. But overseas buyers who can process the motherboards won’t accept less than a full container.

“We need all the people of Samoa to deliver their e-waste here, and we’ll separate it and export it.”

Mr Peteli pays five sene per kilo of e-waste. He said that often works out to about $20 per car load, if people bring a lot at once.

It takes two or three hours to dismantle large items like photocopiers and computers, and slightly longer for fridges or freezers. Something smaller might take half an hour.

“We need power tools but I don’t have power tools, just normal tools like pliers, grinders, screw drivers, cutters, and the power of course.

“It’s dangerous but we wear safety masks and gloves,” he said.

A partnership with Samoa Stationary and Books (S.S.A.B.) has helped, with S.S.A.B collecting e-waste from their customers and delivering it to Mr Peteli, for free.

Just this weekend, they delivered nearly two containers of e-waste to One Scrap Metal, which he believes will take two months to fully dismantle. But it is worth the work, Mr Peteli said.

“I have made some deals in Australia, China and Bangladesh,” he said.

In March  2018, the Secretariat of the Pacific Regional Environment Program (S.P.R.E.P) signed an agreement with S.W.I.R.E Shipping to export low value waste from the Pacific Islands for a low price, or in some cases, for free.

Mr Peteli said the Moana Taka Agreement (M.T.A.) guarantees free freight for e-waste, a savings of thousands of tala. Now, he actually stands to profit from his and his team’s effort, even if small.

Frank Griffin, Hazardous Waste Management Adviser said it is hard to profit from low value waste like hazardous waste, so the Moana Taka agreement with S.W.I.R.E. Shipping is an invaluable resource.

“Because we do not have a fully matured, fully developed industry, we cannot say that it is going to be profitable in the long run,” Mr Griffin said.

“Many of the big companies that have made a business out of it are depending on subsidies coming to help fund the waste management systems in the country.

But while the industry may not make millionaires of its labourers, it is an essential service, Mr Griffin continued. 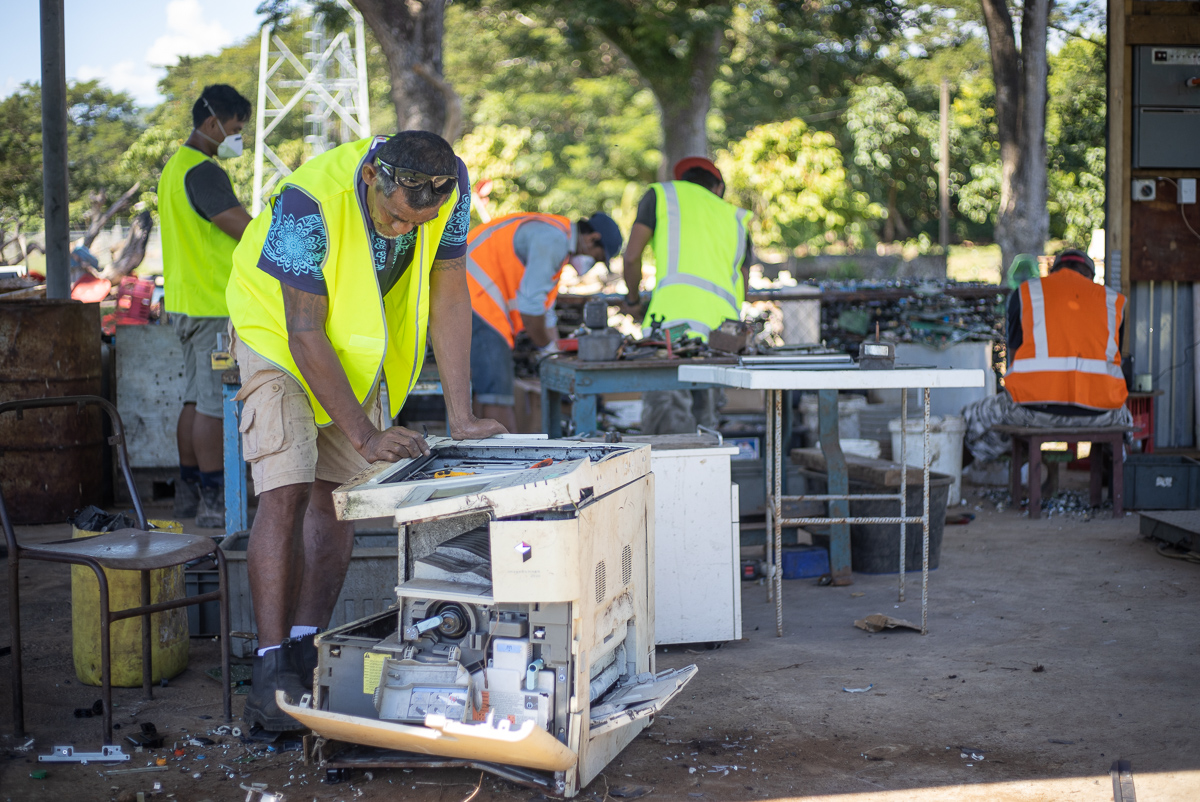 “If we do not have governments taking on the responsibility you’ll find the Pacific Islands will lose its paradise image very quickly, because there will be waste everywhere.

Mr Peteli said he thinks with S.S.A.B’s partnership, and by encouraging more people to bring their e-waste to his shop it won’t take too much longer to fill the container, and keep shipping e-waste out of Samoa.

S.S.A.B also has a partnership with Hewlett Packard Enterprise (H.P), where HP collects and ships away their products from Samoa out of their pocket.

One Scrap Metal is a member of the Samoa Waste Recycling Management Association (S.W.R.M.A). They work together as waste stream recyclers to clean up Samoa, and support each other to find buyers for their collections.

Recently S.W.R.M.A successfully lobbied Government to institute a waste levy, and a taskforce has been established to research it.

One Scrap Metal is located towards the bottom of Vailoa Street of Vaitele St in Vailoa. Mr Peteli can be contacted on 7762598.

CORRECTION: A previous version of this article stated S.S.A.B was selling e-waste to Mr Peteli. However, that is incorrect - S.S.A.B is in discussions to give e-waste to him for free,  and are not profiting from any arrangements. We apologise for any inconvenience caused.