The Fijian Latui have defeated Kagifa Samoa by six points for the second time in a month, winning 31-37 in the two sides’ Global Rapid Rugby matchup at Pukekohe in New Zealand.

Kagifa Samoa made a strong start with ball in hand, getting themselves into position for a driving maul from a lineout early.

But the Latui defence held well, and they were able to turn the ball over.

The Fijians soon had their own attacking lineout, and after a couple of phases, prop Luke Tagi got himself a mismatch with Kagifa first five Luke Makris, and crashed over him to score after about 12 minutes.

About five minutes later, the home side earned another attacking lineout five metres from the line, and this time they took advantage with halfback and skipper Leon Fukofuka scoring from close range.

The Latui bounced back almost immediately though when Kagifa made a poor decision to attempt an offload inside their own 22, which was intercepted.

The ball was given to second five Jone Manu, who scored their second try of the game inside of 20 minutes.

As the rain began to really set in, hooker Mesulame Dolokoto scored for the Latui from a lineout drive, before another try to first five Enele Malele made it 5-24 with 30 minutes played.

Hooker JP Sauni scored a crucial try for Kagifa right on halftime to keep them within two scores, but errors meant the first half was a struggle for the team representing Samoa.

Things looked to get worse when Fukofuka was sinbinned for infringing at the breakdown, but Kagifa were able to hold out with Makris deputising at halfback.

In fact the first five scored at the other end against the run of play, taking his team within five points after the conversion.

But the Latui’s response was immediate, as they smashed through the ruck as Samoa tried to clear, got the ball to lock Peni Naulago and scored, making it 19-31 with 10 minutes played in the second half. 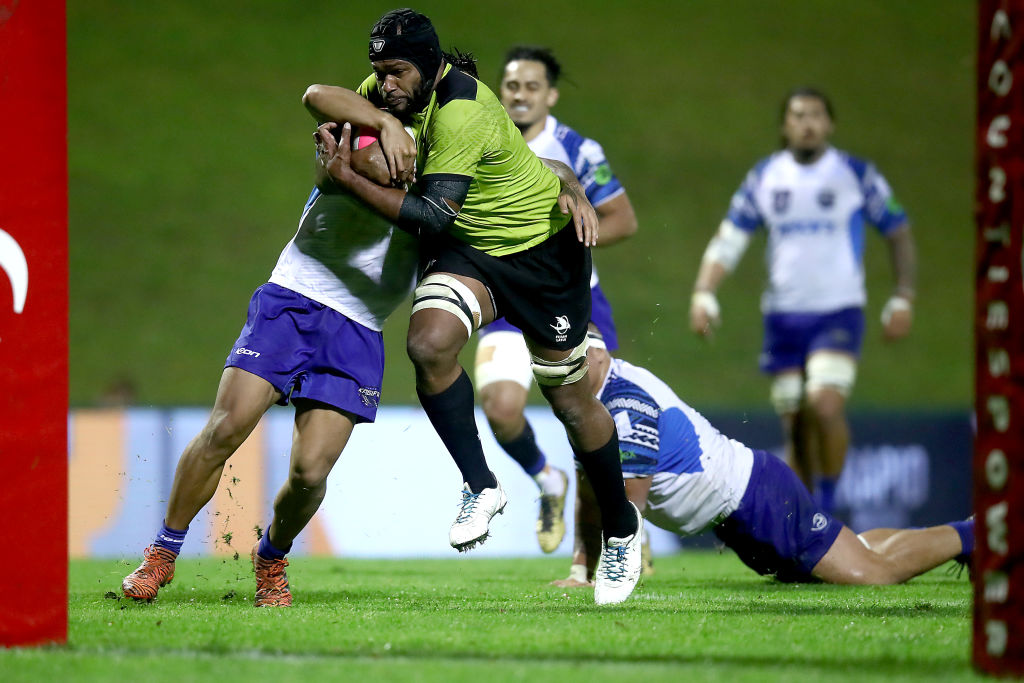 Makris was injured in that ruck and had to leave the field which was a major blow for Kagifa Samoa.

His intelligent kicking sparked much of their best play in the first 45 minutes, and for a short time Kagifa had to play without both their halves.

Neither team was able to create much offensive pressure through sustained phases, until Kagifa pulled themselves together with 12 and a half minutes remaining in the game.

Centre Tino Mafoe went right to the tryline but lost the ball in the act of scoring, however they were playing under advantage for an offside penalty.

Cynical play from the Latui’s Eroni Mawi for another penalty saw him yellow carded, and he was soon joined by Meli Nakarawa who was binned for a deliberate knockdown.

Referee Cameron Stone awarded Kagifa a penalty try as well, and Samoa were now within eight points with 11 minutes remaining, playing 15 against 13.

The Latui kept the ball in tight, and muscled their way up to the five metre line where they won a penalty.

Malele duly made the kick to leave the score at 26-37, with the Latui now having a two-score buffer.

Kalione Hala scored for Kagifa with three minutes left, but they were unable to complete the comeback and remain winless after three Global Rapid Rugby matches.

Former All Black Zac Guildford was electric at fullback for the home team and the 30-year-old said he enjoyed himself in his debut.

“The rain slowed it down a bit.

“It was good, pretty fast game, there wasn’t a lot of structure.”

He said he is interested in playing more Global Rapid Rugby next year depending on if the organisers can put a full competition together.

Kagifa Coach Lemalu Semo Sititi said he hopes Guildford is in the side for next week’s game against the Western Force in Queensland, but it will be a challenge putting a team together for that game with players going back to commitments with their clubs and unions.

“I think we played a lot better in the second half than the first half,” Sititi said.

“Shows how much we can do with only two trainings in a week.”

Captain Leon Fukofuka agreed that the team picked things up after half time, by identifying space and using it better.

“When we trust our system, trust our skills, things go right for us.”

Kagifa Samoa’s game next week against the Force is on Saturday at 6:40 pm Samoan time.

Alvarez adds another title with 8th-round TKO of Saunders

Alvarez adds another title with 8th-round TKO of Saunders