Peter Tulaga is accused of the attempted murder of Frysna Rimoni. (Photo: Facebook)

The trial of a man facing an attempted murder charge – among other charges - in relation to the shooting of a woman on the face started in the Supreme Court yesterday.

Peter Tulaga is accused of attempting to murder Frysna Rimoni on the 15th January 2018.

The prominent farmer from Vailoa Faleata faces four charges; one count of attempted murder, one count of grievous bodily harm, one count of being armed with a dangerous weapon and possession of an unregistered firearm.

He has pleaded not guilty to all the charges.

At the beginning of the trial, the Court heard that issues of trust between the two and the accused being suspicious towards Ms. Rimoni sparked the disagreement, which led to the alleged shooting.

The Court heard that Ms. Rimoni was in a relationship with Tulaga at the time.

She survived the ordeal after being evacuated to New Zealand for surgery. The prosecution told the Court that Ms. Rimoni would give evidence from New Zealand via a video link. She will be among prosecution witnesses including Police officers, family members, doctors and others. 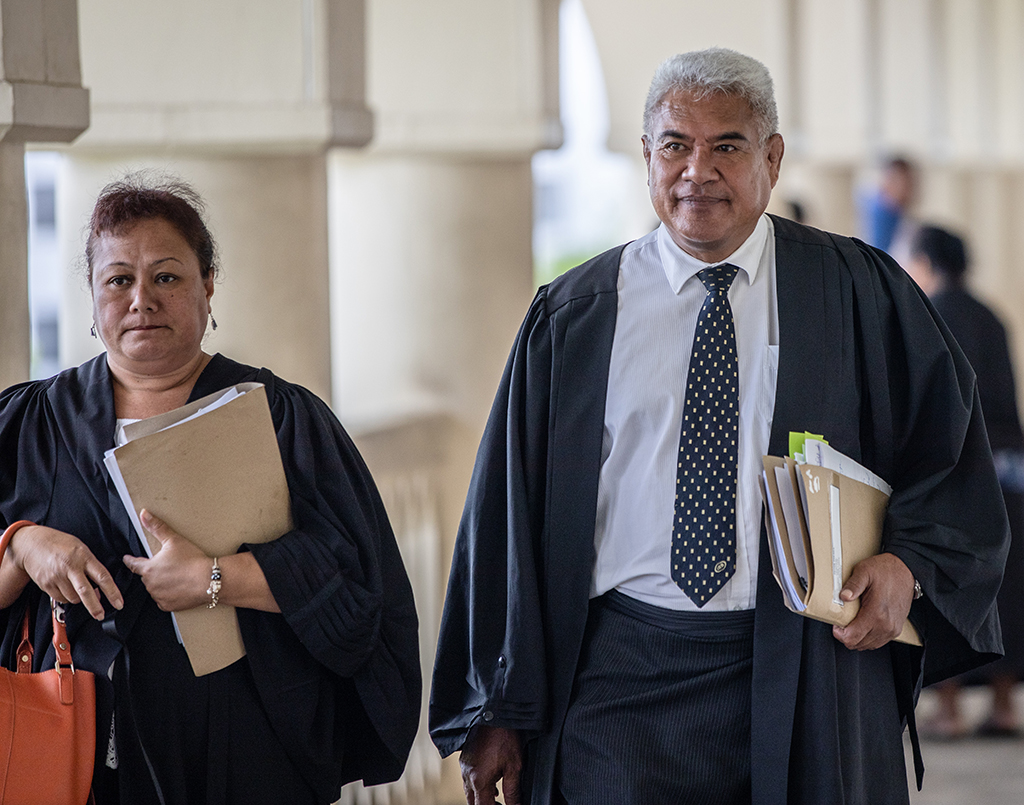 One of the first witnesses yesterday was Frieda Alesana, a nurse who was on duty that night. She recalled that at about 7pm, a woman was brought to the emergency, assisted by another woman.

“I went to the taxi where the woman was in and I saw she had no face,” said Ms. Alesana. “From what I saw she had no nose, eye and her face was shattered. I had asked the lady that brought her (Ms. Rimoni) in what the woman’s name was, she said she did not know, it is her brother’s girlfriend.”

Ms. Alesana said she questioned the woman that brought in Ms. Rimoni about what had happened.

“She told me that her brother stabbed her with a glass and had shot her,” she told the Court. “I asked the lady why and she said her brother was mad and the woman had lied (to him).”

Ms. Alesana said she had told the lady who assisted Ms. Rimoni that she needed an identification of who she is and a relative of the wounded woman. At this point, Tauiliili objected to the evidence from the nurse saying it is hearsay.

He said the prosecution had not raised this with the woman that brought in Ms. Rimoni when she gave evidence.

The woman in question is Melania Tulaga, the sister of the defendant.

Prosecutor Magele said the witness is giving evidence of what she was told by Melania on the night.

However, Tauiliili said the nurse has not identified Melania and the evidence she had given has not been put to Melania.

Justice Tafaoimalo then ruled that Melania could be called in again so that she can be asked about the evidence from Ms. Alesana.

During cross examination, Tauiliili asked Ms. Alesana that she would not have known how Ms. Rimoni had sustained the injury if it wasn’t for what she was told by Melania that a sharp objected was used.

In response, Ms. Alesana said: “I wouldn’t say that. The woman presented injury to her left hand and it looked like it was an injury caused by a sharp object or a knife.”

Another nurse who gave evidence was Pelepesite Lemalu, who was also a Supervisor on the night Ms. Rimoni was taken to the hospital.

Ms. Lemalu said she recognised Melania when she brought in Ms. Rimoni. She said they attend the same church.

“I had asked Melani what had happened,” said Ms. Lemalu. “She told me her brother Peter shot the woman on the face. I also asked her who the woman was she said it was Peter’s girlfriend and does not know where she lives.”

Asked to explain what she saw, Ms. Lemalu said she does not have the words to describe what she had seen and the condition of the woman when she was brought in.

“Her face was incomplete,” she told the Court.  “I could only see one of her eye, she had no nose and teeth.”

Tauiliili, in cross-examination, asked Ms. Lemalu if she had seen what had happened, or whether her evidence was based on what she was told by Melania.

In response, Ms. Lemalu said her evidence is based on what she was told by Melania. 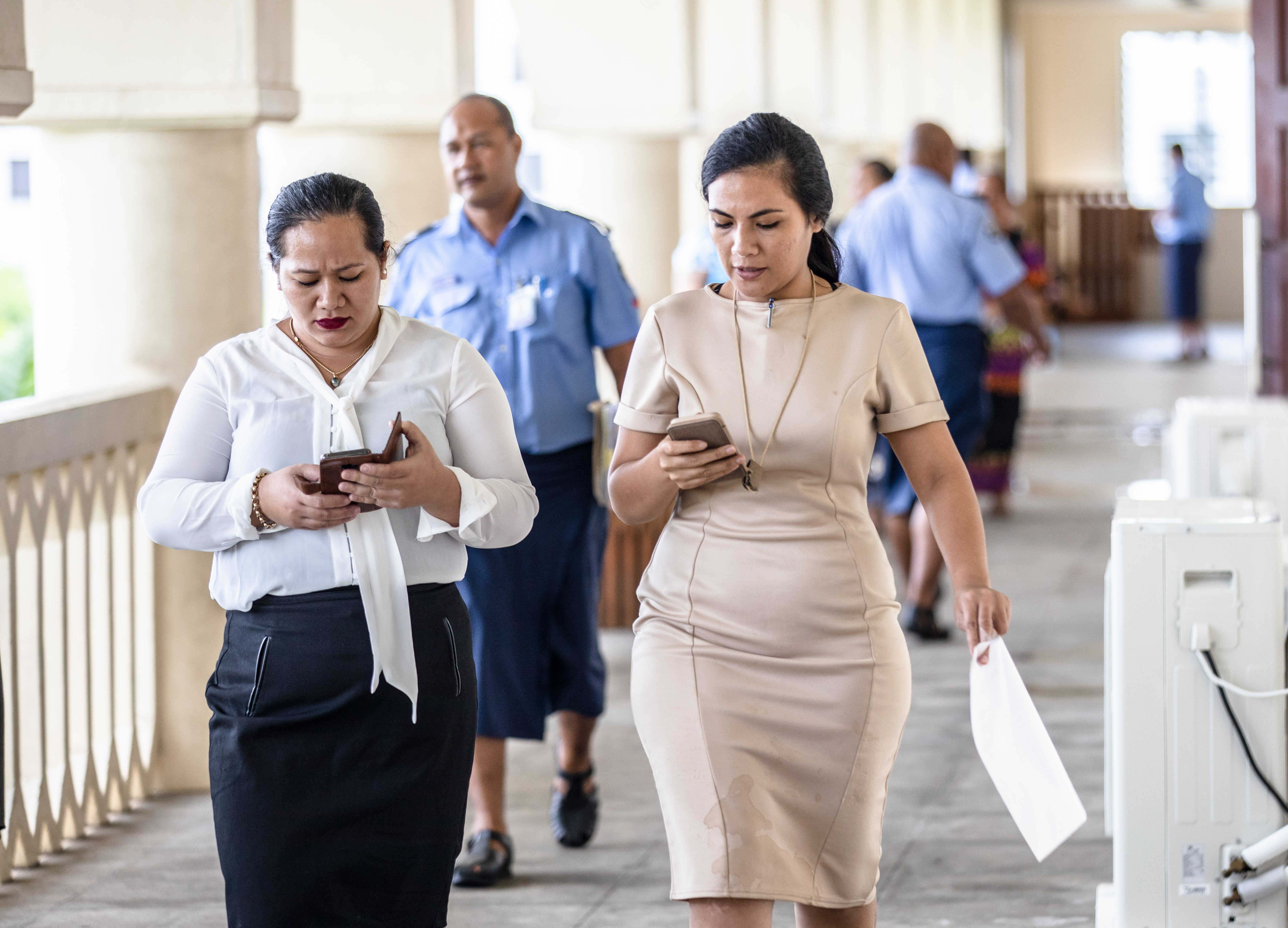 A Senior Correction Officer of the Samoa Prison and Corrections Services, Auina Fepuleai, also gave evidence. He recalled that on the 15th January 2018, he received a call around 7:30pm. from the officer at the gate that someone by the name “Peter Papali’I” wanted to see him.

The witness said when he met Tulaga, he was quiet and had blood on his left hand, and it was injured.

“I had asked him why he came and he told me his wife was injured from a gun because they were playing with the gun,” said Mr. Fepuleai. “I had advised him we are not the ones to deal with his case, and that he has to go to the Police station at Faleata.

“But he told me that while they were playing with the gun, his wife got hit on the side of her stomach. He looked worried as if something was bothering him.”

Mr. Fepuleai said he contacted the Police station at Faleata to let them know about Peter.

Another witness was the sister of Ms. Rimoni, Margret Rimoni.

On the day of the incident, Margret was in Savai’i for work when she got missed calls on her Facebook Messenger from Tulaga. Margret said when she did not answer but she had sent a message to Tulaga, which said “Yes.”

Not long after she sent the message, she received a call again from Tulaga.

“When I answered the phone, he didn’t say anything right away but I could hear that he sounded like he’s crying. I asked what was wrong, he then said 'she’s gone, she’s gone'. Then he said to me ,'I’m going to do this'.”

Margret said she tried calling back Peter but he did not answer.

“What came to mind when he said she’s gone is that my sister was dead. I was worried and I was away (in Savai’i).

The Court heard that Margret resorted to posting a public status on Facebook in which she tagged Tulaga asking for his whereabouts. At around 8:20pm on that day, Margret said she received a message from her sister Sarona saying; “we found her”. 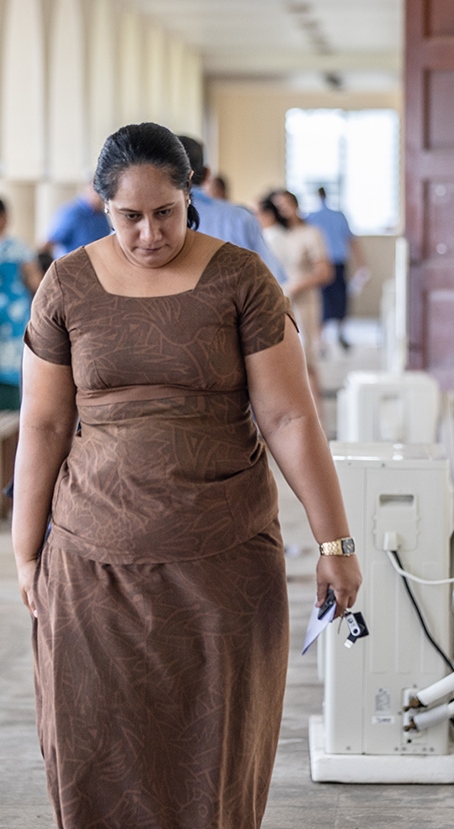 He told the Court that Peter is the youngest of 10 children. The house in which the incident occurred belonged to his mother, who is 73-year-old.

Pr. Petelo told the Court he lives on the same land as his mother but his mother’s house is further up the hill. He said he was made aware that something had happened when his nephew came to him and told him to come, something has happened.

When he got to his mother’s house, he saw Peter talking to his sister Melania and his twin brother, Paulo.

Not long when Peter had left the house, Pr. Petelo said they had heard someone’s voice from inside the house and it sounded as if someone is in need of help.

His sister Melania and twin brother Paulo went inside the house and later came out looking disturbed.

“I then went inside and saw a woman with her back towards me,” he said.

“I saw what has happened and I then came out and asked my sister to use their car to take her to the hospital. When I saw her face (Ms. Rimoni) I felt really sorry for her seeing the serious injury on her face.”

Justice Tafaoimalo asked Pr. Petelo to explain what he meant by serious injury.

He told the Court that her “jaw was gone.”

Melania Tulaga told the Court she was the one that took Ms. Rimoni to the hospital. Questioned if she was aware of what had happened, Melania said she does not know what happened between her brother and Ms. Rimoni.

“I did not see anything or know what happened,” she said.

It was also Melania’s evidence that she was the one that found the gun that is alleged to have been used for the offending and had taken the handbag of Ms. Rimoni from inside her car.

“I took the handbag out because there are a lot of kids at home. I handed in the gun and the handbag the next day to the Police."

Another sibling of the defendant that took the stand was Feagai Smith.

Mrs. Smith said she received a call from her sister, Melania saying that a woman had been injured from a gun and she was Tulaga’s girlfriend.

She told the Court that Tulaga had also contacted her if she could take him to the Police station.

“I went with my husband to pick up Peter and we went for a drive. I told Peter when he is ready then we will drop him off (to Police),” she said.

“We made a stop to buy him some food until he said he was ready.”