Samoa's most wanted criminal still on the run 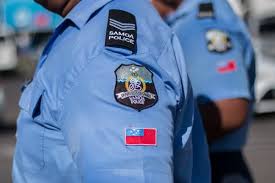 The criminal has been on the run for seven weeks after he fled the Tafa'igata Prison with another prisoner, Aniseko Vaelei, during a church service.

Thanks to efforts by Police with assistance from the public, Vaelei was captured with $10,000 found on him.

Mr. Chong Nee was last seen through CCTV footage from a Moamoa shop which he and Mr. Vaelei broke into and robbed.

They are also believed to be main suspects behind the robbery of personal effects from a University of South Pacific (USP) lecturer and his family.

The criminals stole canned food, cigarettes, alcohol and a Digifix phone at the Moamoa shop and according to the Police disguised themselves by wearing military-type clothes, hoodies, baseball cap and sunglasses.

During a previous interview with Police Commissioner Fuiavaili'ili Egon Keil, he said they will not stop until they have located the remaining escapee.

“Please do not approach Mr. Chong Nee as he is considered armed and dangerous,” said the Police Commisioner.

The wanted criminal is a 25-year-old from the villages of Aleisa and Vaitele Fou and was serving time for theft and burglary.

Members of the public have been urged to contact any nearby Police stations or the prisons main headquarters and the Ola Toe Fuataina at Tafaigata with the contact numbers: 23516, 22208 and 21008, concerning any information relating to the escaped prisoner due to the severity of crimes they were charged with.