N.Z. actor flies in for ‘aloFA’

Ali Foa’i is a Pacific mix from Niue, Tokelau, Tuvalu and American Samoa.

Last week the busy actor flew in from New Zealand to appear in a play, ‘aloFA’ written and directed by Fiona Collins and showing in Apia this month.

“I’m very excited at the opportunity to be in Samoa as part of this exciting and important piece of theatre, ‘aloFA’ by Fiona Collins,” he said after days and evenings of hectic rehearsals.

Foa’i is currently completing a Masters in Scriptwriting at the International Institute of Modern Letters at Victoria University in Wellington, New Zealand.

In an ‘informal snapshot’, Foa’i shared these words about himself with his fellow M.A. Scriptwriting students in Wellington earlier this year.

“Raised in Westy Aukilani suburbia not too far from the black beaches and jungley foothills of the Waitaks.

Performer, playwright and avid traveler of the world.

Pursuing an inherent interest in indigenous storytelling and love for good stories.

Here to learn to spin a good yarn cinematically brilliant and beautiful.

New to the capital.

His journey from attending school in Auckland to appearing on stage and screen was not without its challenges.

In an interview a few years ago in an Auckland newspaper, Foa'i said his parents had had very specific dreams for their eldest son when he was about to kleave school.

They were horrified when they learned he wanted to go to drama school.

"They wanted me to be a doctor or a lawyer," Foa'i said.

When your parents have migrated from another country to give their children a better life Foa'i understands the battle that can ensue when ideas clash.

But as the years have gone by, his parents have got used to the idea of their son being an actor.

They became more supportive as they saw the travel and job opportunities Foa'i has had since then.

After graduating from UNITEC’s Performing Arts School as an actor in 2006,

Foa’i appeared in the drama series ‘Ride with the Devil’.

His screen credits include ‘Diplomatic Immunity’ and ‘Shortland Street’.

Foa’i made his professional stage debut in 2008 at the Pacific Arts Festival in Pago Pago, Amerika Samoa, in Dianna Fuemana’s play ‘Falemalama’. He then toured with the work in Auckland, Niue and Toronto.

Foa'i performed Fuemana's play ‘Birds’ in Auckland and festivals in Niue and the Solomon Islands.  He most recently appeared in ‘Thirsty’, a one-man show he wrote that premiered at Bats Theatre, Wellington in August this year.

‘aloFA’ will be open to the public each evening from Saturday October 22-29 at the Maliu Mai Bar and Grill in Fugalei with tickets available from McKenzies store in Pesega, Legends Café in Moata’a or by ringing Filoi at 7200069 or Fiona at 7683486. 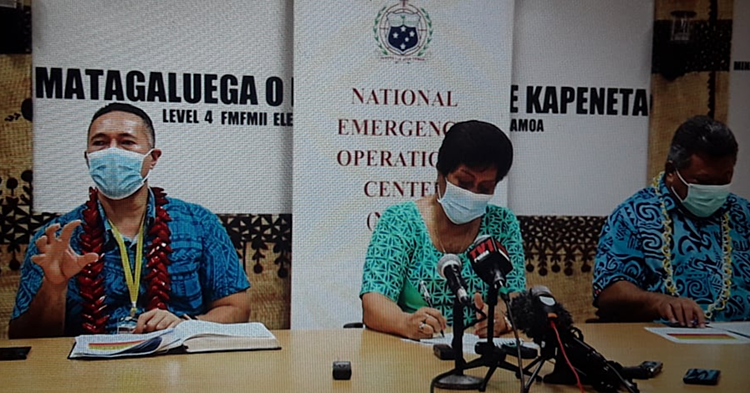 A 70-year-old is the second suspected case of covid-19 in the country, the Director General of Health Leausa Dr. Take Naseri has confirmed.

Fears about the coronavirus spreading to Samoa has forced the Government to postpone the repatriation flight from Los Angeles, United States of America, that was scheduled for Friday.

Leadership by Samoan women and girls during the COVID-19 pandemic has never been more important to ensure their voices are heard, says Australia’s High Commissioner to Samoa, Sara Moriarty.