The work of two senior reporters for the Samoa Observer were recognised by the International Labour Organisation (I.L.O.) for their contribution in covering Child Labor in the Country.

During the commemoration of World Day Against Child Labour and the World Occupational Safety and Health Day, with the launching of Light Work and Hazardous list event at the United Nations Conference room yesterday, the late Ilia L. Likou, Samoa Observer Senior Reporter, was recognised.

Chief Reporter Joyetter Luamanu was also presented with a Recognition award for their reporting on street vendors.

Ms. Likou’s articles highlighted the dangers of street vending for child vendors as young as four years old having to sleep on the streets and selling wares until late. She gave a voice and a face to the young vulnerable children that many in Samoa turn a blind eye to.

The local I.L.O. Coordinator, Tomasi Peni pointed out that in the light of the above – I.L.O has recognised the great contribution of the Samoa Observer through Ms. Ilia and Ms. Luamanu’s efforts.

About the late Ms. Ilia Likou, Mr. Peni said: “This year we remember her good works as you can see all the articles around the room and the banner we prepared for her works. I.L.O. with much appreciation would like to remember her.”

A moment of silence in remembrance of Ms. Likou and her service to the cause; was observed.

Guests were then invited to view a display of her written contributions through the Samoa Observer for raising awareness on the issue of street vending.

For Ms. Luamanu, Mr. Peni said: “In this year – on the Media Spotlight Recognition Awards – again through Samoa Observer, we have Ms. Joyetter Feagaimalii Luamanu as the recipient of this year Media Spotlight awards."

“So from the Media – we have Samoa Observer as the recipient of this recognition award along with few other partners from different sectorial.”

The awards were presented by the Ministry of Commerce, Industry and Labor Chief Executive Officer and Chairman of the Samoa National Tripartite Forum, Pulotu Lyndon Chu Ling.

“I feel honoured to receive this award on behalf our colleague whom we dearly miss, friend and sister Ilia.

“I feel a mixture of sadness and pride at this time knowing that in her lifetime, Ilia used her God-given talents to help make a difference to so many different communities in our country.

“She has left a lasting legacy for someone so young and while we are still devastated at the loss of our colleague, we feel comfort in knowing that she continues to live through her written work.”

A former Minister of Works, Transport and Infrastructure, Lemalu Enokati Posala, has confirmed his candidacy for next year's General Election. But he is running for a different constituency. 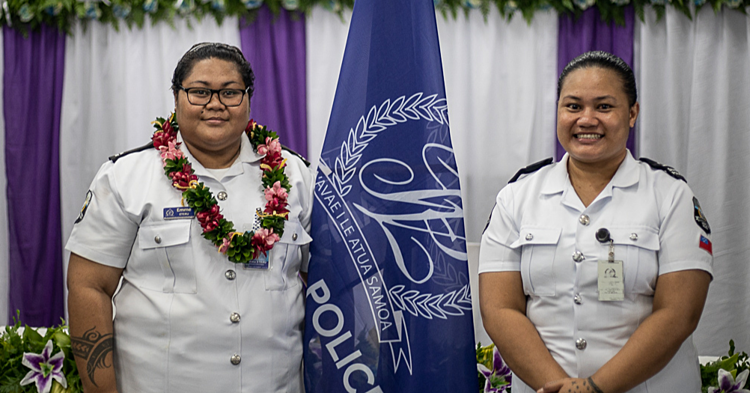 Police Commissioner, Fuiavaili'ili Egon Keil, has challenged women to “shatter the glass ceiling” in terms of recruitment into the male-dominated law enforcement sector.

Commercial farmer, Papali'i Panoa Tavita, who was among two candidates to challenge the Electoral Act, said the law change has allowed him to qualify for the election by using his monotaga from previous years. And he wants other aspiring candidates to be aware that they too can qualify.