The exact number of athletes expected to converge in Samoa for the 2019 Pacific Games would not be determined until Games time.

But until then, the Games Organising Committee will work according to data and analysis collected from previous Games in terms of accommodating athletes and officials.

This is according to Pacific Games Council Executive Director, Andrew Minogue, who was speaking during a press conference last week.

“It’s a very changing picture right up until Games time, the athletes will have to be entered into the system 45 days before the Games, which from memory is around the third week of May, but right up until the teams leave their countries to come here, they are making decisions from within that list of people,” he said.

“It’s not until the very end then you get the number for the athletes.  This is definitely a challenge for us trying to adjust to the number of athletes.

“We have an accommodation plan for the Games, which is quite ambitious and we need to make sure it works, and it works for our host in terms of planning, especially for athletes who don’t show up.”

At the moment, more than 4,500 athletes and officials are expected, and out of that number more than 3,000 would be athletes.

“This is the first time for athletes to be hosted in hotels and the participating countries seem very happy about it.”

In terms of broadcasting the Games, Pacific Games C.E.O. Falefata Hele Ei Matatia said there is a process and they are working towards getting the right equipment and people to cover all the 26 Games.

“So there is a strategy that the office of the Pacific Games is working towards to ensure that we don’t have only the facility, but the right people to do that work here, including other Pacific media personnel and media stations to help our local people to distribute that equipment and coverage.”

Twenty-four countries from across the region, including Australia and New Zealand, who have been invited to participate in eight of the sports, will participate in the Pacific Games to be held in July next year.

The former General Manager of Polynesian Airlines, Papalii Grant Percival, has criticised the planned closure of a flight route between Nadi and Apia, saying it will threaten Samoa Airways’ survival. 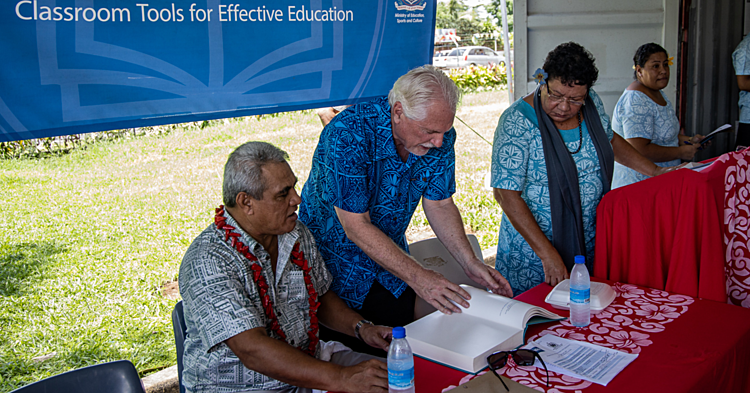 More than 25,000 books were donated to the Ministry of Education, Sports and Culture (M.E.S.C.) by the American organisation Applied Scholastics International to boost the literacy and numeracy rates of students in Samoa.