Fa’aolesa stands up for Apia

The contest for the Vaimauga West No. 2 seat in the upcoming General Elections is a battle of the lawyers.

During an interview with the Samoa Observer, Fa’aolesa said he has his sights set on developing the Apia area.

“The roads, electricity and water in Savai’i are as good if not better than Upolu,” he said.

“That was true ten years ago but it is time now for the H.R.P.P. to redirect its attention to Upolu and in particular Apia.”

The candidate did not mince words.

“The roads are deplorable,” he said. “The Cross-Island Road is long overdue for expansion with footpaths and resealing. At Tanugamanono to Tiavi, it is a bomb waiting to explode with pedestrians literally walking on the road because there are no footpaths.”

A resident of Leufisa, Fa’aolesa is also concerned about the quality of water.  “We call it town yet the water in Savai’i and rural villages is treated (compared to us),” he said. “The water has not been metered in some areas such as Moto’otua to Vailima. We are still drinking untreated water in Apia, the capital of Samoa. The roads in the villages of Papauta, Palisi, Vailima and Matautu and others have not been tar sealed.

“Although Apia is the capital of our country, our village in our political history, has never been afforded the opportunity to represent Vaimauga in the decision making process of our modern day nation.

“To do so, would fulfill Apia’s hopes and aspirations.”

Turning to his opponent, Fa’aolesa criticised Lefau saying he hasn’t been vocal enough about the issues concerning the constituency.

“The people are crying out for simple things,” Fa’aolesa said. “They are not crying out for the world. They are asking for treated water and better constructed roads.”

Asked why he has decided to side with the H.R.P.P., the former Chairman of the Electric Power Corporation Board said he believes in the party.

“Tautua is not voicing anything different beyond what H.R.P.P. is doing,” he said. “They are just criticising but they have no new ideas. It is no secret that our children from Vaimauga West are among the most vulnerable to peer pressure and temptation due to its proximity to the Apia town area.

“To that end, I fully endorse H.R.P.P’s role as the leading advocator in early literacy education efforts, which is essential to starting children on the right foot and addressing deficiencies starting from the kindergarten level. In my view, this will make all the difference in graduation rates and college enrollments, and I couldn’t agree more.

“Education after all is the key to unlock economic prosperity for our country which includes in Vaimauga West.”

About the opposition, Fa’aolesa said it is an essential component of operating a good governance.

“The existing Tautua Party is not doing enough to bring to the fore the real issues and challenges that our country faces,” he explained. “That is what they should be focusing on. Complaining about the debt, for example, is a non-issue and reflects their party’s mindset. With the exception of their leader, Tautua members are not vocal enough in Parliament during debates.

“The public do listen, evaluate and draw conclusions regarding the issues debated in Parliament.”

One of Fa’aolesa’s desires is to see more economic opportunities for Samoa. He pinpointed the need to attract foreign investment.

“Direct foreign investment brings to Samoa many opportunities that result in improving the lives of our residents including those of our constituency,” he said.  “It will create jobs, improve infrastructure and increase the spending capacity of our citizens. Of course foreign investment brings many problems that are facing our societies today. However, that is why our legislators should be forever vigilant to create laws that will minimize the adverse effects of foreign investment.

“At the end of the day, our citizens get to decide what is good for them. Living in a life that our forefathers experienced or subscribe to the modern way of living our country is a relatively poor country with next to zero natural resources.

“Our GDP is amongst the lowest in the world and we are still classified as a Third World country by the United Nations. That is why I fully endorse our government’s efforts to borrow money to fund its many projects that does improve the lifes of our people. That is the test of a good government.”

Furthermore, Fa’aolesa emphasise the need to support the efforts for private sector to invigorate businesses entrepreneurship.

But he does not believe the government is doing enough in the area.

“The government is not expected to do everything, we should play our part, as private business owners, to diversify our businesses and be innovative in our ideas. For the government, it should foster competition and solicit new markets for our products.”

Fa’aolesa hails from the villages of Apia, Malie, Salani, Lalomanu, Iva and Sapapali’i.  The 52-year-old is married with three children.

A former student of St. Joseph’s College he has been practicing law in Samoa when he was admitted in the local bar in 1996. Prior to that he had studied at the University of Hawai’i and California where he obtained his degrees.  He is also a member of the American Samoa and the United State’s lawyers association. 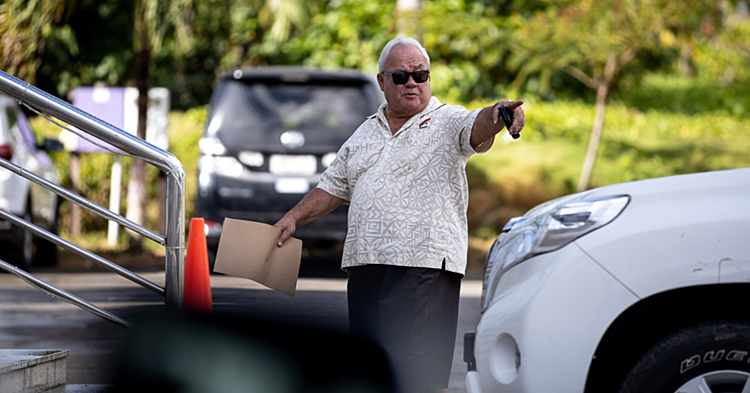