Mother and baby in custody over debt

A young mother and her two-month-old baby are in custody at Tafa’igata Prison after she failed to repay $1,147 she borrowed from another couple.

Yesterday, the woman’s mother, Aveave Sio, fought back tears when she told about how the incident has traumatised her family.

The idea that the Police could allow a young baby behind bars is chilling, she said.

Aveave said her daughter, Tafi’au, had failed to pay the money plus interest. The couple had apparently lodged a complaint, which led to her daughter being locked up in custody.

The elderly mother said what happened came as a shock to her and her children because they were not aware her daughter owed money to anybody.

“It happened on a Friday two weeks ago,” said Aveave.

“We were at home with my children when a car pulled up in front of our house.

“A police officer came and said they were looking for my daughter. I asked him why and he said they have been sent by the people whom my daughter owed money to.

“There was an order for her to go with the police to negotiate and talk about what can be done. They said my daughter did not pay some money she owed which is $1,147.”

Uncertain and taken by surprise by what was happening, Aveave said she asked her daughter to go with the officer. That was the last time they saw her that day.

Tafi’au is a mother of nine children. Her youngest son is two-months old.

“The police officer who talked to me that day was holding a paper and he told me that paper contained information about how much my daughter owed.

“He didn’t say they were going to lock my daughter. He said they needed to take her so she can sort things out with the people who sent them.

“So I agreed to let her go. They left around 12 in the afternoon and so I had to look after my grandson.

“Tafi’au was gone for a while and I was beginning to worry because the baby wouldn’t stop crying.

Tafi’au’s husband was worried and he insisted he would take their two-month old son to the mother, assuming that the police had already locked up Tafi’au.

“This was around six in the evening,” said Aveave.

“Not long after my son-in-law left with the baby, a police car came to our house.

They came and told me that my daughter is in jail and that they were coming to pick up my two-month-old son because my daughter was begging them to bring her son as she was still breastfeeding him.

“I was angry because they lied to me when they first came and I told them that my son-in-law was on his way with the baby to be taken to his mother.

“I was furious when I found out what was happening.

“How can they allow a baby in jail? They should’ve told me in the beginning that they were going to lock up my daughter. But the police officer who came first lied to me.”

At this point, Aveave said she felt helpless and didn’t know what to do next.

“The only thing I did was pray… it was hard for me to accept what was happening.”

the next day, Aveave said she visited the couple who sent the police over to their house.

“They are not strangers,” said Aveave. “They are also related to my late husband. I told them how disappointed I was with what was going on, especially with the fact that my two-month-old grandson was in jail because of something his parents did.

“And it’s not like my daughter stole money or committed a serious crime. I understand if they are angry that my daughter did not pay the full amount she was supposed to pay, but to me it was too much as my grandson was involved.

“I begged them to withdraw their complaint so that my daughter and grand-son could come back home.

“I was trying to sort it in the Samoan way (ava fatafata) because we are related. I told them that my children overseas were willing to pay them money so they can release my children.”

Later her eldest son from Australia called her and asked for the phone to be given to the couple. They made a deal on the phone.

Aveave and his children would have to pay half of the money owed by Tafi’au and they will withdraw the complaint and release Tafi’au and her son on Monday.

“This was on Saturday,” said Aveave. “So my son sent told me that they sent the money on Saturday. So on Monday they received the $500 and we thought they were going to release my daughter on Monday, but that was not the case.

“On Monday, we waited for them but there was no update from them. My son-in-law came home from work and he had $100 and then he went to the couple and gave them $100.

“So that’s $600 altogether. “But after Monday, they didn’t release my daughter.

“I talked to them and they said they couldn’t withdraw their case with the police and court. So apparently, there was nothing they could do.

“But we were told that we still had to pay them the other $500 that was left. But they didn’t keep their side of the deal which was to release my children once we pay them half of the money.”

Aveave said they were informed that her daughter would be in jail for four weeks.

Aveave said they were surprised when they saw the police van on Tuesday in front of their house.

“On Tuesday, we were shocked when the police car pulled in front of our house and my daughter Tafi’au hopped out of the car with the baby.

“She said they just got back from the hospital. My grandson was sick.”

“Any parent and any mother would never want to see her children, especially daughter going through something like that.

“And I hope no other mother would go through what I am going through.

“Her (Tafi’au) other children couldn’t stop crying when they saw their mother…I couldn’t hold back my tears.

“I am more concerned about my grandson. He is only two months old and he is living in a different environment. I am not sure if it is safe for the two of them to be there. It’s just too much for me to handle.

“I can only pray for my daughter and her son right now.”

Aveave said her whole family has been traumatized by what has happened to her children.

“It’s been hard ever since they took her to jail. She’s got eight children, and her husband is working.

I am looking after them right now. It’s hard to look at them most of the time as they are always looking for their mother most of the time. Especially my grand-daughters.

“This has been really hard for me and family you know with people talking and saying bad things my family and my daughter.

“I am trying to hold it together for the sake of my grandchildren.

“My son-in-law took my grandchildren to visit my daughter at Tafaigata on Sunday, but I didn’t go. I just don’t want to see her behind bars especially my grandson and the situation they are in right now. ”

Aveave said her eldest daughter who resides in New Zealand is likely to arrive next week and they are looking at taking legal action.

Asked for a comment yesterday, the Police’s spokesperson, Su’a Muliaga Tiumalu said he was not aware of the case and that he would have to look into it. 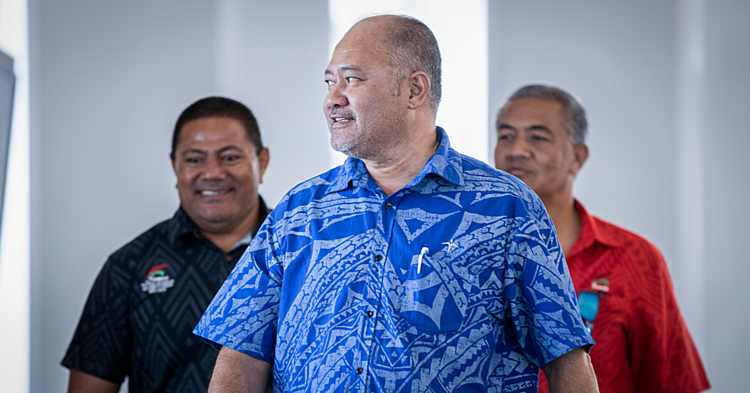