The key role by the Village Councils in maintaining law and order was a feature of yesterday’s General Elections.

At countless villages across Upolu and Savai’i, the authority exercised by the Alii ma Faipule was vital in keeping the peace.

In many villages, Police officers allocated to the polling booths were extremely grateful.

“It’s only me here but the village has done a great job with making sure everything goes well,” a Police officer, who spoke to the Samoa Observer on the condition of anonymity said.

“If something happens here, I cannot control it but having the matai of the village gives that reassurance.”

Faumuina Pio Felise, of Gagaifolevao, said their village was prepared. “A lot of us are here to help the police officers in making sure that everything goes smoothly during the time of the voting,” he said.

“We make sure that once a person has already voted, that they are not hanging around the polling booth.”

He also said that they are very strict.

Iosefa Matua, of Salamumu, said the environment was cordial because of the mutual respect as part of the fa’asamoa.

“It’s been a quiet election this year to be honest but we have to expect the unexpected. You never know. So far it’s been good,” he said.

“We have to look out for any drunken people who might cause trouble and keep an eye on those trouble makers.”

“We have to be strict because as you know the voting on our side is very tough because this is where the Leader of the Tautua Samoa and the Minister of Works Transport and Infrastructure Manualesagalala Enokati Posala are against each other.

“We have three candidates running from here so we have to keep a close eye on all the voters especially those trouble makers just in case they start trouble. “So those are the preparations that we have been prepared for from so long and so today we wish all the candidates and the voters as well a blessed election.” 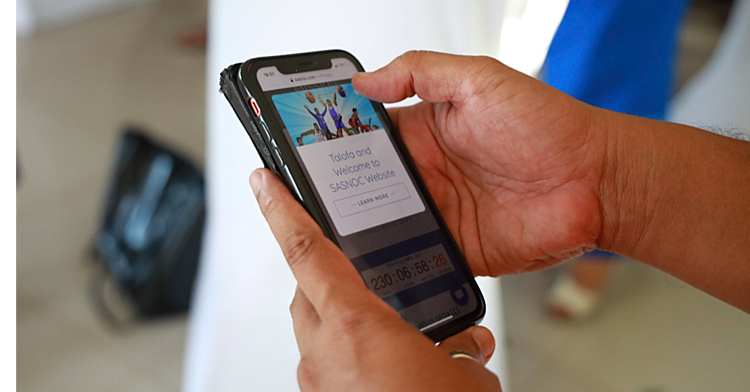 The Samoa Association of Sports and National Olympic Committee (S.A.S.N.O.C) celebrated the launching of a new website on Friday.