The increasing number of murders, manslaughters and grievous bodily harm connected to alcohol abuse has led to a call for alcohol use reforms by the Samoa Law Reform Commission.

“Three quarters (approximately 72%) of all murders, manslaughters and grievous bodily harm offences were committed under the influence of alcohol and/or drugs.”

This is according to the S.L.R.C report in response to a request from the Attorney General in 2014 to review laws relating to the sale and consumption of alcohol.

The objective targets reducing the harm caused by alcohol in Samoa and to make recommendations for reform. The report was submitted to Parliament last year.

According to the report, the impact of alcohol in Samoa is significant, and it has been often cited as the main contributing factor to serious offending.

Most families and communities have been affected directly or indirectly by harm caused by excessive alcohol consumption.

“The review was to deal with a number of issues including, adequacy of current alcohol licensing system and its enforcement; availability of cheap alcohol; alcohol taxation and pricing; controlling alcohol content in alcohol; age at which alcohol can be purchased; advertising and promotion of alcohol and responsibilities of parents, Village Fono and churches with respect to adolescent drinking,” says the report.

The report says there is no current comprehensive data available on serious offences where alcohol was a contributing factor, many members of the judiciary have expressed that excessive use of alcohol and the availability of cheap alcohol was a common contributory factor to many criminal matters before them.

“This view is reiterated by representatives from the Ministry of Police (Police), the Ministry of Justice and Court Administration (M.J.C.A) and the Samoa Victim Support Group (S.V.S.G).

“All suggesting that serious crimes such as sexual offending and domestic violence is often strongly linked to excessive alcohol use or where alcohol was consumed beforehand.”

The report indicates that almost every week the media reports on crimes of a serious nature involving alcohol.

“It was also noted by many owners of businesses where alcohol was consumed, that fights often broke out when patrons were heavily intoxicated in the premises or upon leaving the premises.”

“Criminal offending fuelled by excessive consumption of alcohol was also at the forefront of concerns raised by numerous members of the public during consultations about their experiences in the community.”

The challenges faced by the Commission was trying to obtain official statistics on crimes in Samoa where alcohol was a contributing factor.

These statistics revealed an increasing trend of serious offences over the years, which were alcohol and or drug related.

“In 2012, 43% of these serious offences were committed under the influence of alcohol and/or drugs. There was a slight increase in 2013 to 51% of offences.

“In 2014, there was an alarming hike in the statistics revealing almost three quarters (approximately 72%) of all murders, manslaughters and grievous bodily harm offences were committed under the influence of alcohol and/or drugs.”

Traffic offences are also common offences where the presence of alcohol is a contributing factor.

The reported incidents of driving under the influence (D.U.I) have fluctuated over the period of 2009-2013.

“There are 28 reported incidences of alcohol in breath in 2010 alone, and none in any other years during this period. Also, during this period there is also only one case reported of selling alcohol without a license in 2011. It is not clear whether the low number is attributed to poor enforcement or in the case of alcohol licences, whether there is improved compliance by businesses selling alcohol.”

“The statistics are quite unsettling given that these offences are not low level or minor offending but are very serious, violent offending.”

According to the report, in 2011, 72 people were charged with intoxication in public areas and in 2012 there was a 139% increase amounting to 172 offences. The next year was a further 70% increase or 294 reported cases.”

The S.L.R.C report also points to statistics from the Ministry of Health which has a significant number of deaths resulting from alcohol related diseases over the period of 2010 – June 2014 at the Tupua Tamasese Meaole Hospital at Moto’otua.

This does not include data from the Malietoa Tanumafili II Hospital in Savai’i and other district facilities. The information received on the number of alcohol-related deaths during this period was much higher in men than in women. The highest incidence of alcohol-related diseases between 2009-2014 was diabetes mellitus or type 2 diabetes.

“After type 2 diabetes, hypertension is the following most common alcohol-related disease which resulted in death within that period. “Heavy alcohol consumption also resulted in a high number of deaths from cerebrovascular diseases or strokes and heart failures.

“Diseases such as cirrhosis of the liver and alcohol use disorders were much less common and recorded only a few deaths.”

The often less visible dimension of alcohol related harm includes child and family abuse and neglect and this was illustrated in a submission from S.V.S.G where it highlighted that from 2011-2013, over 320 domestic violence cases were lodged with their organization.

“Alcohol was a contributing factor in 70% of these domestic violence cases. S.V.S.G also recorded that about 65% of the victims were exposed to verbal abuse and sustained physical injuries.”

The submission from S.V.S.G identified sexual abuse cases reported to their organization where alcohol was a contributing factor.

In 2011-2013 there’s a steady increase in sexual crimes where alcohol was a contributory factor during that period.

“In 2011, there were 45 sexual abuse cases reported to S.V.S.G, which increased significantly by 67% to 75 cases of sexual crimes reported the following year in 2012.

“There is widespread acceptance by the public that long term alcohol use has significant and permanent effects on an individual’s health.”

The Government has warned that the loss of Samoa’s terrestrial biodiversity is worsening despite the progress that is being made in achieving most of its environmental goals. 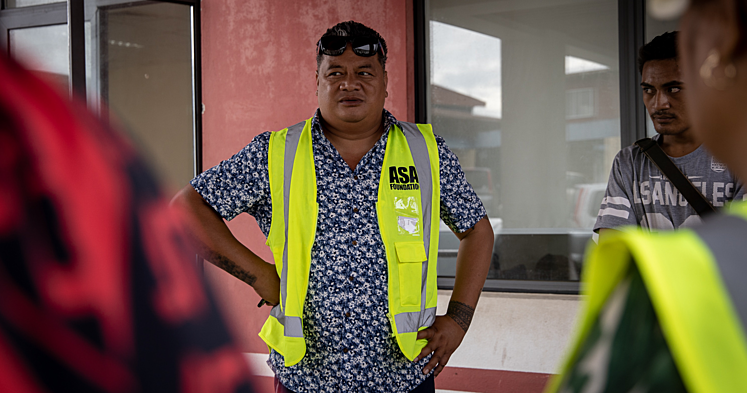 Last week, Ms. Goebel walked on the Government House stage in a flowery gown representing her Samoan culture to receive recognition for her what she does for – something others can only dream of – her services to dance.