Samoa ushered in the new year with spectacular fireworks with hundreds of people converging on the Apia township before midnight to catch a glimpse of the show.

The country became the first in the world to welcome 2022 with the Prime Minister Fiame Naomi Mata'afa amongst the spectators at the seawall adjacent to the Government Building.

The fireworks was launched from Palisi which overlooks Apia's central business centre with five pyrotechnic experts, who were brought into the country by the Samoa Tourism Authority (S.T.A.), setting up and overseeing the pyrotechnics show.

The show started at the stroke of midnight – though rain also fell simultaneously and at one stage threatened to throw the spanner in the works – but this did not stop people from seeking out vantage points on the seawall and the roadside to see the show.

Pictures posted on social media showed the Prime Minister accompanied by her friends on Apia's seawall with umbrellas as they watched the fireworks. 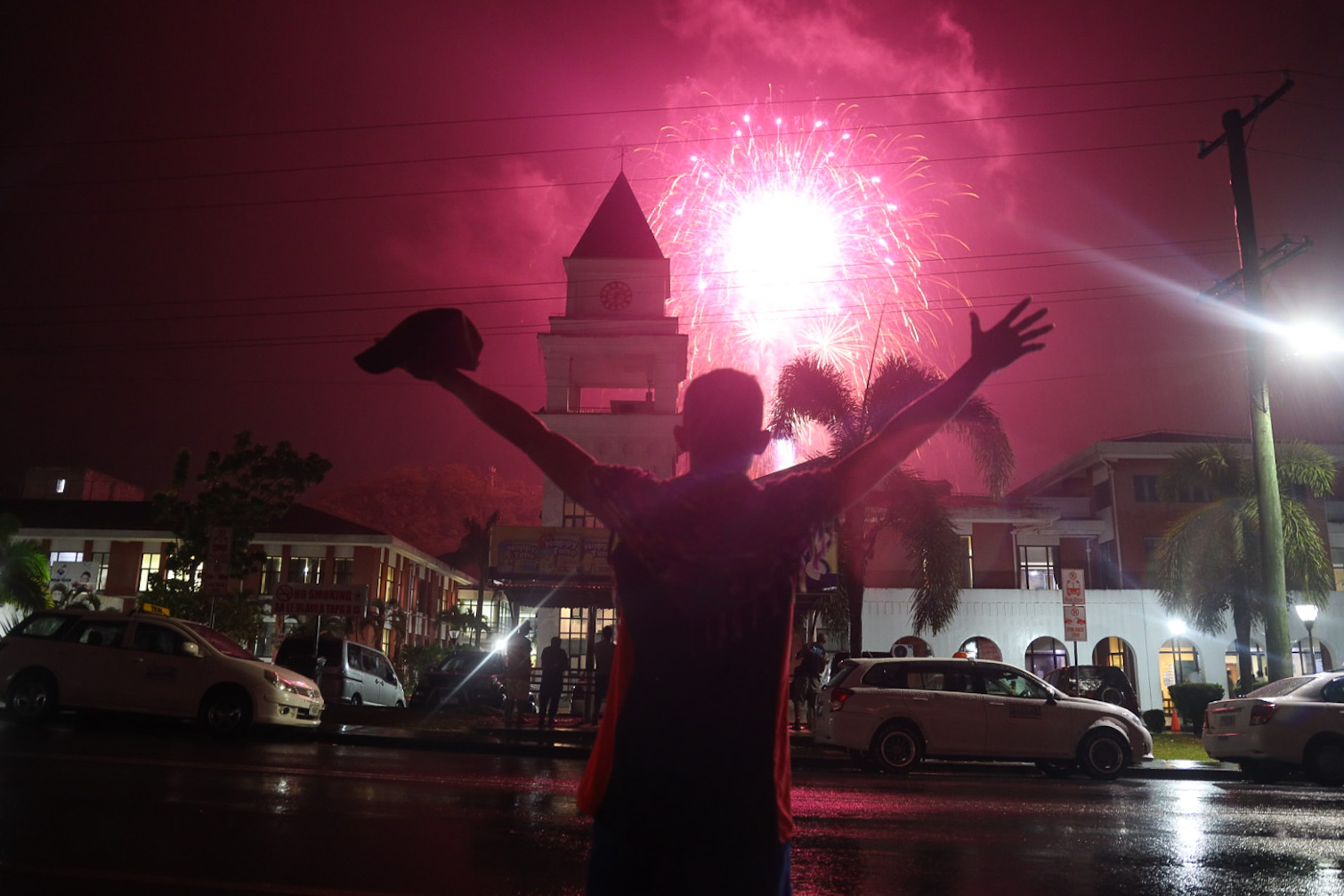 Members of the public who turned up earlier for the show were treated to entertainment in front of the Government Building, which was followed by the Prime Minister’s pre-recorded speech to welcome the new year.

The fireworks show lasted 10 minutes. Staff of the Fire and Emergency Services Authority (F.E.S.A.) and the Police were also on standby to ensure public safety.

Prime Minister Fiame, in her new year's message which was broadcast at midnight, said it was a time for reflection and hope.

“I want to wish everyone a happy new year,” she said. “This is a time for reflection and of hope with the knowledge that brighter days are ahead of us.

“Although our challenges may be numerous and tough, I know that each of us has the courage and the determination to rise up and meet them.” 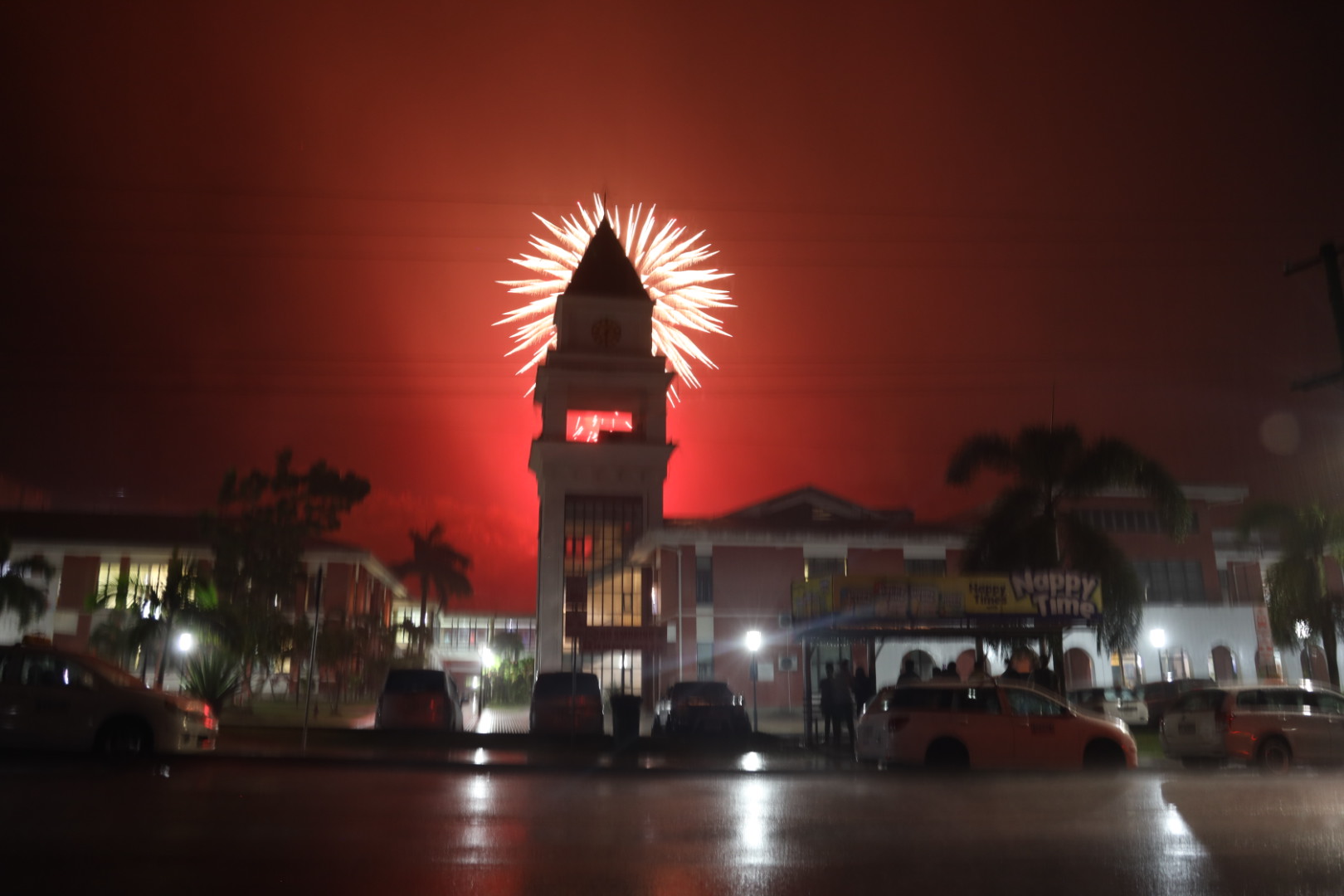 Fiame said 2021 has been a challenging year for everyone but it was necessary that the nation moved forward.

“In any crisis, it becomes all the more necessary to move forward together as a nation, and as strong, resilient people to reinforce the confidence to cooperate and collaborate towards a future we all want," she said.

“The new year is upon us. We have accepted the uncertainties that remain but we are willing to usher in a new dawn to revisit our priorities and to listen attentively to emerging demands for a better quality of life for us all.

“2022 will mark the 60th year since we became an independent State. It will also be a year for recovery, a year for inclusiveness and a year for resurgence.”

The Prime Minister said that it will be a time when we can gradually restore our daily lives, narrow disparities and recover the economy.

“The Head of State’s Christmas message calls for unity in prayer and supplication to the Lord for Samoa.

“As a nation founded on God, there shall be no other way but through our unity in prayer, to seek divine guidance in our daily walk through life and what the future holds for us.

“I wish you all a peaceful, blessed and safe New Year.”

In a recent press conference, the S.T.A. C.E.O. Fa’amatuainu Suifua said the new year celebrations will show Samoa’s thriving spirit, despite the adverse effects of the COVID-19 pandemic on the country and globally.

Fa’amatuainu said Samoa would be the first nation in the world to welcome 2022 and this is a good enough reason to have a memorable event.

F.E.S.A. Commissioner, Tanuvasa Petone Mauga said they are working to ensure the safety of the public in partnership with the relevant Government Ministries.

He said that their safety preparations are being done in consultation with the relevant villages represented through the Ministry of Women Community and Social Development.