Samoa’s demise at the Sevens Rugby World Cup has once again raised the issue about the need for the officiating of these tournaments to be looked at and scrutinised a lot more carefully.

If anything, judging from the way some of the games were handled on the first day of the tournament in San Francisco, there appears to be a group of these one-eyed referees who continue to demoralise teams, especially the ones outside the fat boys club’s usual circle.

Please don’t get us wrong here, it’s not as if the Manu Samoa Sevens went into the tournament as the hot favourites, far from it. And there still remains a lot of work and issues to be sorted out within the team.

But what we saw on Saturday (Samoan time) was a team that was hungry and who genuinely deserved a chance to get as far as possible in the tournament. Isn’t that what sport is about? Isn’t it why we love these competitions so much, due to unpredictable nature and that anything could happen?

And yet on Saturday sadly, they were up against an eight-man English team. No prizes for guessing who the eighth player was. It was woeful to watch.

For Samoan fans, the players, their families and support bases, it was heartbreaking because some of those decisions at such critical moments turned the game.

Take for instance, the first yellow card against Belgium Tuatagaloa. There was nothing wrong with the tackle. If yellow cards are issued for what Tuatagaloa did, they might as well make rugby a non-contact sport. It reminds us of Tana Umaga’s famous phrase. We’re not playing tiddlywinks here, he said, and that’s precisely what happened.

Tuatagaloa went into the ruck to clear out the player. He merely touched the English player but obviously the referee saw it very differently.

But it gets worse. While Tuatagaloa was in the bin, the referee awarded a try to England that clearly shouldn’t have been awarded. We all saw the replay. It showed that Mike Ellery’s foot had landed on the touchline well before he placed the ball on the ground. That try at such a critical moment of the game should never have been allowed and yet it was.

Why did the referee not refer the matter to the T.M.O? Why did he not bother to check especially given the close nature of the game, and with the try being scored so dangerously close to the touchline?

Wasn’t the treatment of that try stark contrast to the countless replays needed to confirm Fomai Neria’s try earlier, which we all knew from the first play was scored?

Now who is scrutinized and who is not? Why the different treatments?

We can go on and on but you get our drift. There were many instances in the game where Samoa was penalized while England got away with murder.

As for the red card against Tuatagaloa, we’re not going to argue against that. For all his wonderful work, Tuatagaloa should have known better and thought twice before attempting an intercept. It’s something he would live with. But then again, the red card was the result of that first yellow card. We can only wonder what if had the ref got the first call correct in the first place?

These bad decisions by the referees must be addressed. They are shameful and they kill the spirit of both the players, coaches who work so hard to ensure the teams are ready, and for all of us who love this sport.

Here’s the thing. We know our Manu Samoa Sevens has been through a rough patch. A lot has been said about Coach Sir Gordon Tietjens and how this team has performed in the recent past.

When Tietjens came on board, he indicated quite early on that this was one of the tournaments he wanted to target. The post mortem of the team’s performance has yet to be done.

But on Saturday, for one of the few times this season, we saw the true potential of the Manu Samoa Sevens. We saw glimpses of heart, the team and individual brilliances we hadn’t seen before. It was a sign that maybe; just maybe what Tietjens is doing is working. It must be said that one gets the feeling we are not far away from seeing this team click, if the players are maintained.

As for the World Cup, alas it wasn’t to be.

It’s a pity their cause was not helped by a one-sided referee whom we believe should be held accountable for his bad decisions. Referees shouldn’t be above reproach and certainly should be made to feel the anguish their poor decisions bring. They should face the music, just like the players and coaches do when they don’t perform.

But then how many times have we seen this over the years? Today, you really have to wonder if our teams will ever be given a fair go? Or do our athletes automatically have a target on their backs just because? Tell us what you think. 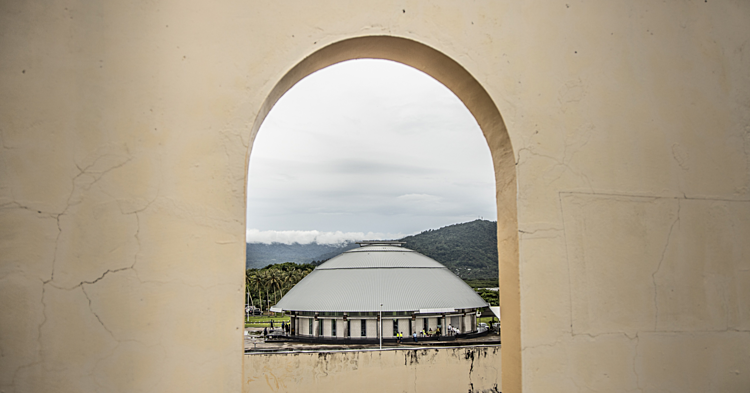