Gagaifomauga No.3. rallies behind C.J., Fiame

Baking heat did not discourage hundreds of people from the Gagaifomauga No.3. constituency from rallying in support of Samoa's judiciary and Prime Minister-elect at a demonstration on Wednesday afternoon. 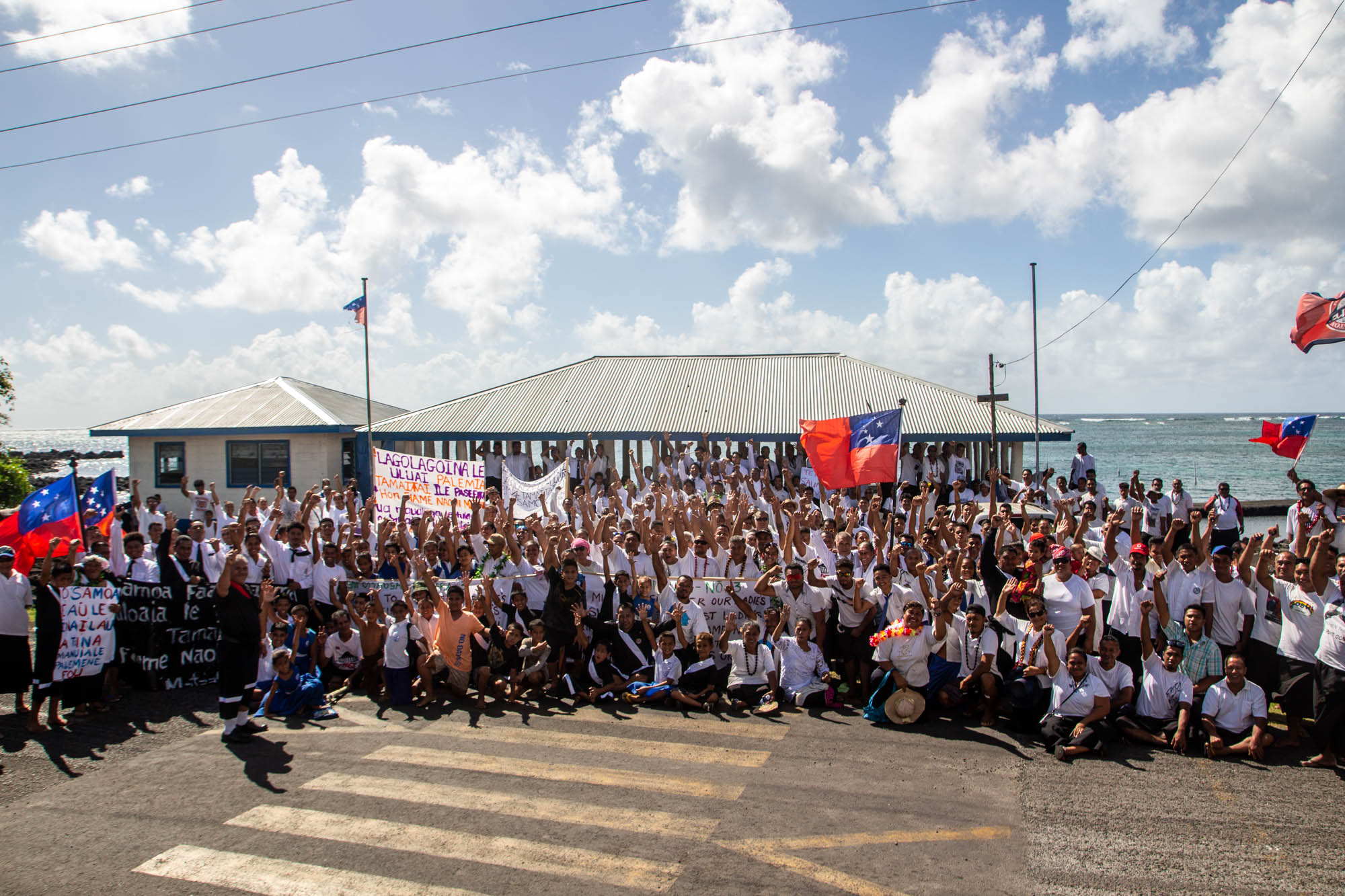 The demonstration was held to complement a march in Upolu with the same stated aims.

Because they could not make the trip over, Gagaifomauga No. 3 constituents organised their own show of support.

Supporters of all ages participated in the demonstration. 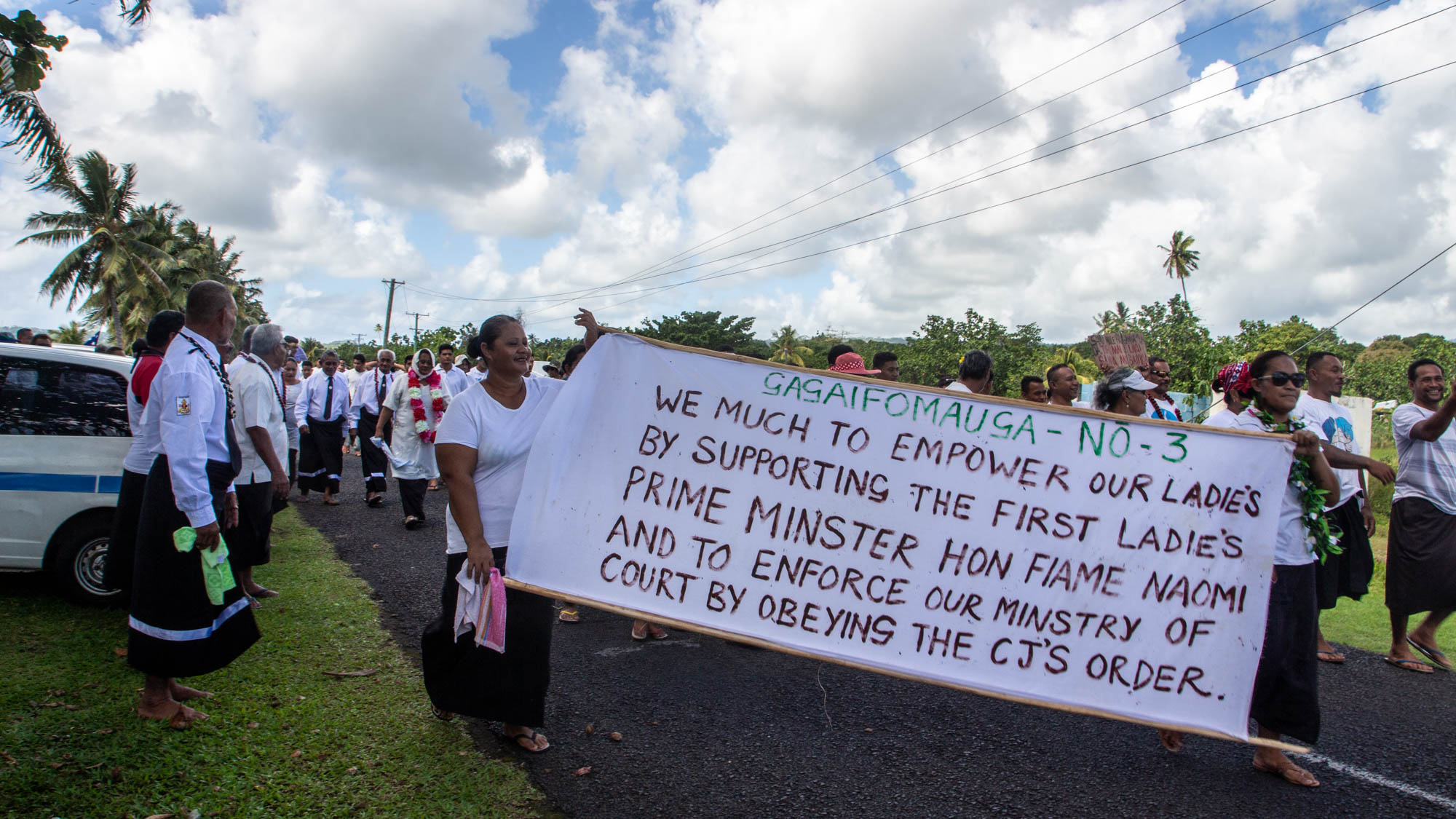 Demonstrators were clad in white and black with posters and banners to showcase their support for Samoa's judiciary.

Earlier this month, the party of the caretaker Government, the Human Rights Protection Party (H.R.P.P.) lodged a complaint with the Judicial Service Commission in which they questioned the competency of the Chief Justice, His Honor Satiu Simativa Perese.

The complaint, which also criticised senior judges more broadly, was signed and submitted to the Judicial Service Commission by Member of Parliament-elect Lealailepule Rimoni Aiafi who is the Human Rights Protection Party's (H.R.P.P.) Secretary. 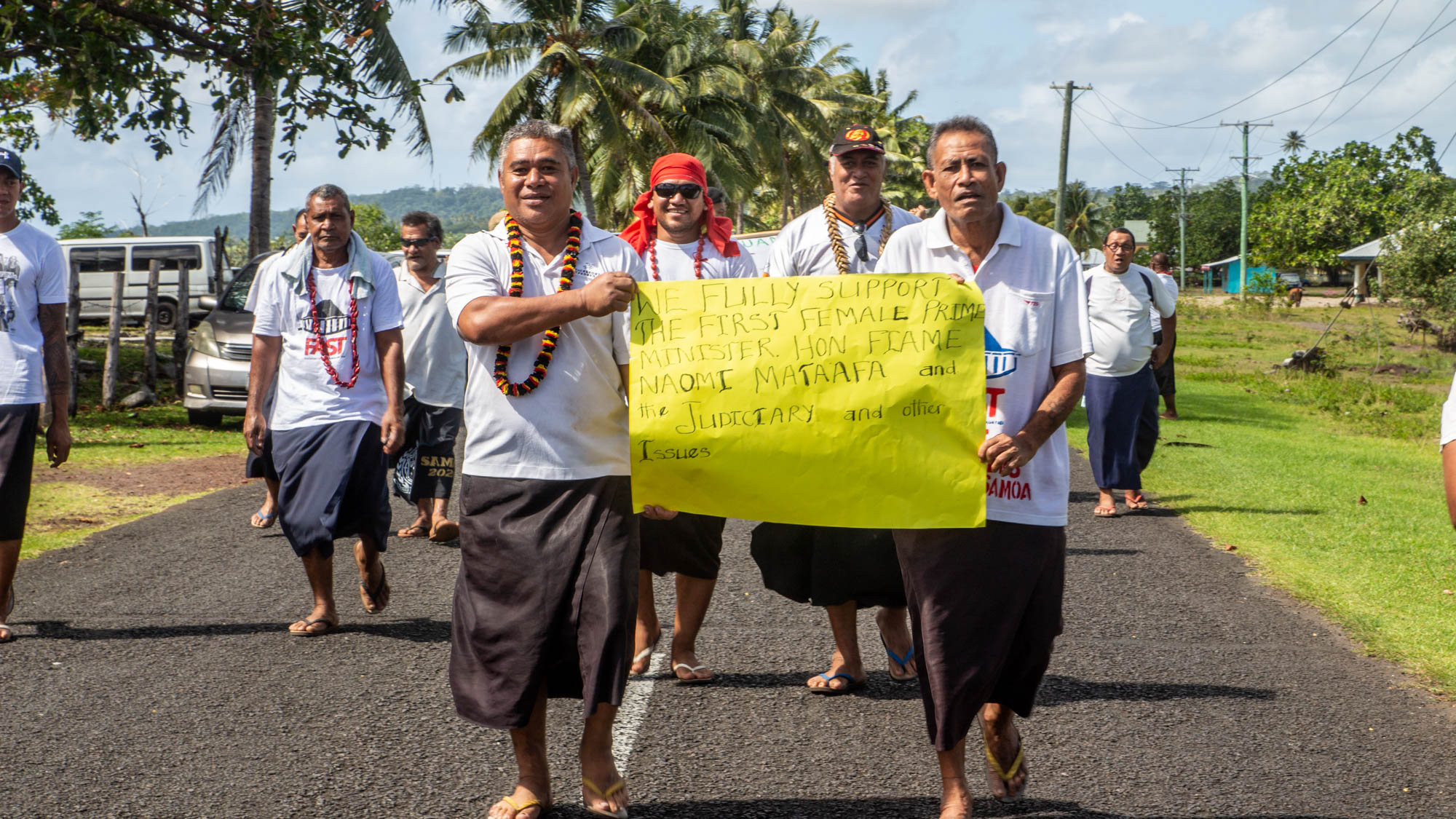 Since then, several constituencies from the big island of Savai'i have voiced their concerns against the extraordinary move by the H.R.P.P. against Justice Satiu and urging the caretaker P.M. and caretaker govt. to concede defeat after the results of the 9 April election and make way for a new Government. 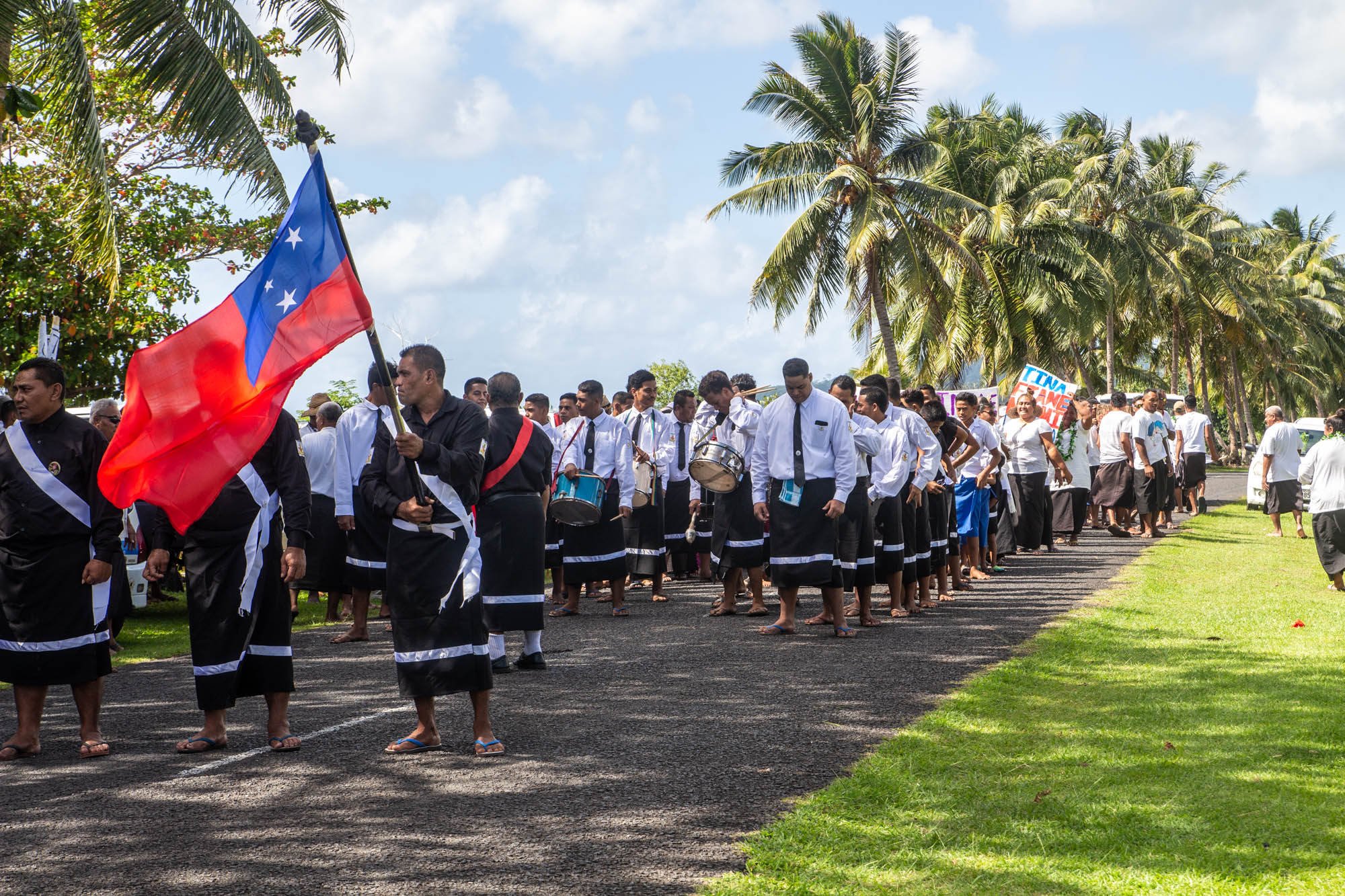 Gagaifomauga No. 3's march started from the village of Fagae'e where it was led by the Fagae'e Boys brigade.

All members assembled in front of the Sasina's Committee House to direct an announcement towards caretaker Prime Minister, Tuilaepa Dr. Sa'ilele Malielegaoi. 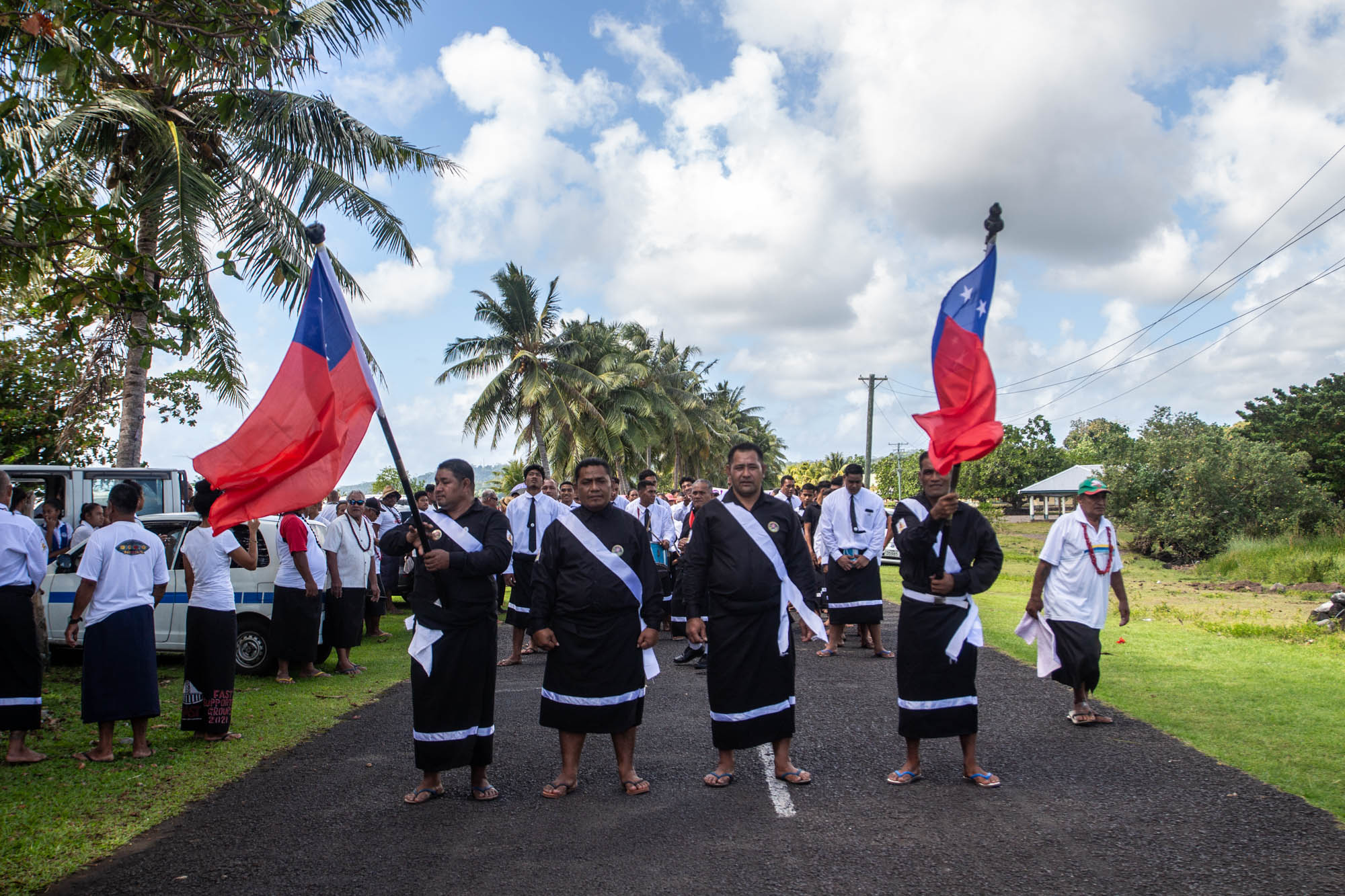 Leauna'i made an impassioned appeal to Tuilaepa, to "step down" saying the voters of the country has already spoken and chosem Fiame Naomi Mata'afa to be Samoa's leader and the nation's first female Prime Minister.

Leauna'i commended and praised Tuilaepa and his Government for their history of empowering women in Samoa.

But he said that Tuilaepa should no longer delay convening Parliament and must "give Fiame the opportunity to lead."

"We strongly support the chosen leader, Fiame," he said.

"We are gathered here today to relay our support and deliver a very important message.

"Because we could not join the others in Apia, we have decided to have our own parade here."

The high chief further urged the H.R.P.P. to withdraw a complaint lodged against the Chief Justice and to instead "honor and respect the decisions from the courts."