A list of seasonal workers will now have to go through Cabinet, caretaker P.M. says (Photo: Vaitogi A. Matafeo)
HRPP
Politics

Lists of approved seasonal workers now need to be reviewed by the Cabinet before their departure from the country, the caretaker Prime Minister, Tuilaepa Sailele Malielegaoi has confirmed.

The new section of the seasonal workers application review process was revealed by Tuilaepa during his weekly programme with TV3, saying the most recent batch of seasonal workers to fly out on Friday was approved by the Cabinet after a review.

The Recognised Seasonal Employment [R.S.E.] scheme is managed by the Ministry of Commerce Industry and Labour.

He said the Cabinet recently approved a total of 250 seasonal workers, all of whom are completely new individuals to the scheme, who are bound for Australia to work in the meat processing industry and berry picking.

“We checked and they are all new people,” he said. “Two hundred and fifty of them going to Australia, the men will be working in the meat processing industry (fasi manu) for three years, whilst 50 women will be working for berry picking for nine months, all new also.

“The new process is now in effect for the list of seasonal workers to be put through Cabinet for approval and so only the new workers will be on that flight.”

The new move to review a list of seasonal workers followed a special Cabinet meeting that was prompted by the seasonal workers registration incident at the Congregational Christian Church of Samoa hall at Sogi last month.

Tuilaepa said it was during that meeting that they asked the Ministry to bring in a list of those who want to go overseas so the Cabinet can assess and see who would be eligible. 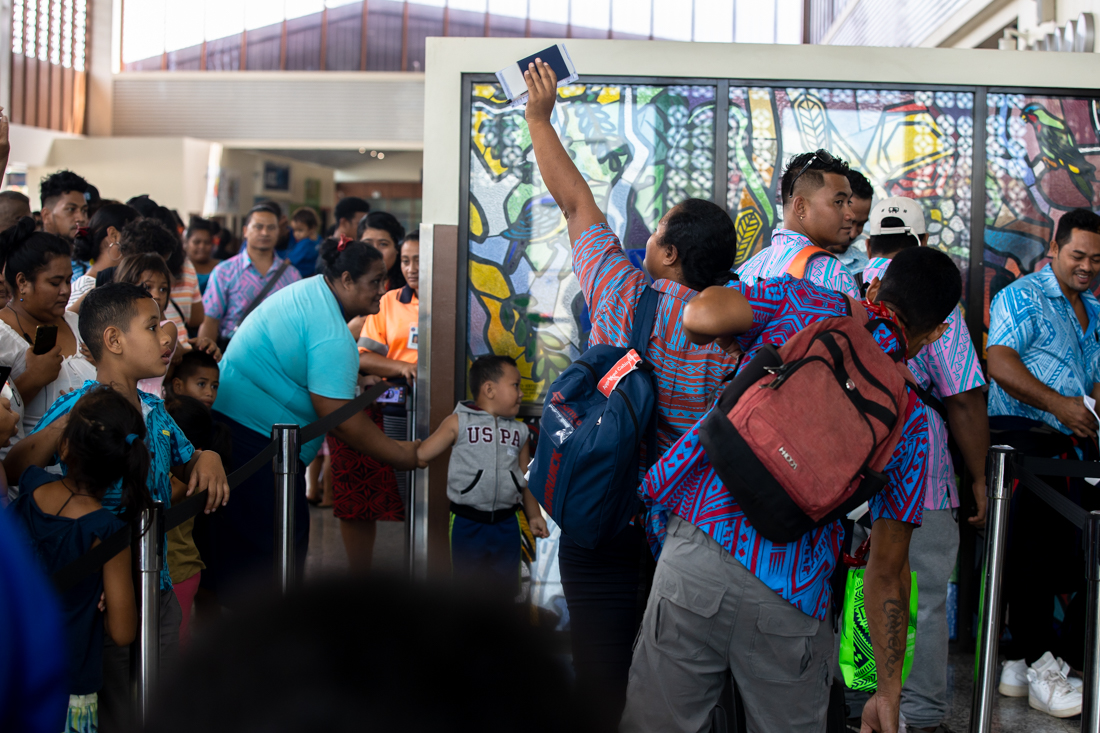 “For example, we understand that some of those who want to be a part of R.S.E. work scheme already have jobs here in Samoa, so they should not be given the opportunity to go overseas,” he said.

“From now on, we will focus only on those who are unemployed as they really need this opportunity.

"We also found out that there couples who have traveled overseas under the R.S.E. scheme leaving their ten children behind. So we will also assess that and make sure that that is not going to happen again."

The opposition, Fa’atuatua I le Atua Samoa ua Tasi (F.A.S.T.) party have been critical of the scheme saying that while international opportunities are welcome but should not be an economic priority.

Deputy leader, La’auli Leuatea Schmidt, said the Government's goal should be not to rely on such temporary measures for the betterment of families.

“These seasonal opportunities should not be our priority. Our priority should focus on long term plans,” he said during a programme on the EFKS TV2 called Ia Ao Samoa.

“We don’t prioritise those opportunities, because it is not guaranteed every day. There will be a time when Australia might tell us, that’s enough.

“We are not the only country in the scheme, there is Tonga, Vanuatu, Fiji; and then where will our people go?

“So the fact is, we use the opportunity, but still work out a long term plan to ensure we capture our manpower locally to develop families.”

Laauli reminded everyone of the $1 million a year pledge for each of the 51 constituencies, to ensure development of villages.

“What are these developments? Agriculture, fisheries, any development project that will benefit the nation,” he said.

“That’s where our priorities are at; opportunities and money for our families. And who is expected to do that work? Most of them were at the registration looking for temporary employment.”

The same flight last Friday from Australia arrived with the 10,000 doses of the AstraZeneca vaccine from the Australian government and returned with the 250 new seasonal workers.

In the same programme, Tuilaepa also revealed that the arrival of the Samoa Airways aircraft has been delayed again.

The aircraft was scheduled to arrive on July 13 as revealed by the caretaker Minister of the national airline, Lautafi Fio Purcell.

But Tuilaepa said the aircraft needs to undergo further preparations before coming  to Samoa in another "20 days" as of Wednesday.