Awards ceremony hosted by the Samoa Cancer Society in acknowledging of their Volunteers Cancer Championships on Tuesday. (Photo: Video. Lupe.Mailo)

Sixty volunteers with the Samoa Cancer Society have undergone training on cancer awareness and advocacy and were recognised in a ceremony on Tuesday.

The volunteers which comprise 46 from Savai’i and 14 from Upolu were recognised at the completion of the training, which would now enable them to raise awareness in the community on cancer treatment and cures.

The training of the volunteers is the culmination of one of the key objectives of a project initiated by S.C.S. in 2019 to encourage as many people as possible to talk about cancer and promote key health messages.

The S.C.S. Fundraising and Marketing Manager Seiuli Verona Parker said the purpose of the training was for the volunteers to deliver messages to the community, especially on the services that the society currently provides. 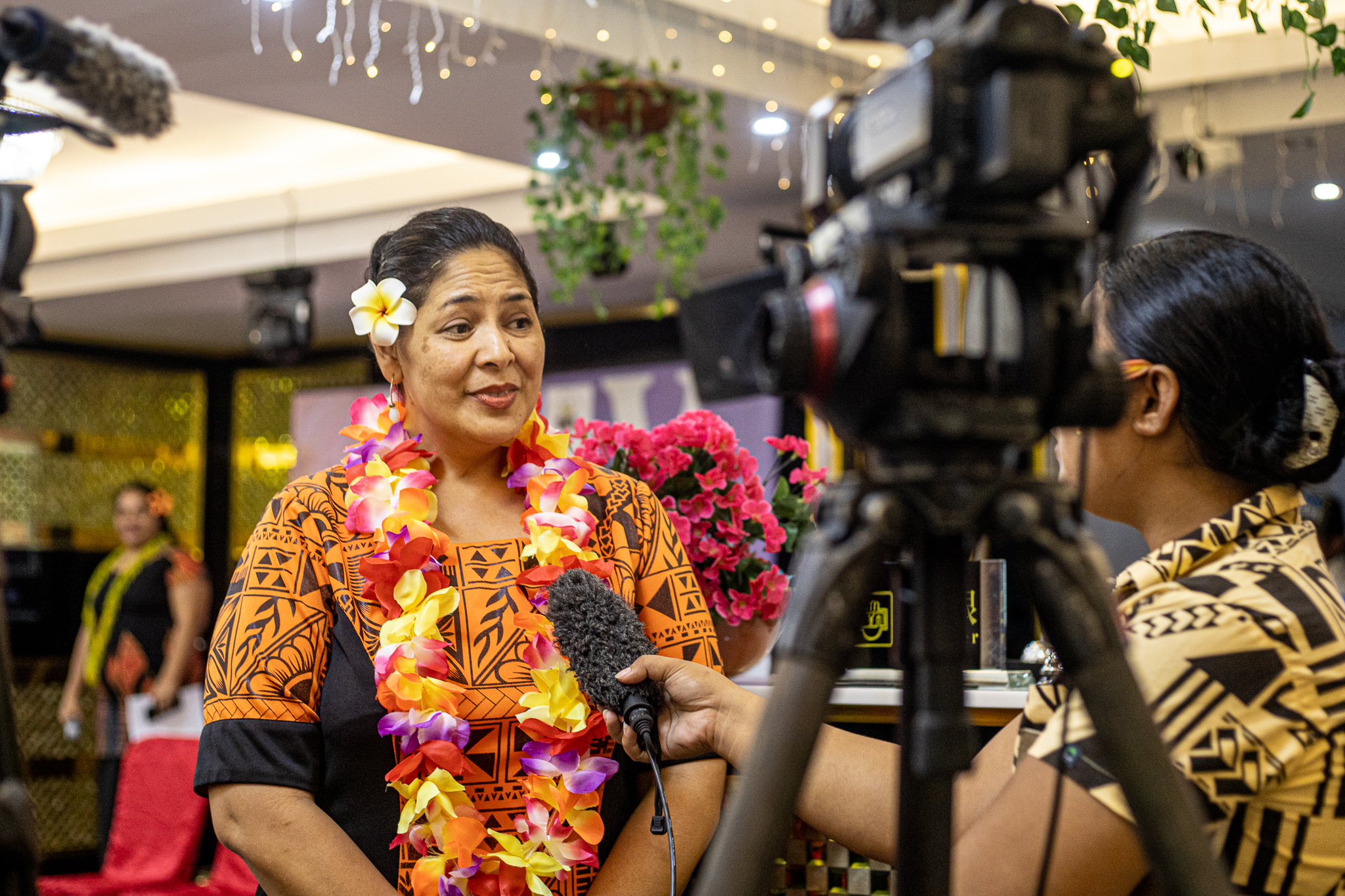 "We are very grateful for each and everyone who took part in this training, especially the response we have received from the village council, this is one of the hardest parts of asking for confirmation,” said Seiuli.

“But the response from both Upolu and Savai’i so this morning we want to acknowledge them all, this project was divided into three categories.”

The first category is messages that would enable the community to know the symptoms of cancer, while the second category is to deliver messages advising the community of the responsibilities of the society in terms of handing cancer cases to avoid leaving the cases too late, and the third and final category is on the dangers of lung cancer and how it is caused by smoking.

According to Seiuli, among the 60 volunteers who attended the training were youth members, which reflected their desire to assist the society in its work.

"So for the training we have been working on we have mainly seen the young generation joining the program, so the volunteering of Cancer Championship outcome shows that there's lots of people who have joined and the good results have set an example for others who have been wanting to join.

“So on behalf of the C.E.O. and the management of the Samoa Cancer Society we would like to say thank you for your contributions and having the courage to join, as we all know the Society doesn't have enough funds to pay for activities like this.

“But today's session of being a volunteer of Cancer Championship, we are very delighted for the efforts you have given for the society.”

The S.C.S. Community Education and Media Officer, Tiana Silipa, then reflected on the training experience and emphasised how as volunteers they will be cherished as the ones with information reaching out to the public.

"The numbers of people who have cancer every year has been increasing and the initiatives for the society of having the training is to inform the community through the support of village members from around the country in assisting the society and helping out, especially the assistance from C.S.S.P in 2019,” she said. 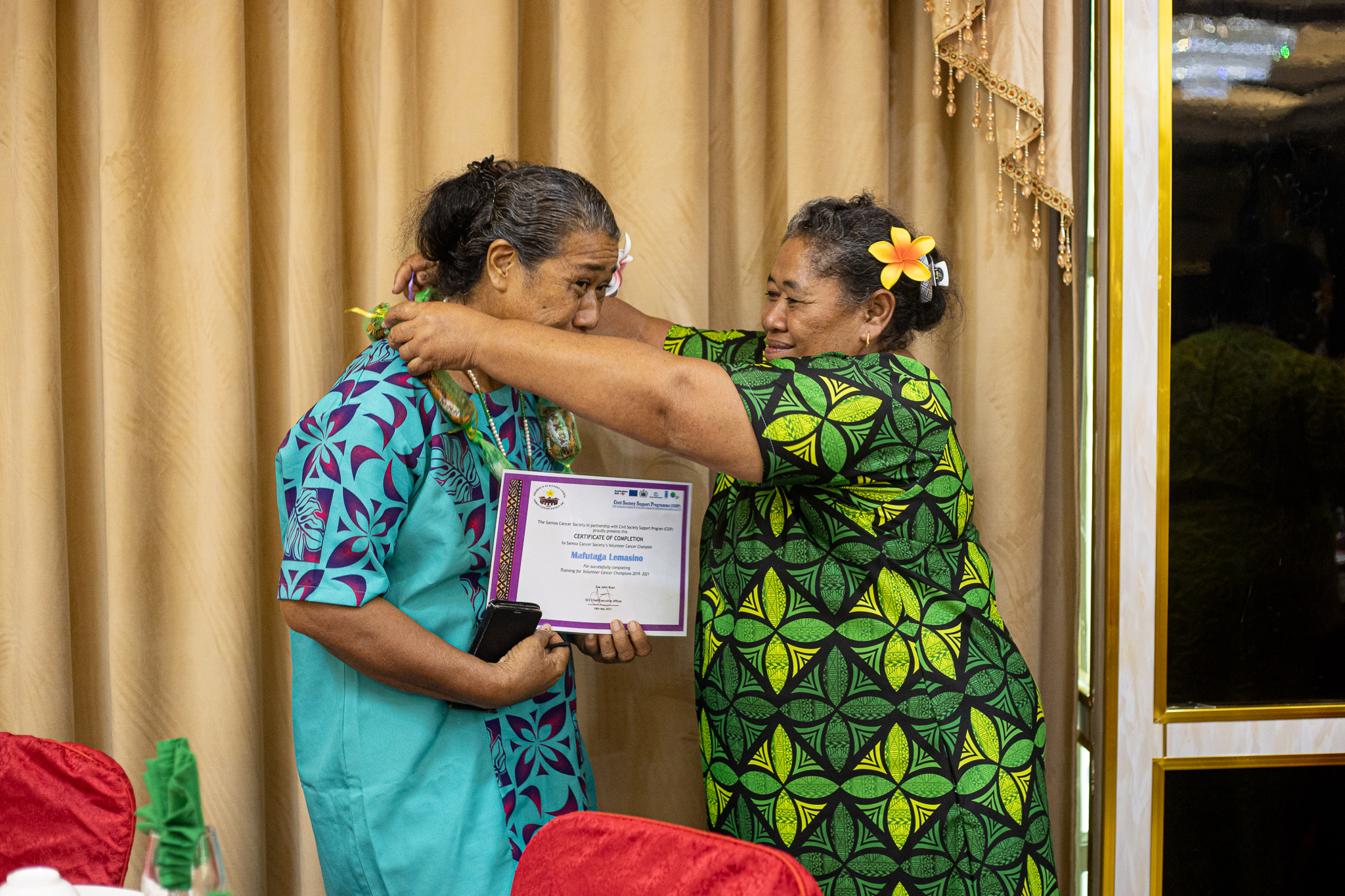 “This is the third project that has been funded by the C.S.S.P for which we are grateful for the continuous support throughout the years, this training called Training Volunteer Cancer Championship.

“This was not an easy task to do but we have tried our best to overcome this by the society having informed the public, in informing them whenever they have symptoms of having cancer, so throughout this training we have received good feedback from the volunteers.”

Ms Silipa also added that the expectations for the volunteers to spread the message to everyone to step up and work together with the society to reduce the numbers of those infected by cancer.

One of the recognised volunteers, 32-year-old Tarah Ah-Loe of Vaisigano and Sagafili, Mulifanua said the training has taught him good lessons in helping other people.

"This training has taught me a lot about being a volunteer for Cancer Society, we know the effect of cancer in our country, for that joining in this training enables me to help other people who desperately need help,” he said.

“Our job is very important in informing the public with true information so I acknowledge the support of the society and also the Cancer Society as well.

The S.C.S. management Samoa Cancer Society acknowledged the support of its partners such as the Civil Society Support Program (C.S.S.P), which donated $200,000 in funding for their project as well as to continue with its previous projects and the ones ahead in consultation with the Ministry of Women and Social Development.

The award ceremony for the 60 volunteers was held at Princessa Restaurant at Motootua where both the parents and families of the awarded volunteers attended.

The project has been awarded over a 12 month period and is expected to be completed on 30 June 2021.