A Police investigation into the crash is continuing. (Photo: Vaitogi A. Matafeo)

A single-car crash at Luatuanuu on Tuesday afternoon was apparently caused by speeding and has left two people in Motootua Hospital with serious injuries.

The crash involved a Toyota Dyna cab truck, the apparent property of the Samoa Red Cross Society; the organisation’s logo was on the door of the truck.

The incident took place adjacent to the bridge between Leusoalii and Luatuanuu.

"[There was a] confirmed traffic accident at Luatuanuu yesterday at around 4 pm," she said.

"The matter was reported to Traffic [Police] at Fagalii and confirmed that the driver and three other passengers of [the] Dyna [...] were admitted to Motootua for medical treatment.

“Two were later discharged and two remain due to their injuries.

“Preliminary investigation indicates speeding as a result of the traffic incident and no other vehicle was involved.”

Police investigations into the matter are continuing. 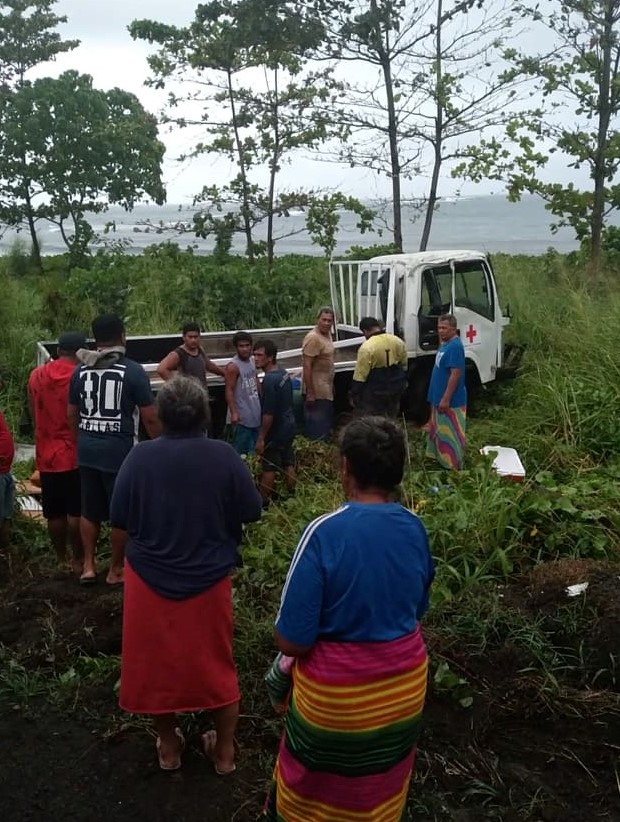 The Samoa Observer was not able to identify the four people riding in the truck involved in the incident.

But a video taken by bystanders and viewed by the Samoa Observer showed the car's four occupants being helped out of the car shortly before Police were called to the scene of the accident.

The Secretary-General for Samoa Red Cross Society, Namulauulu Tautala Mauala, was contacted about the incident and said that their injured employees were slowly recovering from the incident.

"There are kids who are currently [...] at the hospital, two were injured," she said.

"They are both on their way to recovery."

The nature of the car occupants' injuries has not been made known and no update on their medical conditions has been released.