One hundred years of living life on earth is a feat most can only dream of. But Yvonne Llewellyn Mackenzie lived to 100 and surpassed that milestone to reach 102 before she passed on.

Nieces fondly remember their aunt as loving; for her cheeky laugh, an unwavering love for the late Prince Philip and the simple things in life, like having a smoke in front of the Mackenzie shop in Lotopa and eating ice cream.

Ms. Mackenzie passed away peacefully in her sleep on the morning of last Saturday, 10 April at her Lotopa home, her niece Deenee Mackenzie, 39, told the Samoa Observer.

It was the morning after Election Day and nine days after she made it to 102. But nieces Ms. Deenee and Julie Slaven, 45, say their aunt would like it very much if the world remembered that she left the earth a short while after Prince Philip, “the love of her life” did.

(The Prince, late husband of Queen Elizabeth II, passed away on Friday, 9 April, 2021 at the age of 99. Funeral services have been set for the weekend.)

“She just turned 102 in April, on the first. I’m in Indiana so it was our Friday and Saturday in Samoa. She passed away on the same day as Prince Philip the love of her life she claims, on the same day probably the same time.

"We heard the news first of Prince Philip that he passed away and then my mom called my father and told him about it because we basically know a lot about Prince Philip because of Aunty Vonne.

"He was the love of her life. Mom told Dad don’t tell the old lady that Prince Philip passes away or else she might be heartbroken,” said Ms. Slaven from Fort Wayne, Indiana, U.S.A.

“And then shortly after that conversation, my Dad went to check on her to make sure she had her breakfast and she had passed away. We were in shock and she died peacefully in her sleep. She beat us to it.

"The original plan is that we were not going to mention it to her because she would always say ‘Prince Philip is my boyfriend’ and she would laugh and tell her stories about Prince Philip. That was a very sad day for all of us. But she wasn’t sick…she was okay…she was fine, still strong, still smoking, still had her appetite. She was good. She was coherent, just doing her thing talking stories and making jokes.

"We were in shock. She went with Prince Philip so a least she didn’t go alone, she went with the love of her life.”

She said her aunt was “an amazing old lady.”

Niece Leatalynn Mackenzie eulogised her aunt as the “sweetest person in the family” – petite indeed but fearless, witty, funny, mischievous and sometimes stubborn.

She enjoyed laughs with the family, hanging out with her many cats, her smokes (always her smokes), eating McDonald’s meals and ice cream.

“Aunty Yvonne was the sweetest person I know in my family and touched all those she met with her easy loving smile and welcoming soft-spoken ways," said Ms. Leatalynn.

"God had granted Aunty Yvonne a full life of never-ending smiles, her loving ways and cheeky laugh whether over a family meal, in front of the shop greeting people while asking for a cigarette, or just cruising at the back with her house full of cats munching on McDonald’s and eating ice cream. 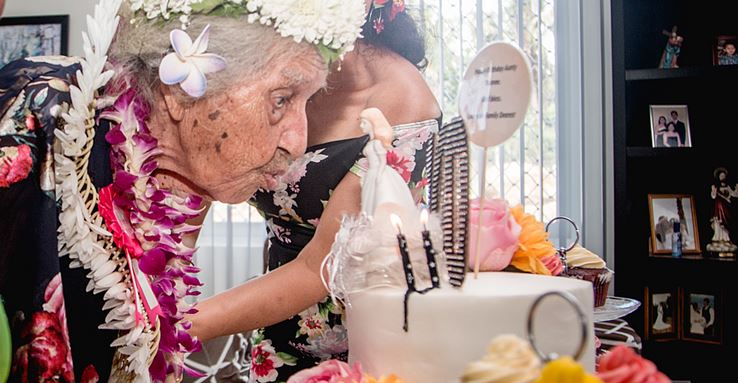 “But Aunty wasn’t all sunshine and flowers. She also had a witty, at times [a] dark sense of humor when certain people upset her. Yes she had a stubborn temper, when push came to shove.

"She claimed that she was related to Saddam Hussein, the notorious Iraqi criminal that nobody wanted to be related to. You should’ve have seen some of our customer’s faces when she contently spread this rumor.”

Ms. Yvonne Llewellyn was born on 1 April, 1919 in Faga, Savai’i, the daughter of the late Tulia Catherine Isaia Fiaailetoa Fatialofa and Samuel Vernon McKenzie, a well-known businessman in Samoa.

Ms. Yvonne Llewellyn is survived by her children Alimara and Henry Oldehaver, Peter and Sonja Rosewarne and Lina Key, grandchildren and nieces and nephews.

A retired nurse, she attended school in Auckland, New Zealand.

“Thank you Lord is what I have to say. I am blessed to reach the age of 100,” Ms. Yvonne Llewellyn laughingly told the Observer at her 100th birthday celebration in 2019.

Her son Mr. Rosewarne said that her secret to longevity was “just walking and eating Samoan food.”

Ms. Yvonne Llewellyn professed often that she was from Africa and China and used a make-believe language.

Ms. Leatalynn said it drove her grandfather crazy and he tried to scare her aunt with “the ultimatum of taking her to Mapuifagalele.”

“Grandpa would never send her there though because she refused to go and probably catch a taxi back to the shop if she was sent there for mischievously misbehaving on purpose…so for the time being, Aunty Yvonne would keep the peace and behave only for that day," said Ms. Yvonne Llewellyn’s niece.

The following morning, she continued with the chanting of her…“so-called Chinese language.” And grandpa again would warn her.

“This was a daily routine and was well expected when I got up in the mornings, to Aunty’s chanting and Grandpa’s disgruntled remarks.

"But Aunty Yvonne knew her rights. She even went as far as getting into a police car one time, parked in front of the shop and demanded to take her to the police station to press charges that she refused to go to Mapuifagalele and nobody was going to make her go. That was our Aunty. Petite as she was, she was also fearless.”

“Somehow she managed to impart her values and standards to me in a subtle way, maybe not the smoking of two packs a day part, but while she may not have realized it, she was a true role model for me with her easy personality and ‘don’t worry be happy’ life-style, unless of course you were a thorn [in] her side.

"I hope to be able to continue to grow and exhibit the lesson she taught me, as I continue on my own journey in life. Aunty Yvonne, I will miss your guidance and your laughter. I will hold you in my heart forever. Rest in Peace Aunty.”

A memorial mass for Ms. Yvonne Llewellyn Mackenzie was held on Wednesday, 14 April, 2021 at Sefo's Funeral Parlor Chapel in Motootua.

The mass was lead by Father Mikaele Tuvini, assisted by Deacon Etilasi Eti with music provided by the Lepea Catholic Church.

The prayers of the faithful was led by nephew Pepe Fiaailetoa Christian Fruean with a special announcement from nephew Roderick Mackenzie.

Following the service, Ms. Yvonne Llewellyn was interred at the Maagiagi Cemetery.

She liked simplicity especially when it came to her footwear and preferred the simple blue and white slippers.

“Everytime I would go to America, I would always buy her all types of shoes but Aunty Vonne would always choose her slippers (seevae kosokoso). Til the day she died. It was white and blue, always that colour too!,” said Ms. Deenee.

Her aunty had a family home in Moamoa but she chose to live with family members year after year.

“My cousin Jamie and his wife Donna and my cousin Pepe Fruean and his wife Moana, and some of our other family members, we all took turns taking care of aunty but she always ended up here…we stay in the back of the store," said Ms. Deenee.

"Aunty, she was a character. She kept us on our toes. I was very close with her because we lived together. Everything we did, my sister is the one who would take us for rides and stuff, everything she did and asked for, we always tried to do it. She was very stubborn. She didn’t like going to hospitals.

"Back in 2008 she got very sick when she was staying with our family in Vaimoso…she had never been in the hospital before that. She had no hospital record.

“It’s even in the eulogies – she smoked until the day she passed…she had perfect eyesight…my aunty never ate vegetables…she didn’t drink water and lived off coke and coffee.

"She hated soup because it had vegetables in in and ate fried food like chicken and chips, fish and chips, sausage and chips. She was like survival of the fittest.

"We really loved her, not as our aunty but we looked at her as a grandmother. It’s very hard. But she is in a better place now. She was a trip, she was down-to-earth, she was very chill. She was truly the best.”