The University of the South Pacific (U.S.P.) Students Association has written a scathing open letter to the university leadership and council over what it calls “interferences into management and delay tactics” over their ousted Vice Chancellor.

Early this year, Vice Chancellor Professor Pal Ahluwalia was deported from Fiji at midnight, allegedly over breaching the terms of his visa. His wife, a lecturer at the university, was deported along with him and they now reside in Nauru.

In their letter the students say the Pro Chancellor Winston Thompson, a known agitator against the deported Vice Chancellor, has been using his position as the chair of the university council to obstruct the university management.

They also accuse him of delaying the production of the Special Council meeting minutes and circulating those minutes to the council. The Special Council was established to deal with Professor Ahluwalia’s deportation and his current employment status.

“Although this has been a consistent theme since VCP Ahluwalia highlight corruption in the University, it has continued unabated since his deportation,” the student association writes.

“The Students, as the key stakeholder have written to Council several times without their voice being given adequate consideration. We implore the council to take our pleas seriously!”

Before, and likely leading to, his deportation, Professor Ahluwalia investigated and exposed rife misspending by senior university staff, including divvying out unnecessary salary bonuses and staff benefits costing the University millions.

Among the staff named and shamed in his report, which was later independently corroborated by New Zealand based auditors BBDO, was the Pro Chancellor Winston Thompson, who has been campaigning for Professor Ahluwalia’s sacking.

The student council says they have read a report by the Acting Vice Chancellor and President Dr Guilio Masasso Paunga that was submitted to the council on Friday 09 April and was allegedly confidential.

The report itself outlines “serious and alarming issues,” they say, that highlight how Mr. Thompson has been using his Council Chair position to pursue a “personal vendetta” against Professor Ahluwalia.

“He has been deported but that does not seem to be enough for [Mr. Thompson].

“At such a pressing and trying time for the University, where its Chief Academic and Administrative Officer (Vice Chancellor and President) was detained and deported in the middle of the night from USP Laucala Campus on 3rd Feb 2021, the continuing trend of interferences and behaviours displayed by [MR. Thompson] are utterly disgraceful!,” the letter continues.

The students call on Mr. Thompson to resign, having “broken the spirit of regionalism,” and plead with the Council to remove him if he does not.

They ask the member countries, including Samoa, and their representatives on the council to urgently meet and review ACTING VCP’s recommendations, remove Mr. Thompson quickly, and to resolve Professor Ahluwalia’s situation fully.

“We have lost confidence in the PC and view the position of the Pro-Chancellor as being highly politically motivated.

The letter is addressed to the U.S.P. council members, student council members and community, and the Prime Ministers of New Zealand and Australia, and signed by the Interim Chair of the Student Council Lepani Naqarase and Deputy Chair Viliame Naulivou.

Samoa is currently represented on the Council by caretaker Minister of Education, Sports and Culture Loau Keneti Sio and chief executive officer of the Ministry of Finance, Leasiosiofaasisina Oscar Maleleagoi. 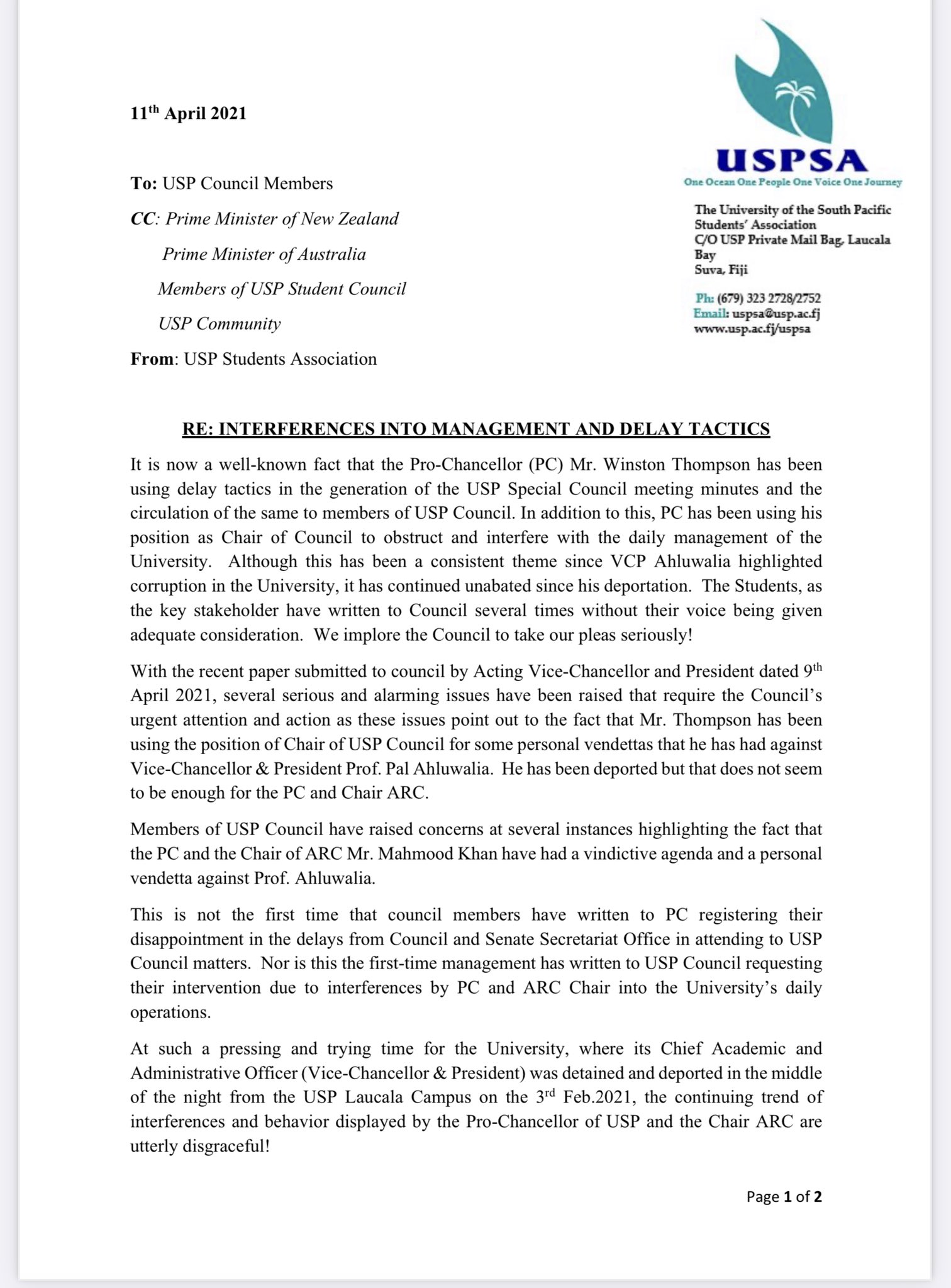 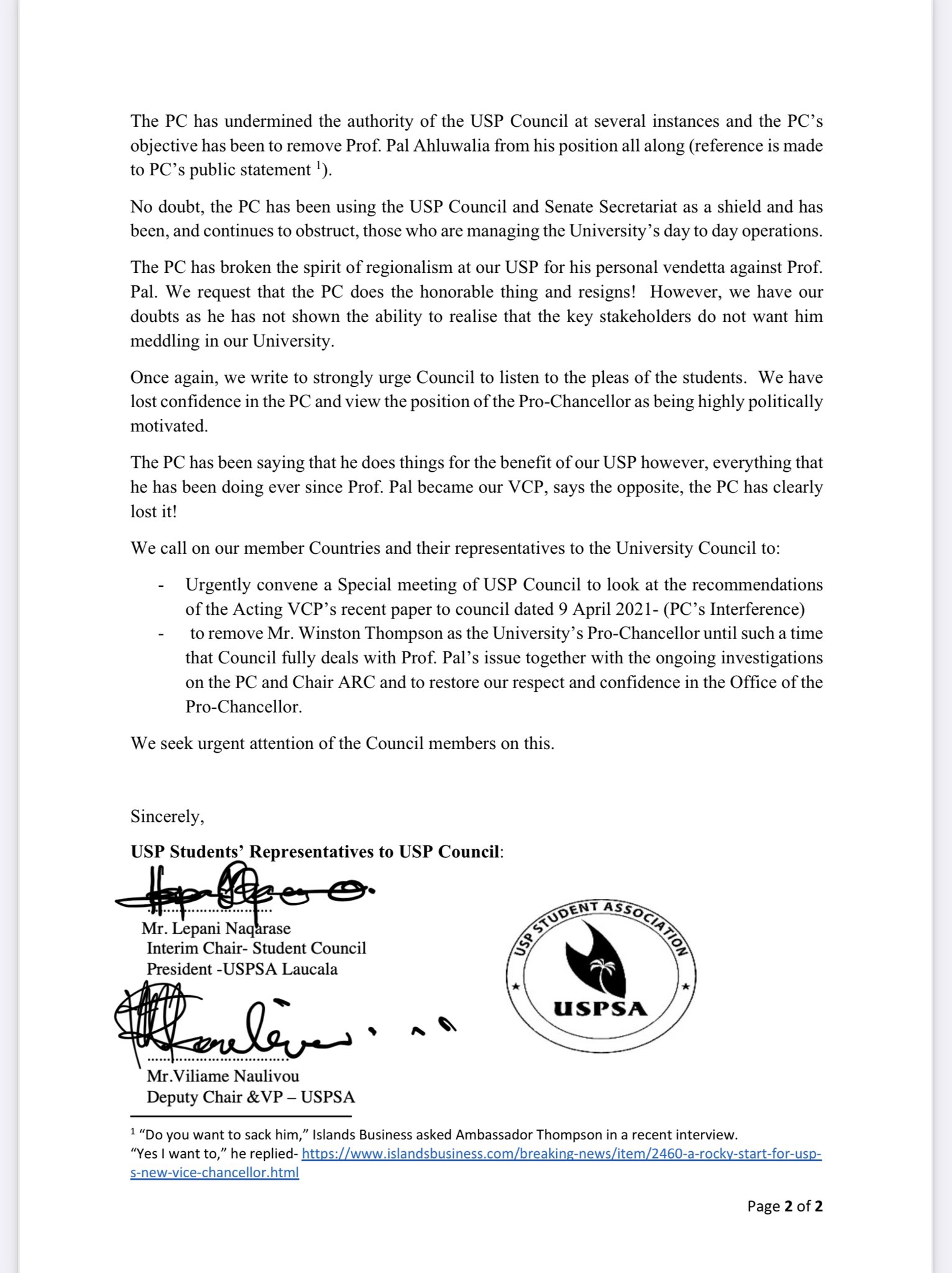