A nail-biting race for the seat of Palauli No.2 has become a contest dominated by Fa’atuatua i le Atua Samoa ua Tasi (F.A.S.T.) candidates, leaving behind a former Minister, Faumuina Tiatia Liuga.

Preliminary figures released on Friday show the seat is a battle between F.A.S.T. candidates, who are separated by a hair's breadth.

Unofficial results have the opposition party candidate, Tiatia Laulu Mapusua, on top but only by two votes.

Tiatia slid into first place by only two votes, ahead of another F.A.S.T. candidate and former head of the National Health Services, Leota Laki Lamositele.

But preliminary results on Friday show Faumuina at the back of the election field.

O.E.C. figures have Tiatia leading with 735 votes, followed closely by Leota with 733 and Faumuina with 269.

It is the first time the veteran politician and Human Rights Protection Party (H.R.P.P.) stalwart Faumuina has lost an election battle since entering Parliament twenty years ago.

The two F.A.S.T. candidates have been ahead since the start of election week and were separated by only two votes at the end of the final polling day. 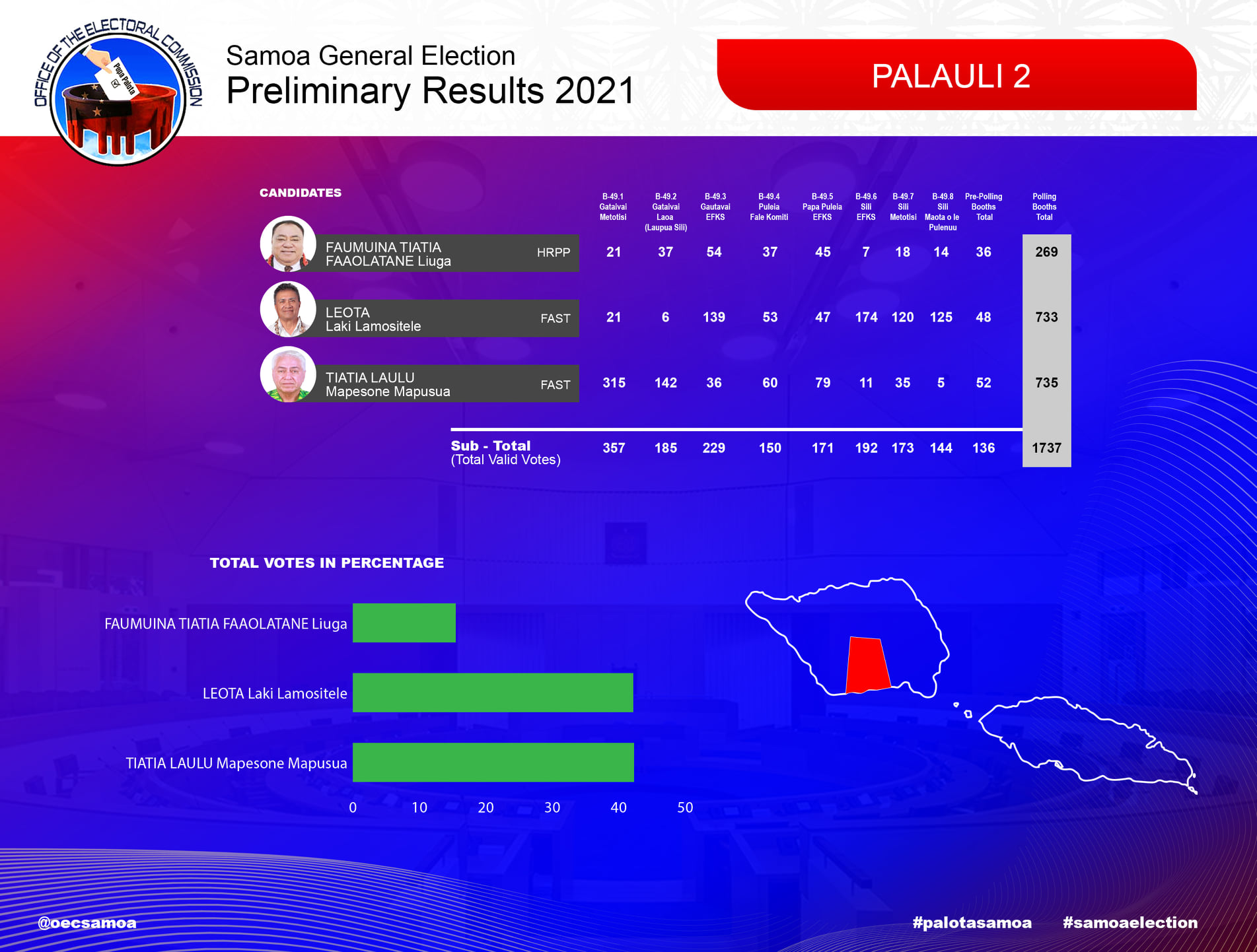 Eight polling booths were spread across the constituency - which includes the villages of Gataivai, Gautavai, Sili, Papa Puleia and Puleia - on Friday, which collected a total of 1737 valid votes according to Office of the Electoral Commission figures.

While Faumuina trailed closely behind his two opponents, the main polling day on Friday saw the gap widen between the F.A.S.T. duo and H.R.P.P's sole candidate.

In the very first booth at Gataivai Methodist Church, Tiatia claimed 315 votes whilst Faumuina and Leota received 21 votes each; from there it was a downhill battle for the former M.P.

71-year-old Tiatia said becoming a Member of Parliament for his constituency is a lifelong ambition.

"Even though I am getting old, (but) the desire to run for the election still sparks within me, hence why I keep trying."

In saying that, Tiatia said his aspiration "to serve" is the main factor that pushes him to keep trying.

"It's something that is deep in my heart, I want to represent my constituency in Parliament and serve my people while I am still strong and in good health.

"It's been 20 years since I have tried to become a Member of Parliament. All my attempts in the past were unsuccessful, but that does not stop or discourage me to keep trying.

"I am still sailing my canoe with the hope to achieve my goal."

Unlike other election candidates who have lists of promises to focus on, should they succeed in the upcoming election, there was only one policy Tiatia is campaigning on: to limit the Prime Minister's term to only two terms.

It was also why he chose to join the F.A.S.T. political party.