Samoa
A dragonfruit is bright and pink on the outside and white on the inside. (Photo: Anetone Sagaga)
By Tina Mata'afa-Tufele •   09 March 2021, 2:00PM

The cactus fruit is sweet, tasty with a light texture and rich in antioxidants.

Nu’u farmer Louise Main, 64 - known affectionately as the "Dragon Lady" - says its visual appeal is helping drive a surge in the fruit’s popularity.

“I have been growing dragon fruit for a long time, for about eight years. We were one of the first to bring it in. I think we were the first to kind of like to spread it around,” Ms. Main told the Samoa Observer.

“So it’s a cactus fruit, it’s a tropical cactus and it does very well in Samoa. It’s a very popular fruit overseas. You know, it’s very marketable because it’s very pretty and it’s very nutritious.

“It’s got high nutritional value and it’s relatively an easy crop to grow because it’s pest free. It is not prone to diseases and pests.”

While she has been cultivating dragon fruit for almost a decade, she says recently the eye-catching pink and green fruit has gained popularity among local growers and consumers.

Ms. Main is a member of the Samoa Women’s Association of Growers (S.W.A.G.). She has a farm in Nuu but her dragon fruit is grown at a second farm in Alafua. 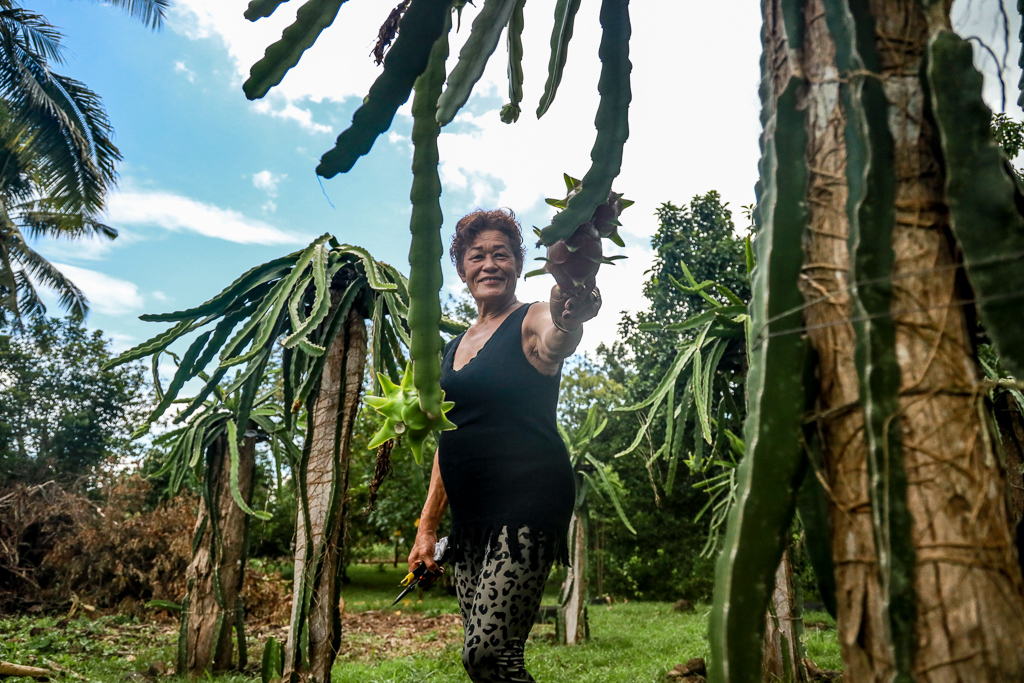 Next door in Alafua, her sister Beverly Arp, 66, grows dragon fruit too. Ms. Arp, also a member of S.W.A.G. said the fruit is perfect for people who are diabetic.

“I’m a diabetic and these are very good fruits for diabetics to eat. It’s healthier than mango or papaya. They are the same as berries…basically it’s good for diabetic people because our tropical fruits – mangoes, papaya and bananas, they are full of sugar,” said Ms. Arp.

“I got the cuttings from Louise…my sister grows it but mainly for her family but I have been selling it at the market. I sell it to Lynn’s and at my daughter’s shop All Things Sweet. My daughter usually has a regular supply because I supply her every week.”

She has one and two-year-old plants.

The dragon fruits are seasonal and are ready for harvest in the fall in October or November. Dragon fruit season ends around March or April.

“They flower, they go green and then they ripen. The season ends in March…they need the sun, they don’t like being in the shade…they do not require a lot of maintenance,” Ms Arp explained.

Her younger sister Ms. Main is known as the Dragon Lady.

“I encourage as many people in Samoa to grow it so we have a high-value fruit for which we can look for an export market in the future. I did mine the hard way. It’s not the route I would suggest to farmers…I planted mine from seeds so it took almost five years before the first fruit,” said Ms. Main.

“That is because I developed it from seeds but if you plant a cutting from it – everyone is very lucky because I am giving out cuttings.

“Cuttings only take about a year or a year and a half before [starting] to fruit. It makes sense to not go the route I did. I needed to do that because the seeds were imported. I didn’t import the cuttings. I imported the seeds.” 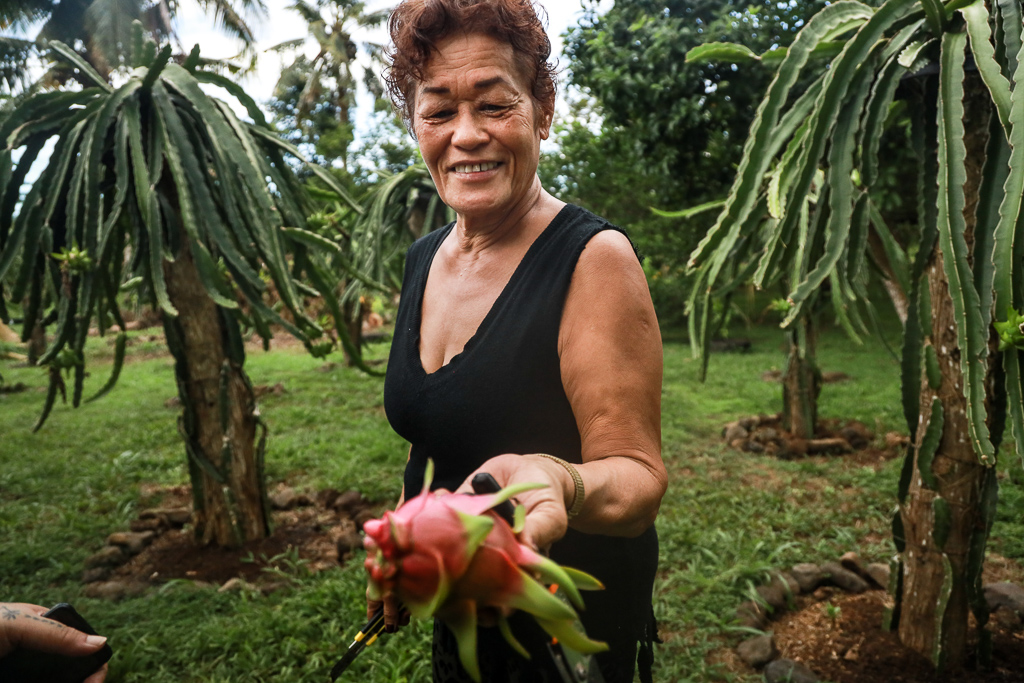 She admits the fruit is “high-priced” and it goes for $8 tala to $20 tala per fruit on the local market.

“It’s a high-priced fruit. When I first brought it in, it was $20 tala a fruit. I really want to plant more dragons I guess but until we are united as farmers and are committed to growing it, only then can we create an export market,” said Ms. Main.

“I can’t do it alone. You need a large number of dragon fruits to create an export market but if places like the Philippines can…I can’t see why we can’t do it here. It is now $10 per fruit…my friends are beginning to grow the fruit and it would be great to have more interest in it.”

Ms. Arp sells her dragon fruit every Saturday at the S.W.A.G. Saturday market at the Samoa Tourism Authority (S.T.A.) fale Samoa in Apia.

“I am selling at S.W.A.G. every Saturday…every weekend but not this weekend because they are not ripe yet. They are just ripening up but next weekend yes,” she said.

“They used to call Louise the dragon lady but I think I am taking over as her namesake.”

Ms. Main insists the dragon fruit does not need much marketing because it sells itself.