The percentage of children under five years old suffering from wasting in Samoa is higher compared to Nauru, Tuvalu, Kiribati and Marshall islands, standing at 3.9 per cent. (Photo: Areta Areta)
Health

A report jointly written by a range of preeminent multilateral bodies notes that food security remains a major concern in the broader Asia-Pacific region.

Samoa is one of the few Pacific Island nations included in the report, along with the Solomon Islands, Vanuatu, Fiji, Marshall Islands, Papua New Guinea, Kiribati and Tonga.

The report highlights that while region-wide trends in the prevalence of stunting and wasting in young children indicate some progress towards 2030 targets, the levels are still “unacceptably high” in many countries in the region.

“There are still 351 million people undernourished in the Asia and Pacific region, more than half of the global total (688 million),” the report reads.

“This means a large number of people need to escape food insecurity and malnutrition over the next ten years. The COVID-19 pandemic will hinder progress even further.”

At the same time, the increasing prevalence of overweight and obesity in adults and children is “extremely worrisome”.

The report shows that Samoa has one of the lowest rates of undernourishment in Asia and the Pacific, lower than 2.5 per cent.

Samoa has the lowest level of prevalence of undernourishment in the Oceania region.

Similarly, Samoa holds the lowest percentage (13 per cent) of children under the age of five not growing well in the entire Asia and Pacific region.

The prevalence of stunting in children under five-years-old – a nutritional disorder of children failing to achieve their genetic potential for height – in Samoa is also the lowest in Oceania compared to Fiji at close to 10 per cent.

However, the percentage of children under five years old suffering from wasting in Samoa is higher compared to Nauru, Tuvalu, Kiribati and Marshall islands, standing at 3.9 per cent.

Wasting can be caused by illness, inadequate food intake or feeding practices, as well as poor hygiene and sanitation.

“Previously malnourished mothers are more likely to have stunted children compared to their well-nourished peers,” the report reads.

“There is also variation by sex of the child, with boys tending to be more malnourished than girls, but that difference is much less than for the other factors.

“The trends in overweight among developing countries in the region are the reverse: children who live in wealthier families, in urban areas and those whose mothers are more educated are more likely to be overweight.”

As the report charts the prevalence of overweight and obese adults in the region, Samoa’s population percentage increases significantly. 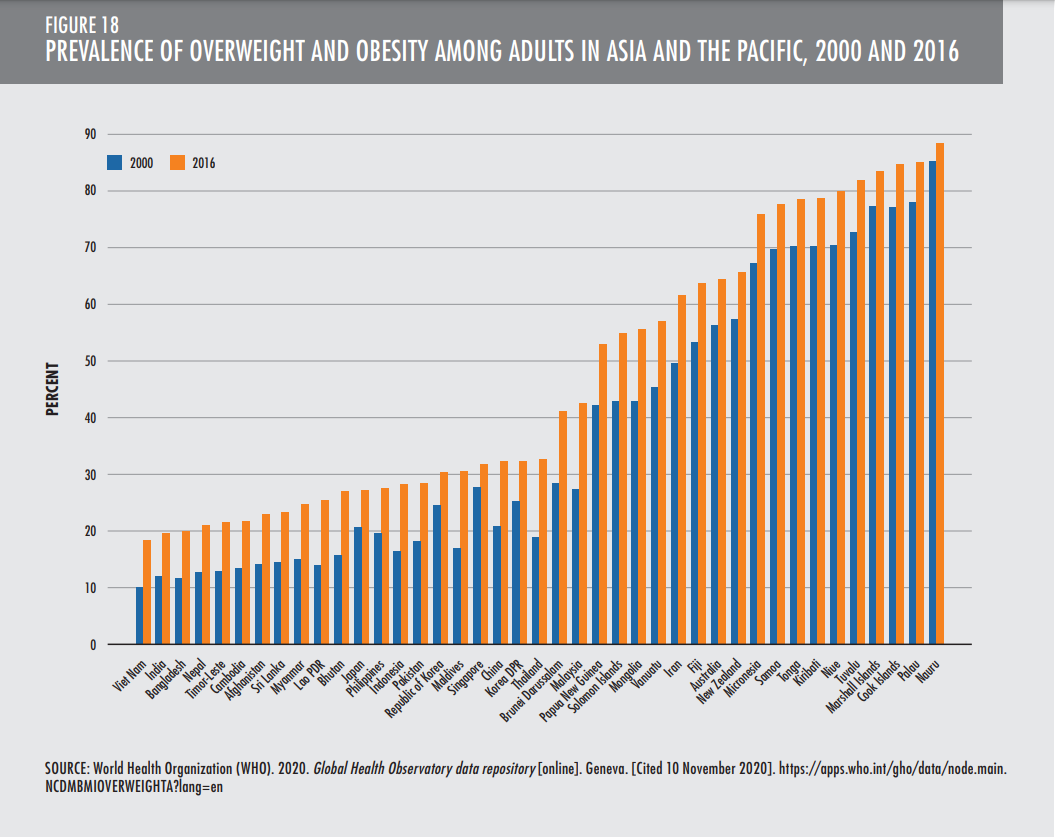 The report says obesity is an epidemic of the 21st century, increasing the risk of non-communicable diseases, such as diabetes, cardiovascular heart diseases, strokes and certain cancers.

“The Asia–Pacific region is home to the largest absolute number of overweight and obese people, about 1 billion, or about 40 per cent of the global total,” the report reads.

“The region has enjoyed impressive economic progress over the past three decades. This economic growth and rapid urbanization are associated with more sedentary lifestyles, a shift in eating patterns, and a ‘nutrition transition’ towards increased reliance upon highly processed foods, increased away-from-home food intake, and increased use of fats, salt, sugars and sugar-sweetened beverages.

Papua New Guinea and Tonga hold the highest prevalence of overweight children under five in the whole region put together, at 13.7 per cent and 17.3 per cent respectively.

Prevalence of overweight and obesity among adults in Asia and the Pacific increased for every single country in 2016, compared to 2000.

Non-communicable diseases (N.C.D.s) like diabetes, hypertension and kidney disease are among the leading causes of sickness and death in Samoa. Over 70 per cent of Samoans are afflicted, and another 50 per cent are at high risk of developing an N.C.D.

In 2017, chronic kidney disease and hypertensive heart disease were in the top ten, as are the diseases commonly caused by smoking and alcohol:  chronic obstructive pulmonary disease and cirrhosis (lung and liver disease).

Diabetes was the number one cause of disability, and the second most common cause of death and disability combined.

Today, there are currently 120 people getting dialysis treatment in Samoa, some of whom are under 20-years-old.

Additionally, N.C.D.s are also the leading driver of overseas medical treatment, accounting for 10 to 15 per cent of the total health budget in 2016.