The Central Bank of Samoa (C.B.S.) has reminded the public that pyramid schemes are illegal, following a new scheme gaining popularity on social media.

It is not the first time the Central Bank of Samoa has warned the public from putting their hard-earned money into a scheme where they may never get their money back.

But as pyramid schemes appear to be circulating again, the C.B.S. issued a public statement reminding the public of the risks involved with pyramid schemes including gifting and re-gifting of money.

"The Central Bank of Samoa (C.B.S.) has received reports and allegations of a number of pyramid schemes going around that involve gifting, re-gifting of money and includes recruitment," the Bank release reads.

"C.B.S. wishes to inform the public to be very aware of this in case they fall victim to it. C.B.S. advises the public not to engage or invest in such a scheme as you will lose your hard-earned money."

The release comes days after the Samoa Observer sent questions to the bank asking whether they were aware of the growing popularity of the schemes amongst the communities and what action they were taking to clamp down upon them.

According to the release, a Financial Intelligence Unit of the C.B.S. is currently looking into these schemes. Once this is completed then this will be referred to the Samoa Police Service and other appropriate Ministries for investigation and charges to be filed against the initiators of the schemes.

For the past several weeks, members of the public have expressed enthusiasm on social media and text messages to family and friends about a new scheme promising a return of eight times their initial cash outlay.

The Samoa Observer understands that the scheme is mainly driven by overseas operators who educate local contacts, whom they call agents.

These agents are expected to recruit friends and families to start a chain of "gifting" and "regifting" money amongst members.

The schemes depend upon making money by recruiting an ever-increasing pool of "investors" and the schemes eventually collapse when the recruitment of new investors stops. 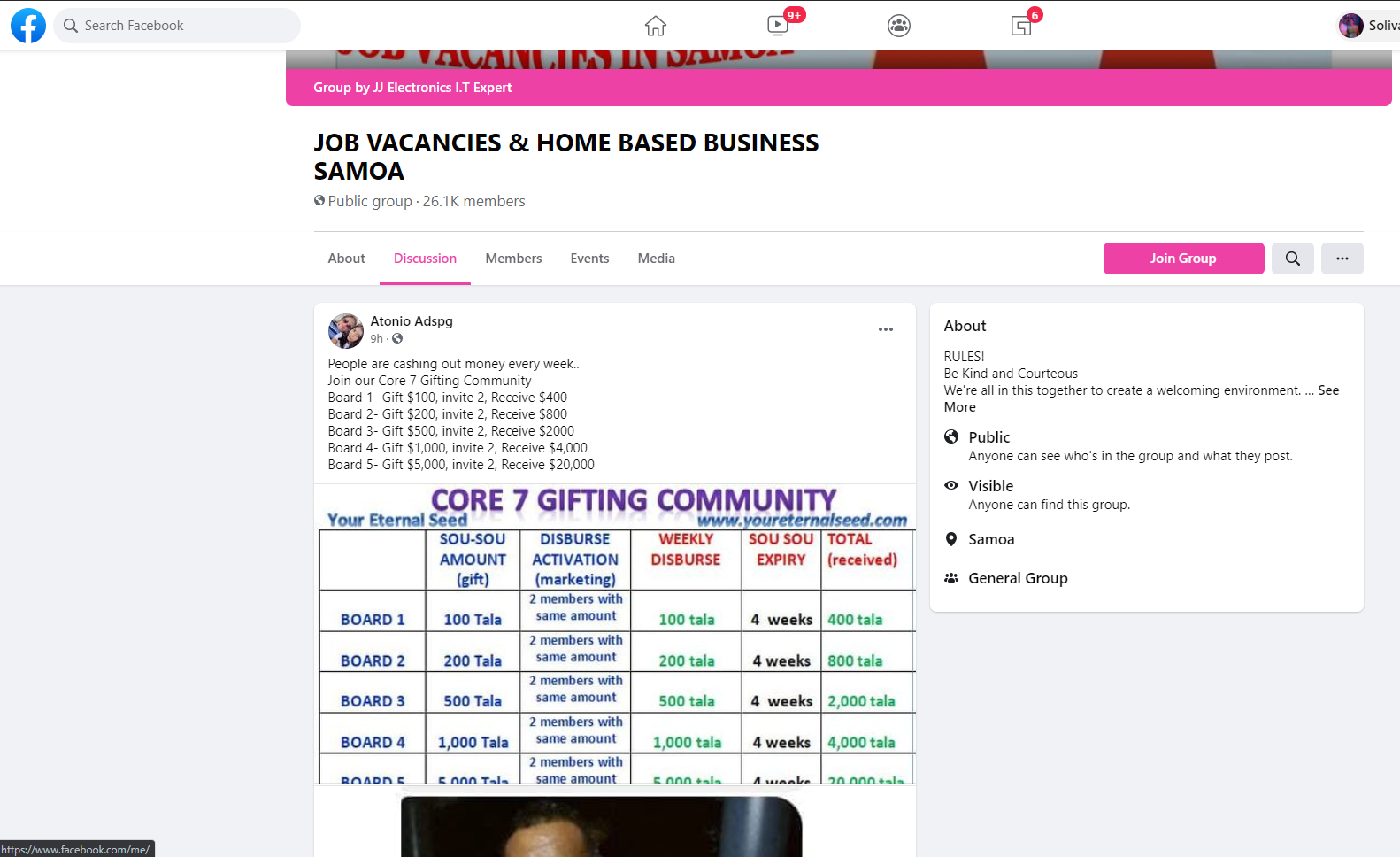 Efforts by the Samoa Observer to get in touch with the operators of platforms promoting the schemes were unsuccessful.

Whilst there are many iterations of the same scheme under various names, the Samoa Observer contacted one currently on island, known as the Sou-Sou Cooperative Society.

One avid advocate of the Sou-Sou scheme online, Atonio Adspg, based in Australia, told the Samoa Observer they have agents operating in Samoa who are personally gathering followers locally.

"Agents are just to explain to the family the concept of Sou Sou and the risk involved. They don’t need to send money to anyone. They can do it among themselves. It’s a gifting program," she said. 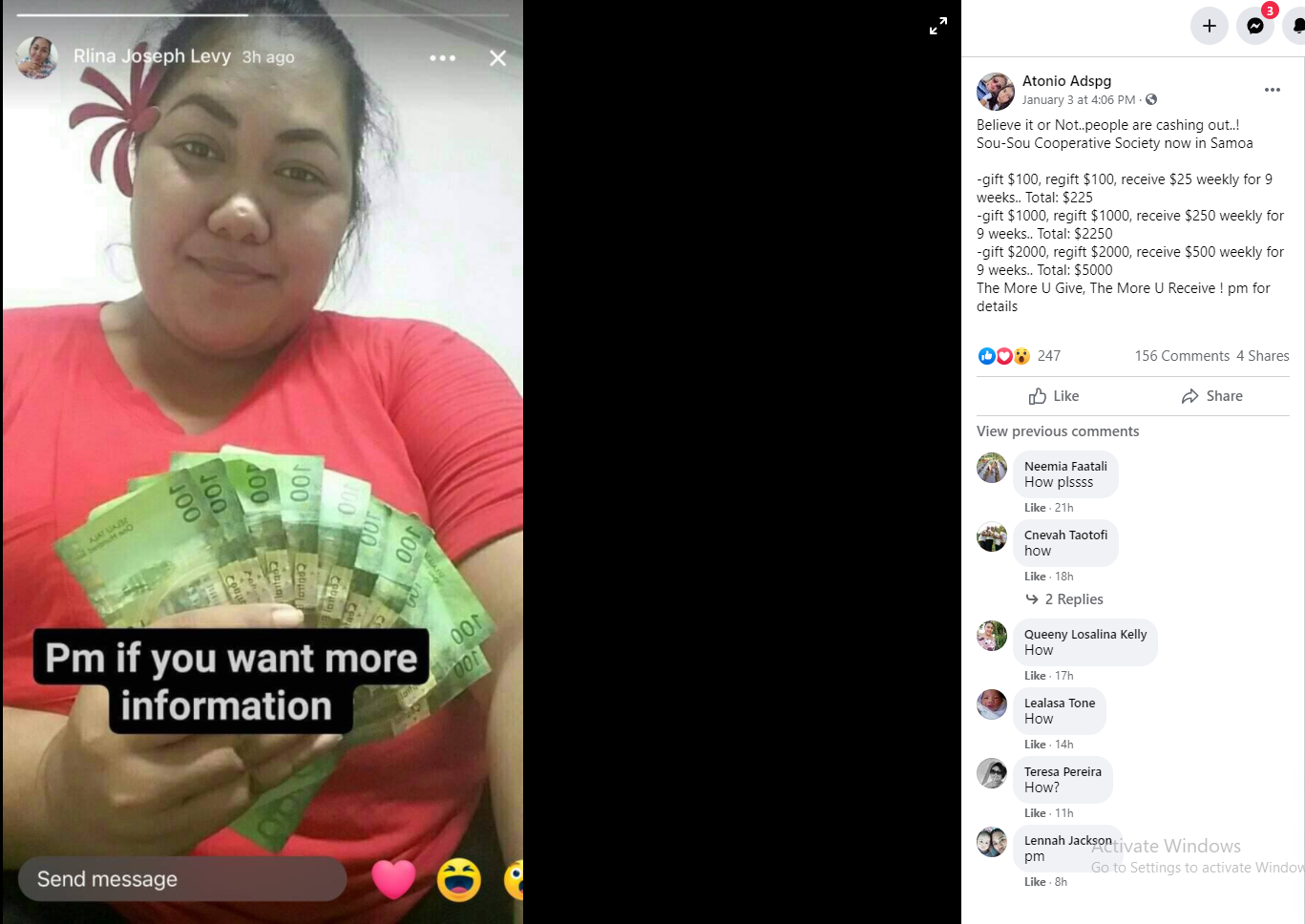 However, the C.B.S. has made it clear that Pyramid Schemes are not allowed in Samoa under section 65 of the Competition and Consumer Act 2016 administered by the Ministry of Commerce  Industry and Labour.

"A person that carries out such activities may also be charged with section  172 of the Crimes Act 2013 for obtaining by Deception or causing a loss by Deception of any property (including money)," the C.B.S. statement read.

"Those convicted may face imprisonment of not more than seven years. These schemes are very dangerous and very risky to invest in with your money. 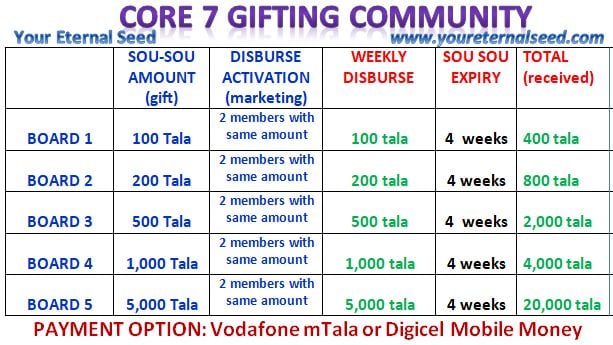 Financial institutions including money transfer operators and banks have also been notified to prohibit any suspicious transactions related to the schemes.

"We would also like to thank these financial institutions for bringing these schemes to our attention," C.B.S. wrote.

"C.B.S. encourages the public to please be vigilant and alert of these get rich quick schemes."