The victim's grieving wife Robyn Fata, her son Galu, 10-month old Malama and Sinabell under the breadfruit tree where their father was shot dead. (Photo: Vaitogi A. Matafeo)

Fata Lole of Afega recalled his harrowing memories of the death of his 35-year-old eldest son, Elisara Fata Lole, on the steps of the family home, in the view of his now orphaned eldest son.

In an interview with the Samoa Observer on Monday, the father ruefully recalled the events leading up to his son's death.

Fata believes his son might be alive today if he had emerged from the family home instead of Elisara to greet an angry villager allegedly toting a gun.

Elisara had just returned home from work and was preparing a cup of tea for the family to welcome the New Year when the alleged suspect pulled up outside their home, Fata recalls.

Fata understands that Elisara did not know that the suspected perpetrator, a man in his 60s, was seeking to take revenge on a man who had earlier allegedly punched him following a case of road rage. He recalls his son unknowingly walking out to greet his alleged assailant to ask him what he wanted. 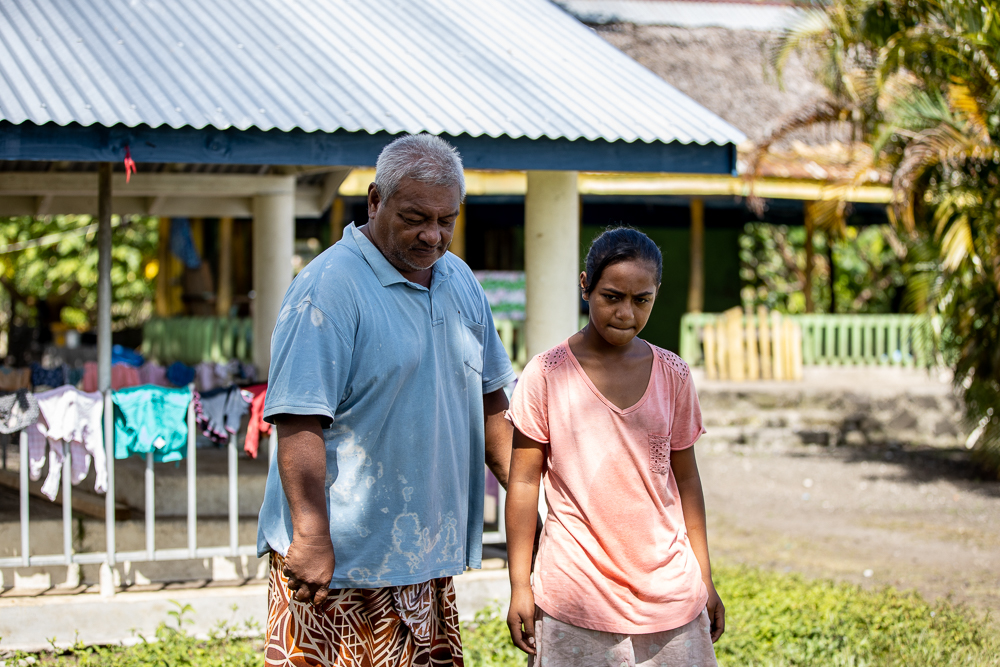 “I saw him [the suspect] approaching the house when he got out of the car,” said Fata, recalling the shooting that occurred after the clock had already struck midnight.

“Before I could walk out I saw my son coming out to meet him and ask what he wanted.

“I heard him asking my son where the person that punched him [was] and Elisara told him he [didn’t] know.

“He didn’t say anything else and just held the gun [at] close range [less than one metre] and shot my son.”

Fata says that his grandchildren, including Elisara’s own eldest son, were inside the house at the time and saw the events unfold.

Elisara was the eldest of Fata’s six children, a carpenter and a father-of-four, including his youngest - a 10-month-old daughter.

Fata said in the days since his grandson has been talking about what happened to his father and the ordeal of witnessing his death.

Shortly after Elisara was shot, Fata said he retreated back into the house, fearing that he could be attacked next if he approached the suspect.

He said after his son was shot the suspect walked away from their home and onto the road. 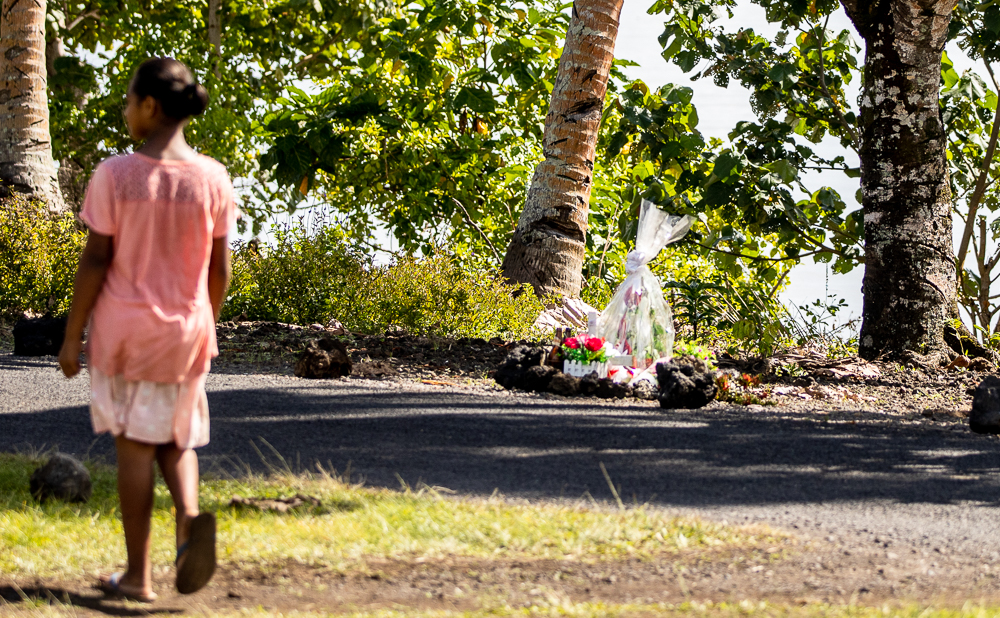 “He fired off another gunshot just down there [in front of our neighbour],” he alleged.

“Someone might have told him that one of the men walking on the road had punched him and then he walked up to Fata Utufua who was with other people and shot him twice in close range as well.”

Elisara, walked away from the spot outside his parents' house where he had been shot before falling unconscious under a breadfruit tree some five metres away and dying.

A second victim of the shooting that evening, Fata Utufua was alleged to have been shot on the road about 10 metres away from Elisara.

Asked if he was aware of what led to the later incident, Fata said he believes his son-in-law and the second shooting victim may have been involved in a road rage incident earlier on.

Fata said his son-in-law, his 20-year-old son and the second person to have been shot dead that night had taken his car to go shopping earlier that night.

He believes the trouble may have started after the men and the suspect might have been involved in a near-miss traffic accident just down the road in the village, which allegedly ended with one of the men swearing at the suspect.

“I don’t know what really happened and who punched him [the suspect] but that was where it started,” he claimed.

“I’m told that he fired off the gun down there and had followed the men.

“My son in-law and son came back and parked the car there [next to the house] and Fata Utufua wasn’t with them this time.

“Not long after that he [the suspect] pulled in front of the house and did what he did and shot my son who had nothing to do with what happened.”

Looking at the spot under the breadfruit tree, where flowers are now placed to mark the spot where his son died, Fata says the past few days have been hard and that he gets flashbacks of the tragedy.

“It’s difficult to forget, I can still see what happened to my son,” said the grieving father.

“His own children, his own son saw their father getting shot.

“The saddest part of what happened is it occurred on New Year’s [Eve] when we were welcoming the new year.”

The father denied claims that his son had been drinking with the suspect. 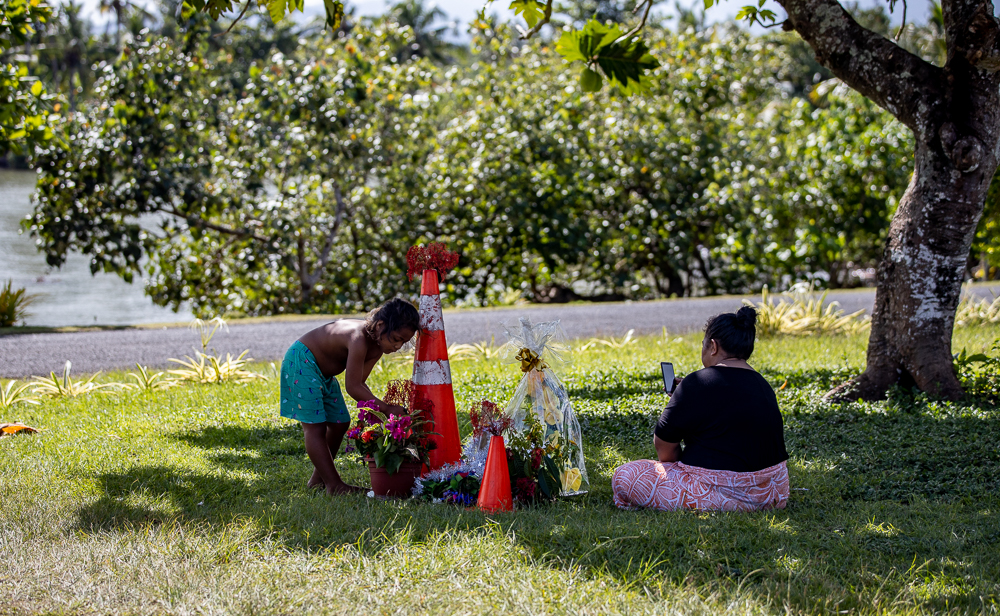 He said his son had just returned home from work and might have had drinks at his workplace earlier on.

“But he didn’t drink with him [the suspect] or even know him,” he said, saying that he believed that his son's alleged assailant had only recently moved to the country.

“There are also reports that say that [...] my son [had previously] beat up the suspect but that is not true.

“Everyone knows my son and he is a comedian, a funny guy and doesn’t cause trouble or had he even gone to that man’s home and beat him up.”

Fata described Elisara as his right hand whom he relied on to fix and connect their lights and repair their family home.

“He is dearly missed and my heart feels for his wife and four children who are too young to understand what happened to their father,” he said.

Elisara is survived by his wife, Robyn Fata, and their four children.

In a recent interview with Police Commissioner, Fuiavailiili Egon Keil he confirmed a low-calibre .22 millimetre handgun was the murder weapon used in the incident.

He said the perpetrator was in Police custody and expected to be charged later that day.

The death of the two men from Afega on New Year’s day was one of four deaths over the 24-hours coinciding with New Year’s eve, including a separate alleged murder in Fagaloa.