Samoa Airways’ new Boeing 737-800 spotted at the Woensdrecht Air Base in the Netherlands. (Photo: Ralph Hamaker/Flickr)

A new Samoa Airways Boeing 737-800 is is about three weeks from landing at Faleolo Airport, the Minister of Public Enterprise, Lautafi Fio Purcell, says.

But as leasing arrangements and other final preparations for the aircraft are being finalised, plans for its delivery will also be subject to change according to Samoa’s COVID-19 response and border controls, the Minister said.

"The plane is still in [the] Netherlands, once the lease is confirmed signed, then the plane will start its journey over (to [New Zealand] where it will go through its final certification and physical checks)," Lautafi said.

(The Minister's qualifications follow the discovery of a new mutation of the virus in New Zealand earlier this week).

Lautafi, who is also the Minister of Commerce Industry and Labour, said the aircraft is undergoing final preparations.

"Plans are for the plane to arrive in Samoa around the last week [...of] January or first week [of February],” he said in a written response to questions from this newspaper.

“[It will be ready] after [the] final certification process and physical checks.”

He added that the paperwork concerning the aircraft's lease was yet to be finalised.

"The Office of the A.G. [Attorney-General] is going through the finer details of the lease document before the lease is confirmed and signed, hopefully within a week or so," Lautafi said.

"Then the plane starts its journey over." 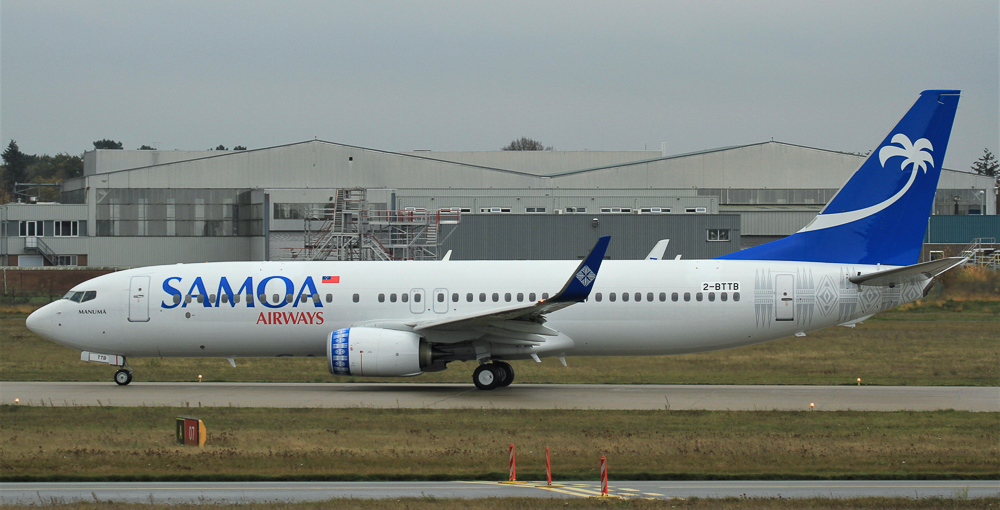 Samoan pilots will be flying in the new aircraft with only cargo onboard, the Minister confirmed.

"[Our] plans are for the plane to bring cargo only, no passengers from [New Zealand] on that flight [route]," Lautafi said.

"All these plans are subject to any new developments put in place due to COVID-19."

Samoa Airways has been without an aircraft since March this year when the Government ended its lease with the Malaysian-headquartered Malindo Air.

The ending of the lease came as international flights all but ground to a halt when the peaking of the novel coronavirus pandemic severely curtailed international travel.

Documents obtained by the Samoa Observer last month revealed that the lease had come at a price of $3.28 million a month and followed a global shortage of international airliners following the grounding of the Boeing 737-MAX.

(Samoa Airways had been on the verge of leasing a 737-MAX model aircraft model shortly before the entire fleet was grounded, falling crashes in Indonesia and Africa, forcing it into a hasty search for a replacement.)

Since the lease’s termination, a new plane for the national carrier has been publicly announced by Government officials as arriving in Samoa as early as last July.

It is understood the aircraft will be leased from Dutch company, Fokker Techniek M.R.O., a leading aircraft maintenance and completion company based in Woensdrecht, the Netherlands.

He added that the “dry lease” will allow an all-Samoan crew to be employed. (Under the terms of the “wet leasing” arrangement with Malindo Air foreign employees staffed the plane).

Last year, in November, the aircraft, replete with Samoa Airways’ insignia was spotted by an avid plane photographer, at the Woensdrecht Air Base in the Netherlands. The plane was even named: Manuma.

The plane’s new decals were not particularly distinct as those on the last plane, with only a few new additions.

The tail sported traditional grey patterns associated with the airline's corporate presence; the nose of the plane is bright blue.

Registration details reveal it to be six years old and having been built in 2014 at Boeing’s plant in Renton.

It has changed hands four times before its coming lease with Samoa Airways.

* An earlier version of this story incorrectly stated that the plane was in New Zealand. It has been updated to reflect the fact that it it is currently in in the Netherlands, following a clarification from the Minister.