A Samoan civil engineer’s experience taking care of her hospitalised father led to her making a career change to become a doctor.

Miriam Anne Karalus, 32, abandoned her career as a civil engineer to return to university to pursue a medical degree after caring for her father in hospital after he had a stroke.

She told the Samoa Observer that those times she took care of her father in hospital opened her eyes to the critical role that doctors play when they attended to their patients.

"This really impacted on me, after working as a civil engineer for a couple of years, I realised that maybe my calling was towards a different vocation in medicine, where I could help others during their times of illness," Ms Karalus said.

But returning to the life of a student back then, whilst having a fulltime job, is not for the "faint of heart" as she struggled to adapt.

"It was a struggle for me to adapt from being able to contribute to society through employment, to relying on financial support to get by,” she added. “The studying part of it was not too difficult as I was familiar with the expectations of tertiary level education.”

Ms Karalus's family were deeply connected to the field of medicine, from her great grandmother who was a nursing supervisor in Samoa, to her grandmother who also worked as a nurse, as well as her doctor-and-nurse parents who met a Napier Hospital, and her four siblings who also graduated from the University of Auckland Medical School.

"I remember sitting at the dinner table and my medical siblings would converse with my father about medical things and it was like they were speaking a different language," she recalled. "Ultimately my family was happy that I had chosen to do something different with engineering. I admire my siblings that have pursued careers outside of health, for their ingenuity." 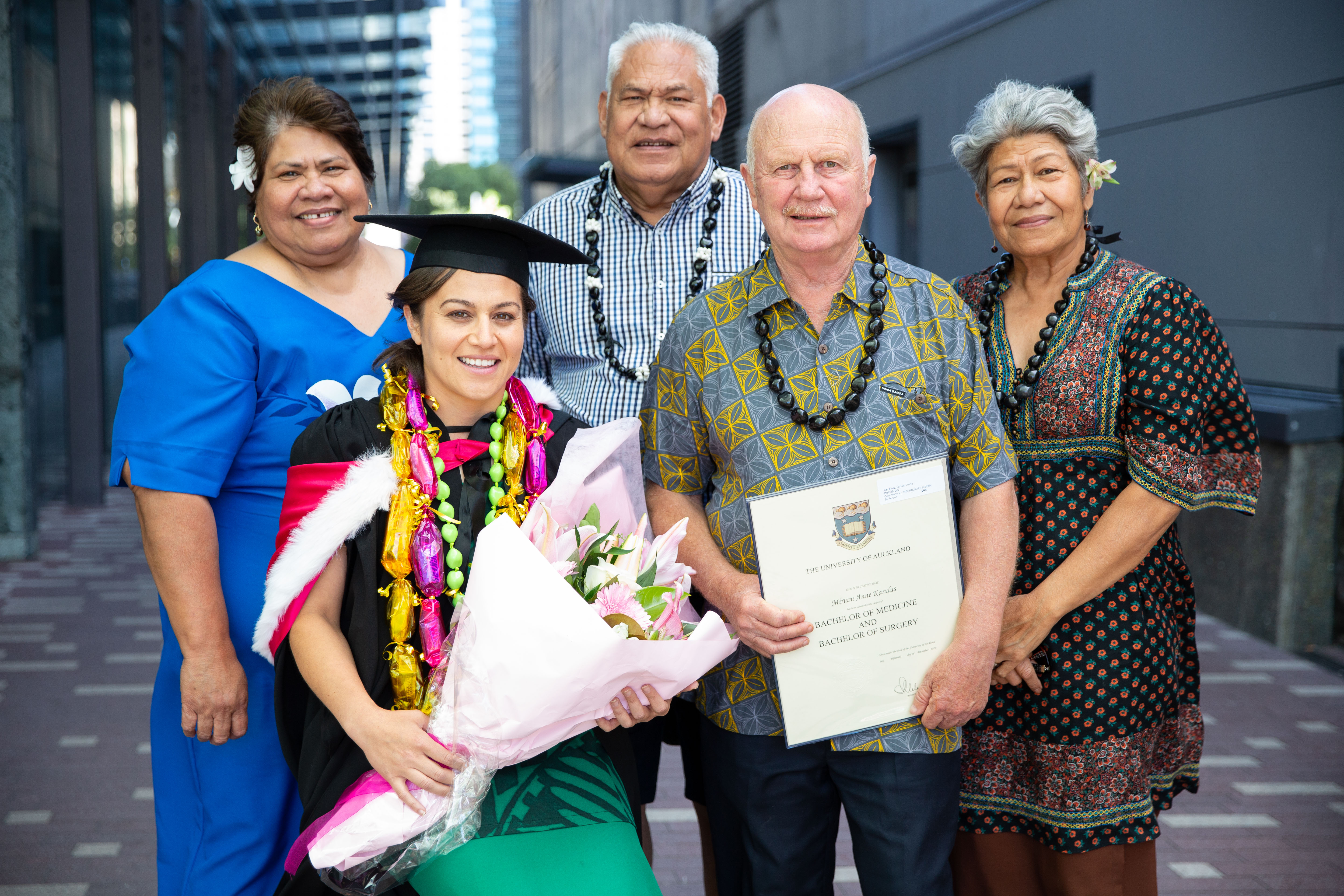 Nonetheless, having her siblings around to support her throughout her medicine studies was a blessing in disguise, said Ms Karalus. Though they were not able to do the learning for her, their advice and guidance was an advantage.

"They helped me to put things into perspective when the studies could have easily overwhelmed me, and they kept me grounded. They still give me tips from their experiences, which I am grateful for," she said.

During Samoa’s measles outbreak in 2019, Ms Karalus worked in the kidney unit of the Tupua Tamasese Meaole National Hospital at Moto’otua, as an elective of her medicine degree from the University of Auckland.

Three of her siblings – who are also doctors –  also worked as volunteers during the measles outbreak under the umbrella of Samoan Doctors Worldwide.

Ms Karalus was recently awarded a Pacific Medical Association Scholarship known as the Dr Leopino Foliaki University of Auckland Scholarship, which she described in an email response to the Samoa Observer as a “testament” of what God has done in her life.

"To have been able to complete my studies and be awarded a scholarship by the Pacific Medical Association is a testament to God's guidance over my life, as well as His providence," she said. "My faith has been the single most important factor underpinning my success. The achievements speak less about me and more about my family, especially my parents, my aunties and uncles in Samoa who supported me during my placement in the dialysis unit, and my aunties and uncles in New Zealand.”

While Ms Karalus, who will now work as a junior Doctor at Waikato Hospital in Hamilton this year, is keen on general practice and dermatology, she said she is just excited to get some experience in the hospital and hopefully return to Samoa in the near future.

She is the daughter of Pauli Noel Karalus and Leaupepe Elisapeta Karalus and is the seventh of nine children. The family is from the villages of Fasito'o-uta, Salelologa, Luatuanuu and Tulaele.