While the nation is preparing to usher in a new year in two days, some families living in flood-stricken Fugalei, Taufusi, Saleufi and some parts of Moamoa are still reeling from the impact of the worst floods to have struck Samoa in recent memory.

Describing the floods of two weeks ago as the worst they have seen in years, the families are still struggling to come to terms with the aftermath as they try to pick up the pieces.

A family from Moamoa who lives right next to the Moamoa bridge are grateful to have made it to safety that day when the river burst over the banks.  Speaking to the Samoa Observer,  Liz Fonotuli who lives next to the river with her family said that it was nothing they've experienced before. 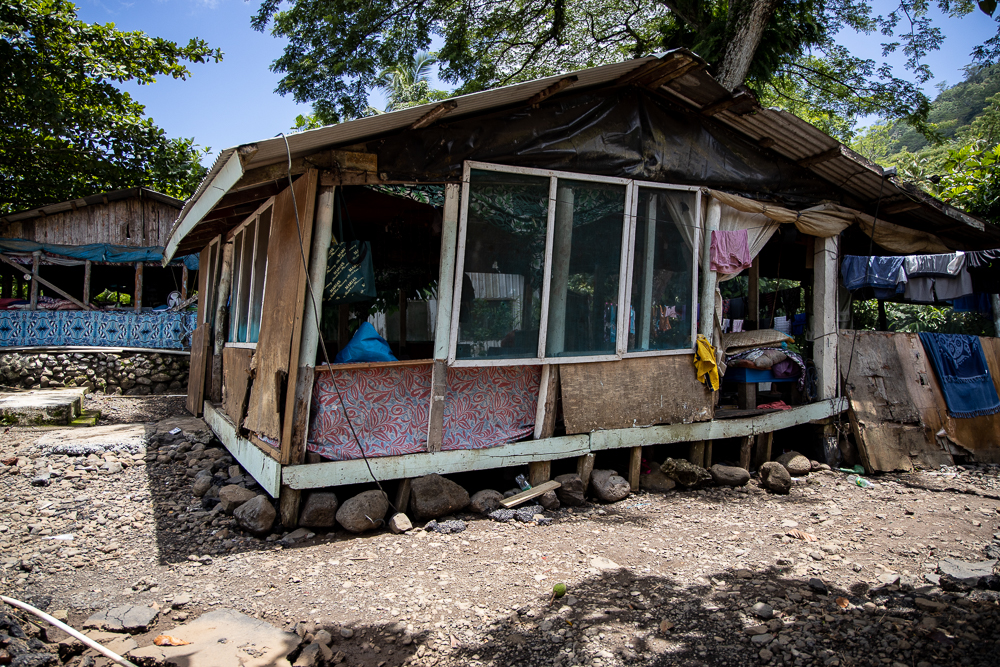 "When the river broke that day, we thought it wasn’t going to be that bad but the when later on that day it was a disaster that brought all the logs and rubbish and took all our furniture," Ms. Fonotuli said

"Usually when the river breaks, it’s not that bad but this year was something else. We’ve lived here for a while now and we have never seen anything like this."

Their open house was flooded and had taken away some of the appliances. Ms. Fonotuli said they found shelter at their aunt's house where they were grateful the kids were all safe.

"The water came right through our house bringing logs inside and most of our furniture like our TV, stove, fridge and cabinet was all washed away by the floods and into the river," she said. "We sought refuge at our aunt’s house that day. We didn’t care about any of our belongings, all we were grateful for to God that day was that our children were safe." 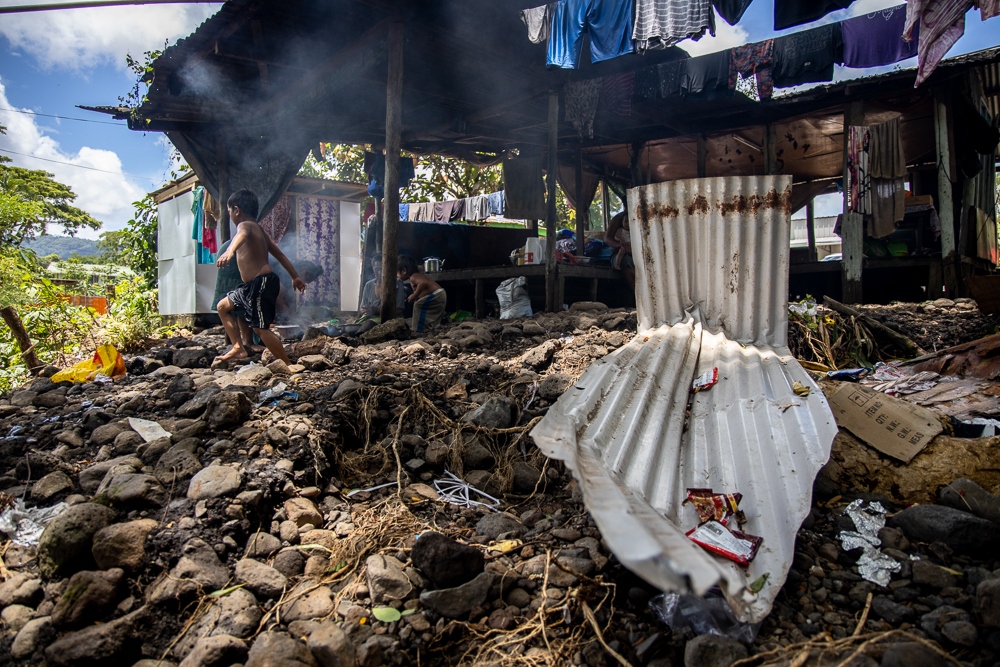 The water took down their cook-house (umukuka) and a part of their home as well. The water even destroyed the neighbouring family's cookhouse.

"Just at the back of our house was our cook-house (umukuka) but after the flooding, it took down our kitchen and left a big pit. Our shower as well was there, it all went down so we’ve shifted it to the other side of the house," she said. "Even the house next to us, their kitchen was also damaged and the one on the other side as well. We’re lucky our house is still standing.

"The water took down the back of our house as well and as you can see there at the back post of the house, it doesn’t look firm."

Ms. Fonotuli added that there were families that gave out bags of clothes for them as well as pillows because most of their things were washed away by the water.

However, she said the only thing their family needs right now is their appliances and furniture that were washed away by the water.

"I think the only things we need right now is our furniture and appliances that were damaged," she said. 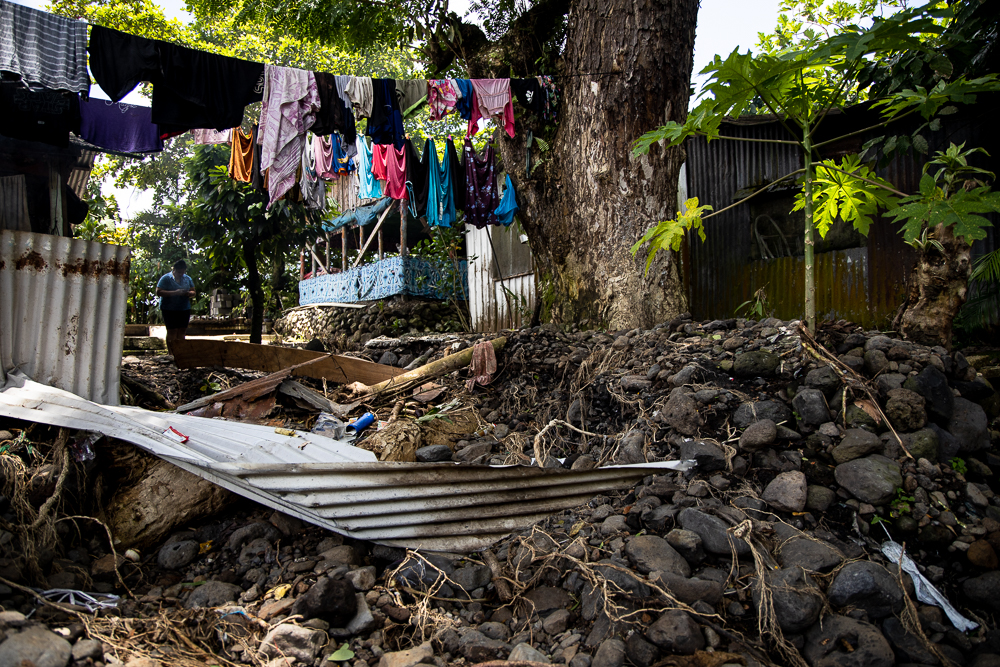 "That day all we had in mind was to stay alive and to be able to survive, we left all our belongings and took shelter at our relative’s house.

"My aunt almost got caught up in the water but luckily she was able to hold on to one of our cocoa trees."

A 70-year old resident of Vaimoso shared the same saying that since she has lived at Vaimoso, the recent flooding was something she has never seen before.

"In previous years, it wasn’t this bad. It does flood but the water never came into the house and the water level is low. Ever since I lived here at Vaimoso, I have never seen anything like this recent flooding," she said.

"It was bad, the water level was very high that it reached our patio fence and so we just left it because there was nothing we could do and we went up to the second floor of our house."

According to this 70-year-old resident who did not want to be named, they've experienced the impact of flooding in the previous years and it was from there that they had decided to build a second floor to their home for safety.

"We had just completed the second floor of our home and then the flooding came. My children told me that it would be good to have a second floor in case anything like this happens," she said

Their whole family slept on the second floor that night because the water came up to a high level on the first floor. She also added that her children had to run their errands using boats because no one was able to walk outside that day.

The problem that the family is currently facing is the remains from the flooding such as the rubbish, the mud, dirt and the dust. Her children had to clear out the mud on after the flooding to enable vehicles to pass. 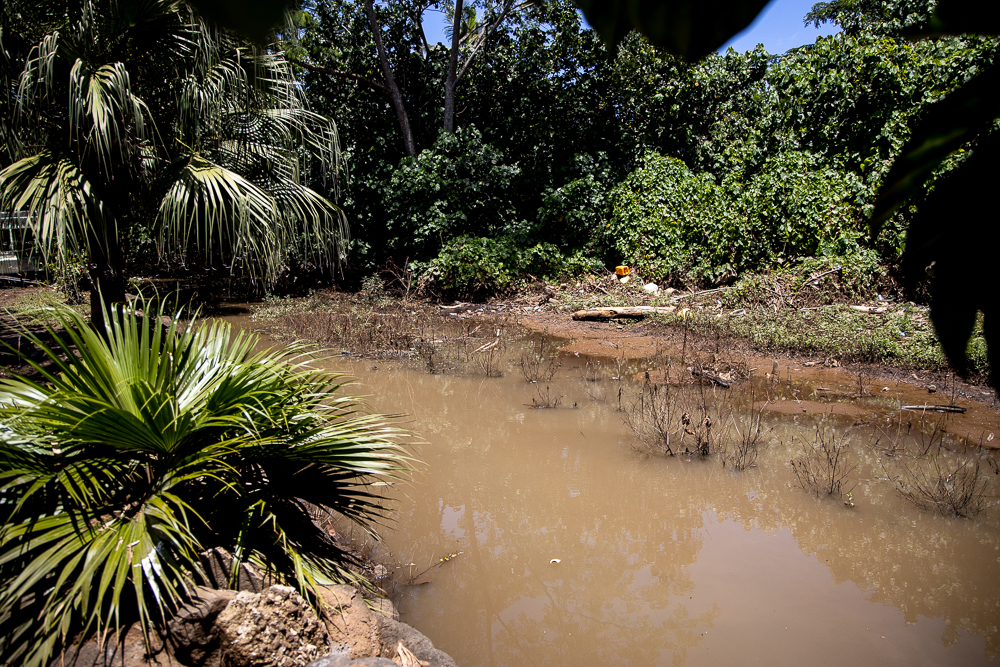 "The only problem now is the dirt and mud outside. My children had to clear the muddy road after the flooding because cars were unable to pass with how thick the mud was," the 70-year-old resident said.

"Even up until now we’re still trying to clean up around our house. We’re really affected because we’re at the end of the river here and all the rubbish gets washed up in front of our house."

Lui Latulipe of Saleufi also shared the same problem that he is now facing after the flood. The thick mud and dirt around his home to which he now has to wear gumboots in order to get around.

He described the flooding as a river which he said was very deep and that if the children were to get caught up in they would've drowned or have been swept away.

"It was like a river here that day but luckily the water didn’t reach my house, it almost did though. But around this area, the water level was high that it would have gone past my stomach if I had stood in it," Mr. Latulipe said.

"It was only me here that day because my wife and kids were in Savaii then. There were other families here before but they had moved away because of the same issue with the flooding."

He went on to say that the drainage and rivers are not deep enough and that it needs to be dredged to reduce the impacts of flooding.