The Commissioner of Police has issued a warning against drunk driving during the festive season following the death of two men in Aleisa last weekend.

Fuiavaili'ili Egon Keil said preliminary investigations by the Police point to alcohol being a factor in a vehicle crash at Aleisa.

“It is unfortunate, hence reminding the public of the danger of drunk driving and the need to get behind the wheel when under the influence of alcohol,” he said.

“Preliminary investigation reveals that two men died in a car accident in Aleisa and alcohol is a factor.”

A video of the accident in Aleisa emerged on social media and has since been removed.

Another traffic crash last weekend involving a Ministry of Education Sports and Culture (M.E.S.C.)-owned vehicle is also connected to alcohol, added the Commissioner.

The driver of the Ministry’s vehicle is reportedly in a coma at the Tupua Tamasese Meaole National Hospital in Moto’otua.

The crash occurred in Tuanaimato in the early hours of the morning last Saturday.

The Commissioner said heading into the festive season, last weekend’s two traffic fatalities with another man fighting for his life in hospital is not a good start.

“We have done so much in terms of awareness on the television, radio, roadblocks and working with the village councils in pushing this message across that drunk driving is dangerous,” he lamented.

“I have also pitched to the Liquor Board ways to limit the sale and the availability of alcohol, especially during this season. Students were also found under the influence of alcohol.”

Appealing to members of the public to consume alcohol responsibly, Fuiavaili'ili said statistics show that this time of the year Police are increasingly called to stop fights.

“If you [consume] alcohol, do it in a reasonable manner and do it with constraint and if you’re intoxicated, go home and sleep, but don’t pick fights. 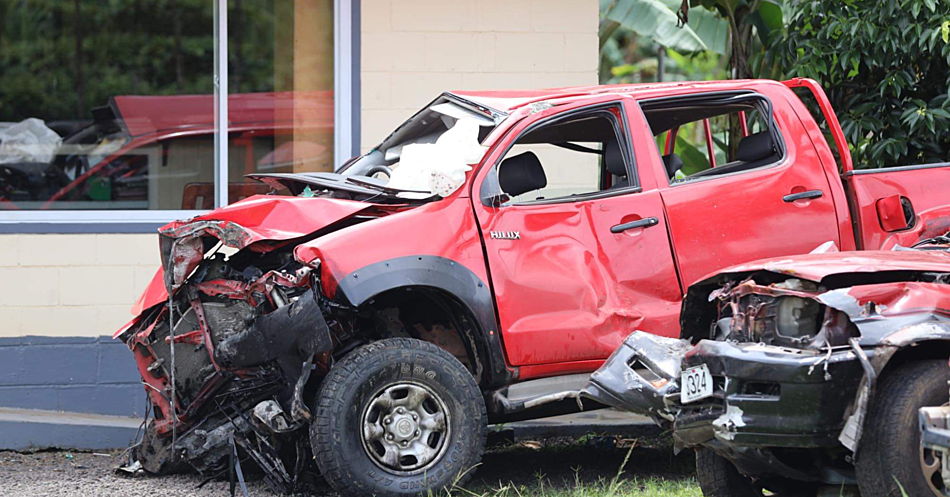 The driver of the M.E.S.C. vehicle in question was reportedly heading home after dropping off Ministry staff who worked overtime during last week’s national exams. But the Minister of Education Sports and Culture, Loau Keneti Sio, told the Samoa Observer that they are still looking into how their vehicle crashed and when.

“But for the time being, we are praying for the recovery of the driver who is fighting for his life at the (hospital’s) intensive care unit,” the Minister said.

Attempts by this newspaper to get comments from the driver’s family in Vaitele-uta were unsuccessful. However, a M.E.S.C. official, who is not authorised to speak to the media, said the red Toyota Hilux Double Cab has crashed before.

“This is not the first time,” the official said. “And all for the same matter, the driver was dropping off staff that worked overtime in connection to the national examinations. This time around the vehicle is a total loss.”

The M.E.S.C. official also expressed concern about the dangers of working overtime over three consecutive days.

“This is the end result. People see a Government car crash yet they don’t know that it’s  a result of overtime working,” he said.

Minister Loau, in response, said he would look into the concerns expressed by the M.E.S.C. official and added efforts should be made to ensure such accidents do not occur under any circumstance.