The Samoa Victim Support Group (S.V.S.G.) and the Saasaai Primary School are the recipients of $740,000 in funding support courtesy of the Japan government.

The two grants, which would come from the Embassy of Japan’s Grant Assistance for Grassroots Human Security Projects Programme, will be used to fund the construction of two shelters for the S.V.S.G. and a school hall for Saasaai Primary School.

Two signing ceremonies were held at the Embassy in Apia on Wednesday with Japan’s Ambassador to Samoa, Genichi Terasawa, and representatives of the humanitarian organisation and school signing off on the funding.

The S.V.S.G. will receive a total of US$193,400 ($497,000 tala) for two shelters for victims of abuse, which would provide protection facilities for vulnerable members of the population, especially women and children who suffer from domestic violence and sexual abuse.

And Saasaai Primary School will receive up to US$95,669 ($243,000 tala) for the construction of a school hall including new toilet facilities. The new facilities will cater for various school activities including assemblies, cultural programs and prize-giving. 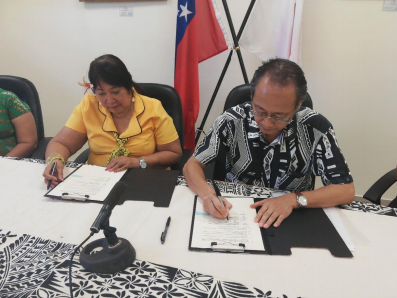 Speaking to the Samoa Observer, S.V.S.G. President Siliniu Lina Chang said the funding assistance is of great importance, as it will be used to build a facility to address the increasing number of victims of different forms of abuse.

She said this year was difficult due to the impact of the COVID-19 pandemic which led to incidents which placed the lives of mothers and children in danger.

Siliniu thanked the Japanese government and Embassy and Ambassador Terasawa for responding positively to their plea for help, which would enable them to save more lives and serve these who are in need.

The Embassy’s grant aims to support small-scale projects that are directly benefiting the community at the grass-roots level as well as contributing to the socio-economic development of Samoa.

The Government of Japan welcomes the opportunities to further work in partnership with the Government of Samoa with a view to advancing human security and community development projects at grass-roots level.