Honolani Sosefina Matamu and Molesi Taeaolelei Pupualii were not ready to throw in the towel, when flash floods overwhelmed Apia town and the surrounding villages last Friday.

The deluge and the flooding that followed, triggered by continuous rain during the week in the lead-up to last Friday, was unprecedented.

All of a sudden the prospect of cancelling the wedding due to the bad weather began to look real with the groom, Mr Pupualii thinking of alternative venues as well as a new date.

"I was worried because I saw the photos on Facebook and it was flooded everywhere, and so I told her [Honolani] to see if there’s a possibility for another alternative or if we could postpone to a later date but she was very optimistic and positive," he said in an interview.

After six years of courting to finally settle on 18 December to tie the knot, Ms Matamu was optimistic that everything would go according to plan and assured her husband-to-be.

But things didn’t appear to get any better as the weather deteriorated with some of their invited guests unable to attend the venue of the ceremony.

"The church service was set for 2:30pm but we postponed it to 3:30pm and by that time the rain had stopped and things were starting to clear up," added the bride.

"My mum was stuck at Sinamoga and I was worried that she wouldn’t make it for the ceremony and then in about half an hour, she just came into the hotel room and there I was calm because she was there."

The program was delayed but the couple eventually took the walk down the aisle at the E.F.K.S. Church Moata’a and were declared man and wife after the church service. The newly-wedded couple then made their way to the TATTE conference room for the reception.

Mrs Pupualii said she and her husband were surprised with the number of guests who turned up, despite the bad weather.

"We did not expect that many people there at the reception and it was more than the number we expected and we were so grateful and overwhelmed with the turn up on the day," she said.

"We understand that some of our families and friends weren’t able to make it that night because of the weather situation."

The couple first met in Fiji in February 2014, when Ms Honolani was in her first year and Mr Pupualii was doing the final semester of his Bachelor of Commerce in Accounting study programme, at the University of the South Pacific (U.S.P.).

They started dating 18 April 2014 with Mr Pupualii admitting, while laughing, that he made the first move.

I did all the chasing. I’ve never seen her before and I only had just met her there [in Fiji]. When I got there, I asked some of the guys who were there who the students were, as I had wanted to know who they were and if there was anyone I know,” he told the Samoa Observer.

“I was told that there were heaps of pastors’ kids and then I finally saw her. But that was my last semester in Fiji, I was doing my Bachelor of Commerce in Accounting and so I was supposed to finish after three years.

“But I had to go back and take up one more paper and so that was my last semester and it was her first year."

For Mr Pupualii, he says it was her smile that caught his attention the first time he saw her, even when she was with her group of friends. 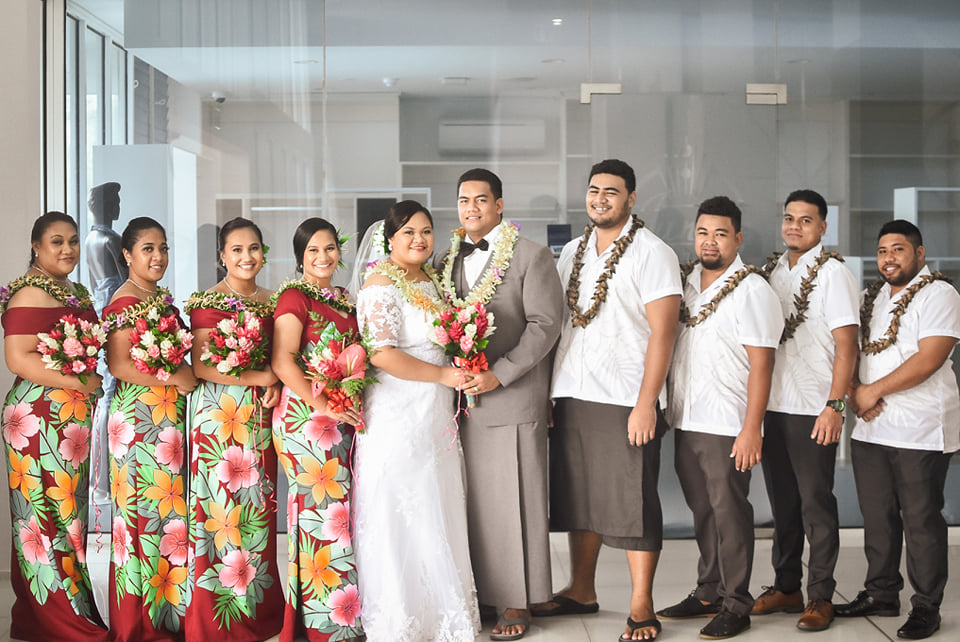 "It was that smile that got me. On the 18th February I arrived in Fiji and that was the same day I saw her coming out of a taxi with three other ladies whilst I was with some guys. The other ladies were talking and she was just smiling and then I asked around who she was."

Mrs Pupualii added that she wasn't looking for a relationship when she first arrived in Fiji, especially in her first year as her focus was on her studies.

But she was smitten on Good Friday the first time she saw him, when the Suva Community Church hosted its annual program for items to be performed.

"I heard that he was in his last semester and I was just in my first year, and you know how Samoans say, ‘fa’amuamua le aoga’ so I wasn’t really into a relationship at the time," she added.

"He probably saw me but I didn’t have those feelings back then because I knew he was almost finished with school and I had just started and that I needed to focus.

"And then on the 18th of April, that was a Good Friday back in Suva and so we usually do items and so our first year did a performance, and we were wearing these butterfly kind of outfits and I think that really caught his attention."

According to Mr Pupualii, they have similar characters and the same upbringing which made it easy to woo her.

"Well she was not that hard [to woo]," he said while laughing. "We have the same character, same upbringing and she wasn’t really into clubbing and I think it was why we [clicked]."

As to their plans for the future, the couple said it is now God’s timing as he makes everything possible, even after the passing of both their fathers.

"We are very blessed to have each other," Mrs Pupualii said, while looking at her husband.

The couple thanked their families, friends and their bridal party for all the support to make their day a success, and acknowledged their mothers for standing by them and aunt Sina Kamu for being their wedding planner.

She works as the Principal of GIS at the Samoa Bureau of Statistics and Mrs Pupualii is an accountant at the Ministry of Finance.