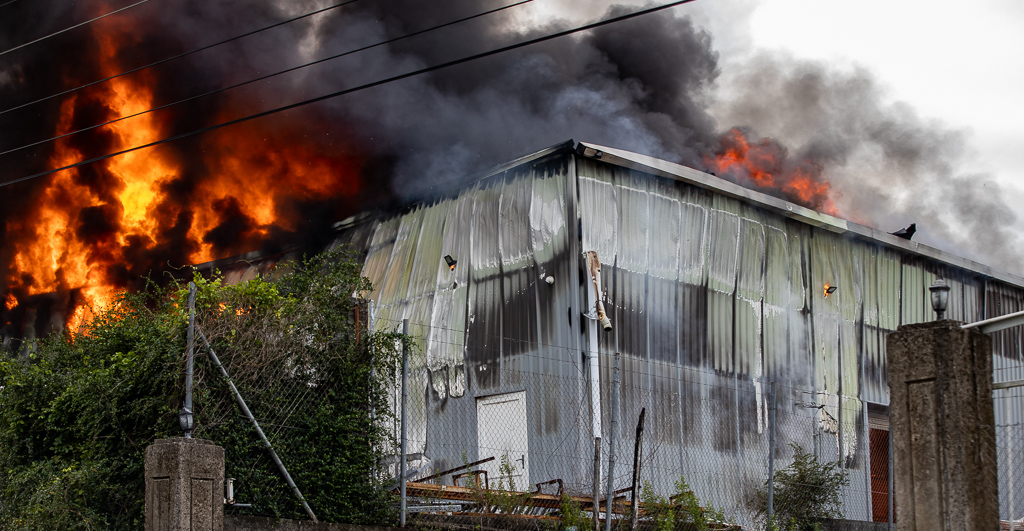 Digicel’s storage warehouse at Vaitele was ablaze on Sunday evening.

But thanks to the Fire and Emergency Services Authority (F.E.S.A.) sending out five trucks to fight the inferno, it was contained within an hour and no lives were lost.

Soon after 6:30pm on Sunday thick plumes of black smoke could be seen rising above the warehouse, and traffic increased significantly as people drove over to take a look, before the road was closed except for emergency services.

Security called F.E.S.A. which arrived 10 or so minutes later with five trucks in tow.

Within minutes of arriving the hoses were on full force. After 10 minutes of firefighting the flames were significantly lower, and by 7pm the black smoke had turned white, with the blaze largely gone.

Firefighters attacked the fire from all angles, including the carpark of the neighbouring wholesaler, whose staff looked on anxiously as the operation took place.

Around 7:20 the first hoses were being packed away with the fire largely out. Firefighters in full hazard protection equipment entered the building to assess damage and check the flames were out.

The warehouse, largely made of corrugated iron, collapsed from above and from the front. Flakes of an unknown material flew above the building.

The Red Cross arrived with an ambulance but there were been no injuries or casualties, and Police streamed in in large numbers to assist with operations.

F.E.S.A. Assistant Commissioner Tanuvasa Petone Mauga was on the scene also, and the Samoa Water Authority arrived with water tanks to supply the water.

D.M.O. and Red Cross staff handed out a constant stream of water bottles to the firefighters and other emergency services at the scene.

It is not yet known what caused the fire, and F.E.S.A. has been approached with questions. 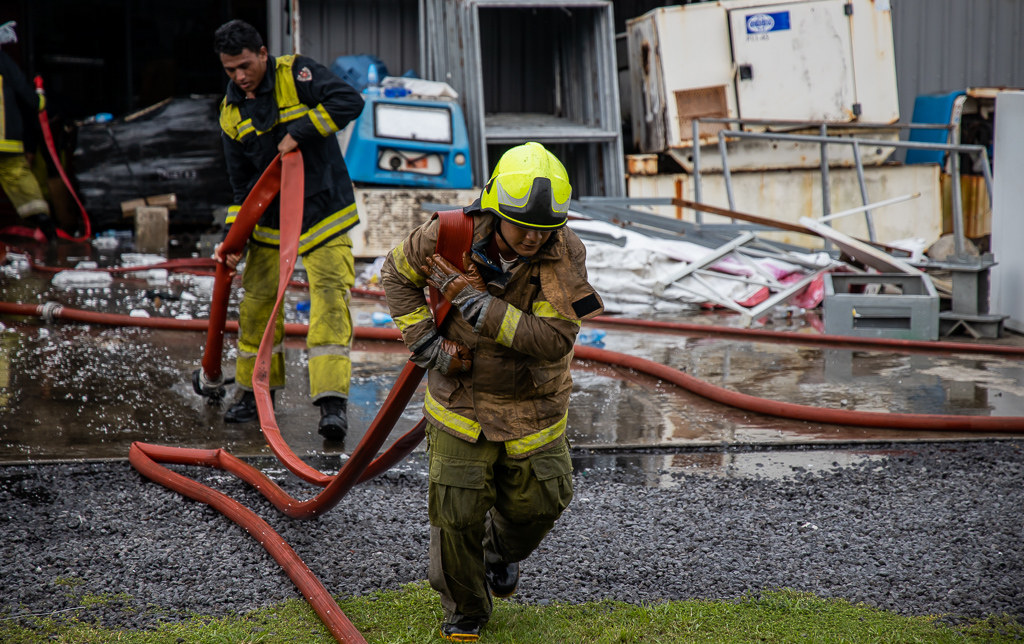 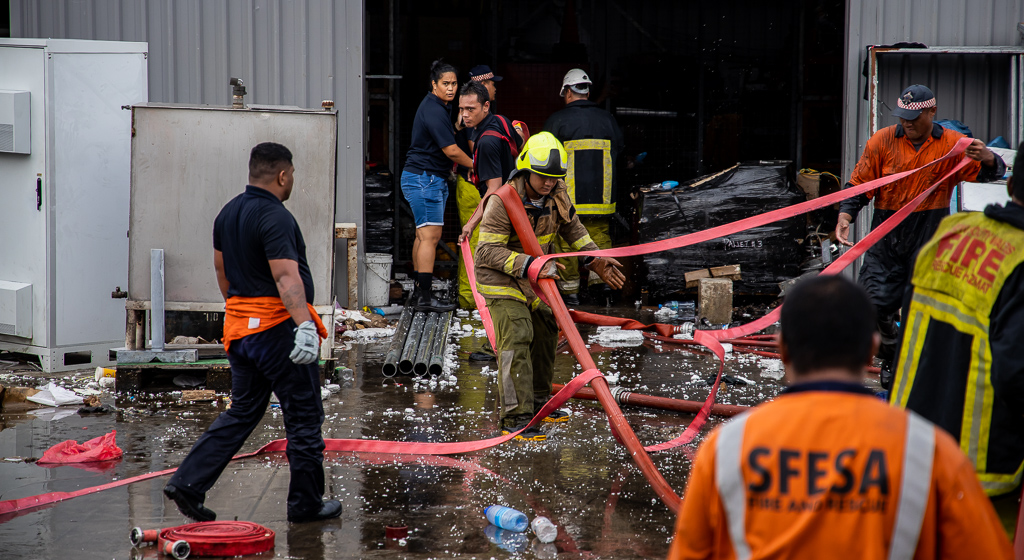 Digicel Chairman Pepe Christian Fruean arrived not long after the blaze began and was visibly shocked.

He told the Samoa Observer the warehouse contained paperwork and files, marketing and promotional materials, and some electronic equipment in storage, including outdoor generators on standby for use at sites across the country, several of which were badly scorched.

The half of the warehouse that copped most of the damage appears to be the side with the most paper, he said.

Pepe said he will wait for F.E.S.A. to complete their investigation before making decisions on how to proceed. He has not talked to the owners of the building yet.

“We need to understand what was the root-cause, so it’s a bit premature. Obviously we have lost our equipment, they have lost a building, so we are all in the same boat.”

Pepe said the immediate response from F.E.S.A. limited damage to not only Digicel’s property but the surrounding area too.

“Their speedy response mitigated more damage,” he said. “It’s important to acknowledge the good work they do, the people who put it on the line for us.”

The warehouse is leased to Digicel by Yoshida Commercial Limited, which owns the compound. General Manager Nash Yoshida was called to the scene from Lelata, and was struggling to take in what he was seeing.

He said a former employee called and informed him of the fire, but did not know whether it was the leased warehouse or his own factory where he produces the ubiquitous Samoan jandals.

Asked how he is feeling, Mr. Yoshida admitted he is sad.

“I’ve just lost a building. I’m just sad. I don’t know where to start, probably tomorrow I will start to sort things out.”

Yoshida Commercial had bought the warehouses from another owner only a year ago. Mr. Yoshida said the site is not insured. Digicel’s insurer also arrived to the scene not long after emergency services. 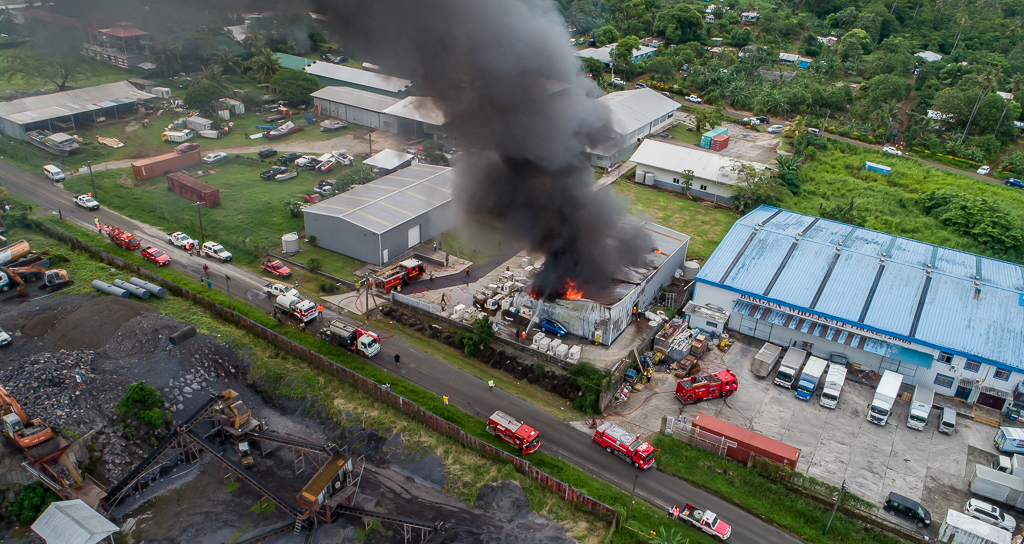 Half of the warehouse has collapsed in on itself, while the other half remains stable. Much of the storage inside was moved out as firefighters moved through the building.

Meanwhile, the road leading up to the warehouse was backed up significantly for some time on either end. Bystanders got out of their cars and homes to film the fire, and several young children ran up and down the banks on the road shoulders to get a better look.

Pepe is taking a pragmatic approach to the calamity.

“When a crisis happens, I don’t think you have a choice, you just have to try your best to deal with them under the circumstances.

“Clearly the timing is a bit unfortunate but we have just come through some tough times as a country on Friday so this is no different.

“We just need to keep positive and try and get back to business as usual as soon as possible.”

He was referring to the severe flooding that hit much of Apia and riverside villages on Friday, causing millions of tala worth of damage and cutting of power and water supplies to thousands of people.

“You think of what happened on Friday, there are a lot of business who have done it hard so we stand by them in solidarity because we need businesses to keep people employed and keep things ticking along.” 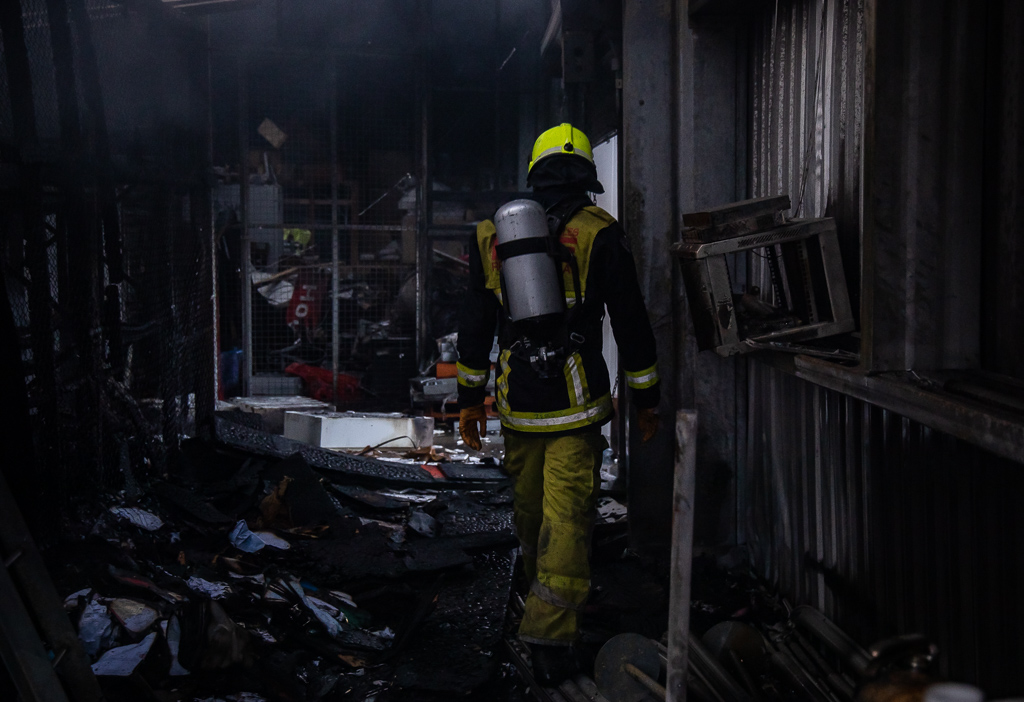 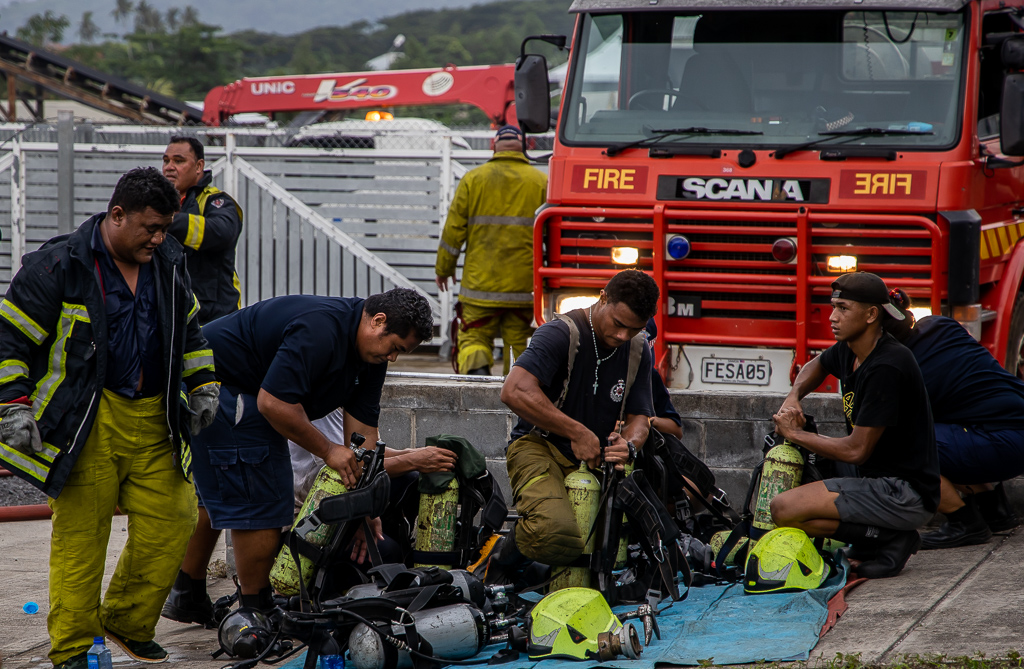 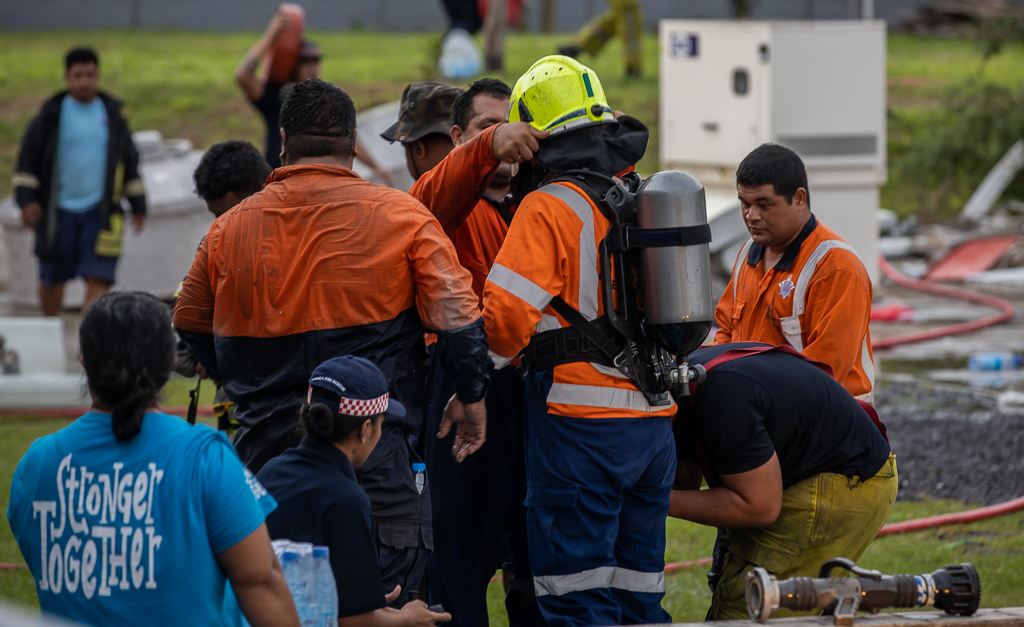