President of the Samoa Hotel Association Tupa’i Saleimoa Vaai has retracted statements about a lack of Government assistance for the tourism industry, accusing the Samoa Observer of sensationalism.

The Sunday edition of the Samoa Observer quoted critical comments made by Tupa’i in a front-page story (“Tourism collapsing, Govt. inactive: Hotel Association.”)

“We are still fighting for some sort of assistance from the Government but there is no indication they will assist,” Tupa’i was quoted as saying.

But on Tuesday, Tupa’i attempted to walk back his comments and denied he had spoken critically of the Government.

He told the Samoa Global News outlet that he “was hoping to end this most difficult year on a high note.

But he blamed this newspaper for printing a “sensationalised headline [that] has brought unneeded negativity at this time”.

Tupa’i said: “We are very appreciative of the Government’s help.”

He further told the outlet he had been contacted about a story specific to issues faced by one hotel (Sheraton Samoa Aggie Grey's Hotel and Bungalows) in the wake of last week’s flooding.

But it can be revealed that after his interview with the Samoa Observer on Saturday Tupa’i called back asking that criticism he had leveled at the Government be removed from the article.

Tupa’i was particularly concerned that comments he had made about there being no “appetite [...] from the Government to assist” the tourism sector not be printed in the article.

In another comment not printed in the original article, when asked about the need for an assistance package for the tourism sector, Tupa’i said: “I guess it’s not on the Government’s priority list.”

Those comments and a transcript of comments made by Tupai during his first telephone interview with the Samoa Observer are included at the bottom of this article.

Tupa’i walking back his comments came after the head of the Finance Ministry, Leasiosiofa'asisina Oscar Malielegaoi, criticised the hotel lobby President’s comments.

"I'm shocked that they're saying [the Government] has not been helping," Leasiosio said.

Those comments were printed in another story in the Tuesday edition of the Samoa Observer (“Finance chief disputes tourism neglect claims”.) 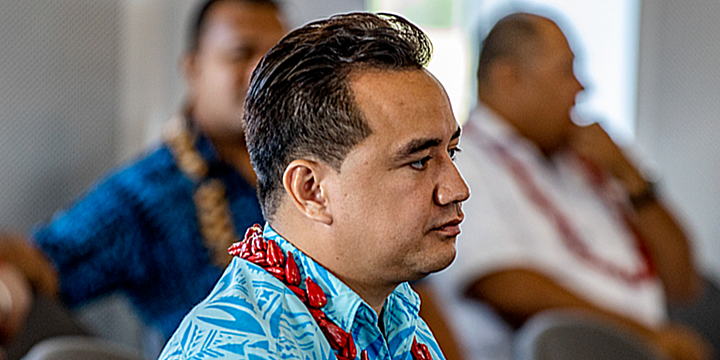 It also followed a meeting of the Samoa Tourism Board, of which Tupa’i is a member.

Leasiosio said the Government had clearly made moves to support the industry and the broader private sector.

Leasiosio’s began by noting recently-approved extensions to opening hours for businesses to allow families to spend more money shopping for Christmas and eating in restaurants.

"I'm shocked that they're saying [the Government] has not been helping, when all our quarantine operations, now, we have spent more than $10 million on quarantine," he said.

"In fact, it's close now to $12 million to $14 million, which is a very high cost being spent on accommodating more than 3000 repatriated Samoans, since the start of our repatriation.

A verbatim excerpt of the original interview conducted with the Samoa Hotels Association President, Tupa’i Saleimoa Vaai, on Saturday 19 December, over the telephone is printed below. (A second, follow-up phone call was made by Tupai later that afternoon.)

At the moment we are still fighting for some kind of assistance but there is no indication they will assist.

We have one more pitch (we are working [on]) lea matou galulue atu ai but at this point and time there is no indicator from Government, whether that is triggered from the lack of resources or whatever, but there seems to be no appetite at moment from the Government to assist.

This week's flood is no help at all.

I guess from an industry point of view, the industry is on the verge of collapsing.

We are still pushing towards trying to get Government to look at how they can assist the industry but I guess it’s not on the Government’s priority list.

But from an economic point of view I guess the economy is suffering at the moment because it’s missing that tourism income and from our perspective it is not the Government at fault but there is a need for some sort of consideration to ensure that it does survive, to ensure that the industry does help the country recover.

Our country needs tourism to recover.

We are, I guess from an industry point of view, not only just Sheraton but we have been urging.

I guess most of us have done what we can with the domestic market, and limited resources that we have in terms of trying to survive and maintaining our employment, but I think this is the last straw for some of the properties in town, especially property like Sheraton.

Again the industry is still knocking on Government and we still [have] got one more sort of push that we’re trying to do to convince the government but at the moment we just need a sympathetic ear.