A Lelata resident is transported through flood waters by boat. (Photo: Talaia Mika)

Old and young residents of Lelata and Magiagi were evacuated by Fire and Emergency Services Authority (F.E.S.A) workers as the villages' flood-prone river burst its banks again on Friday.

The whole of Lelata was covered with flood, mud and debris during the flash flooding that affected much of the nation on Friday.

Lelata residents were evacuated with a small traffic boat owned by the F.E.S.A as they could not pass through to the other side of the river.

Magiagi residents, by contrast, walked up the hills to the higher ground in their village. 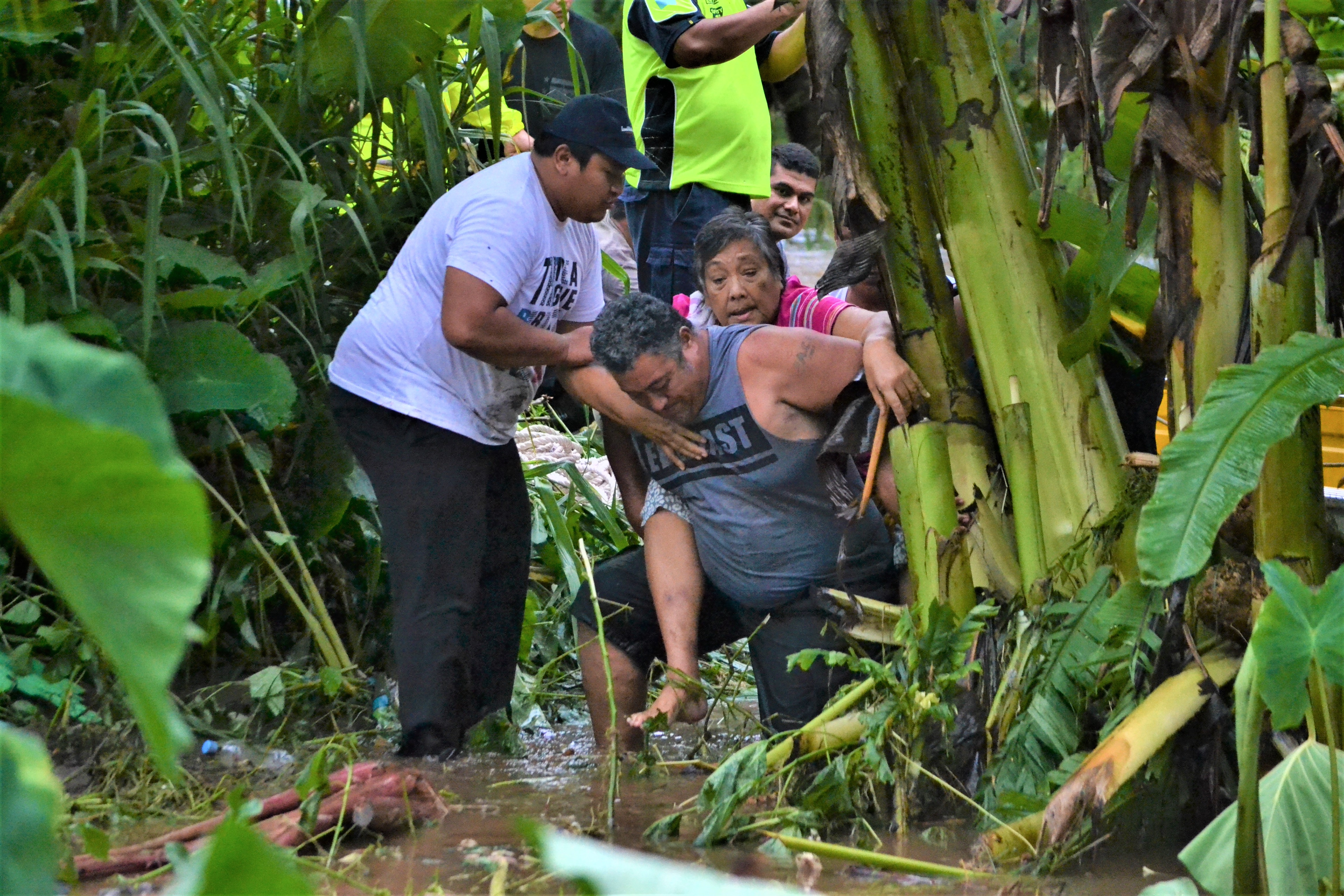 The river’s overflow inundated residents’ homes in both villages, following a course first carved out of the ground during 2012’s Cyclone Evan.

In the ensuing years, many families had been forced to repair and rebuild their homes.

But now many are damaged and covered and mud. 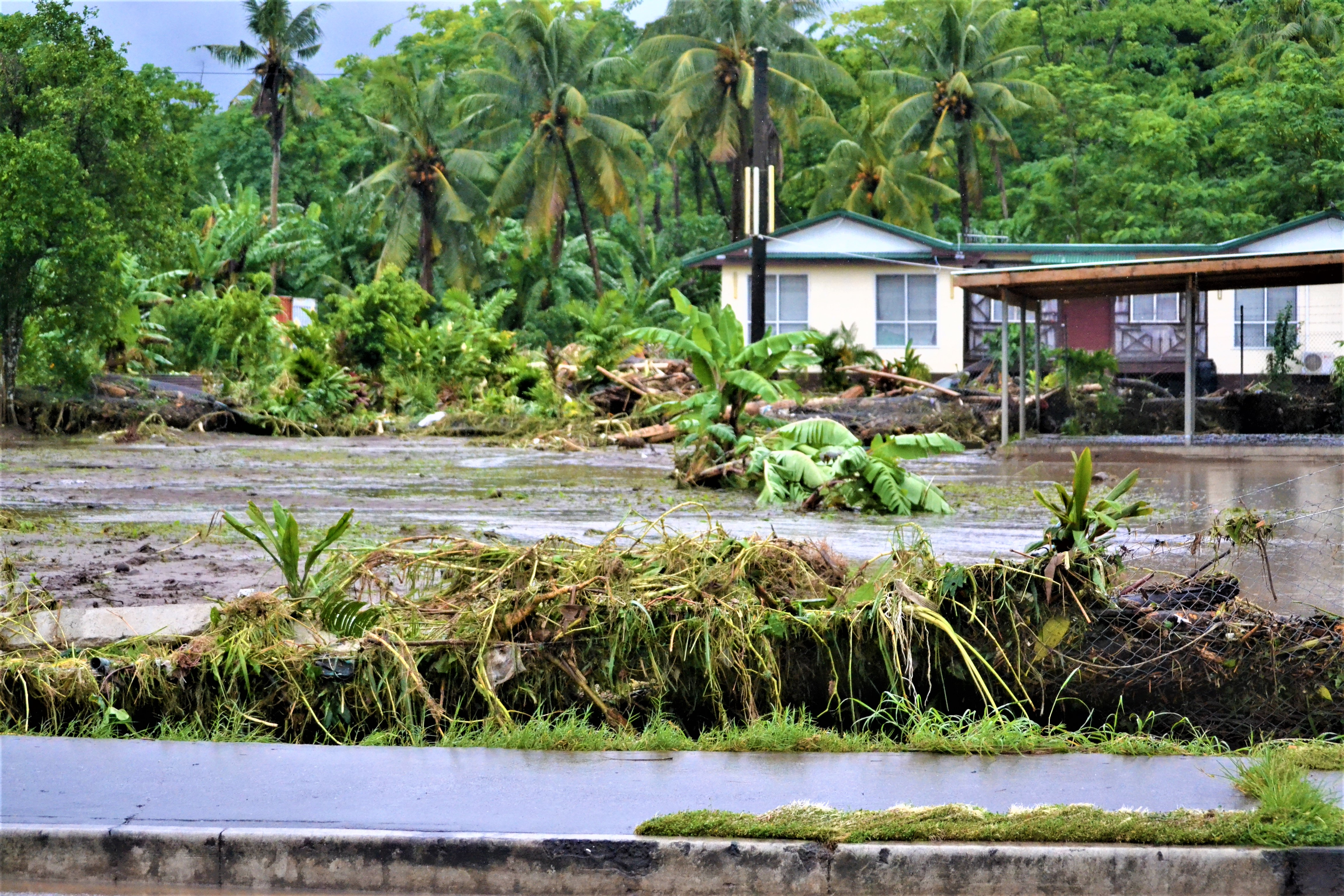 Some younger people wanted to remain in their houses on Friday to look after their homes and to prevent them from being damaged again.

The Chief Executive Officer (C.E.O) of the Samoa Shipping Services (S.S.S) who resides in Magiagi has offered his home to residents residing close as a temporary shelter.

Many Lelata residents say they are still waiting for the construction of a seawall from the Government.

But Lelata resident Gordon Bartley, whose land sits on the edge of the river bank said the Government has instead announced plans to raise the bridge adjacent to the river. He believes the replacement plan will not mitigate flooding. 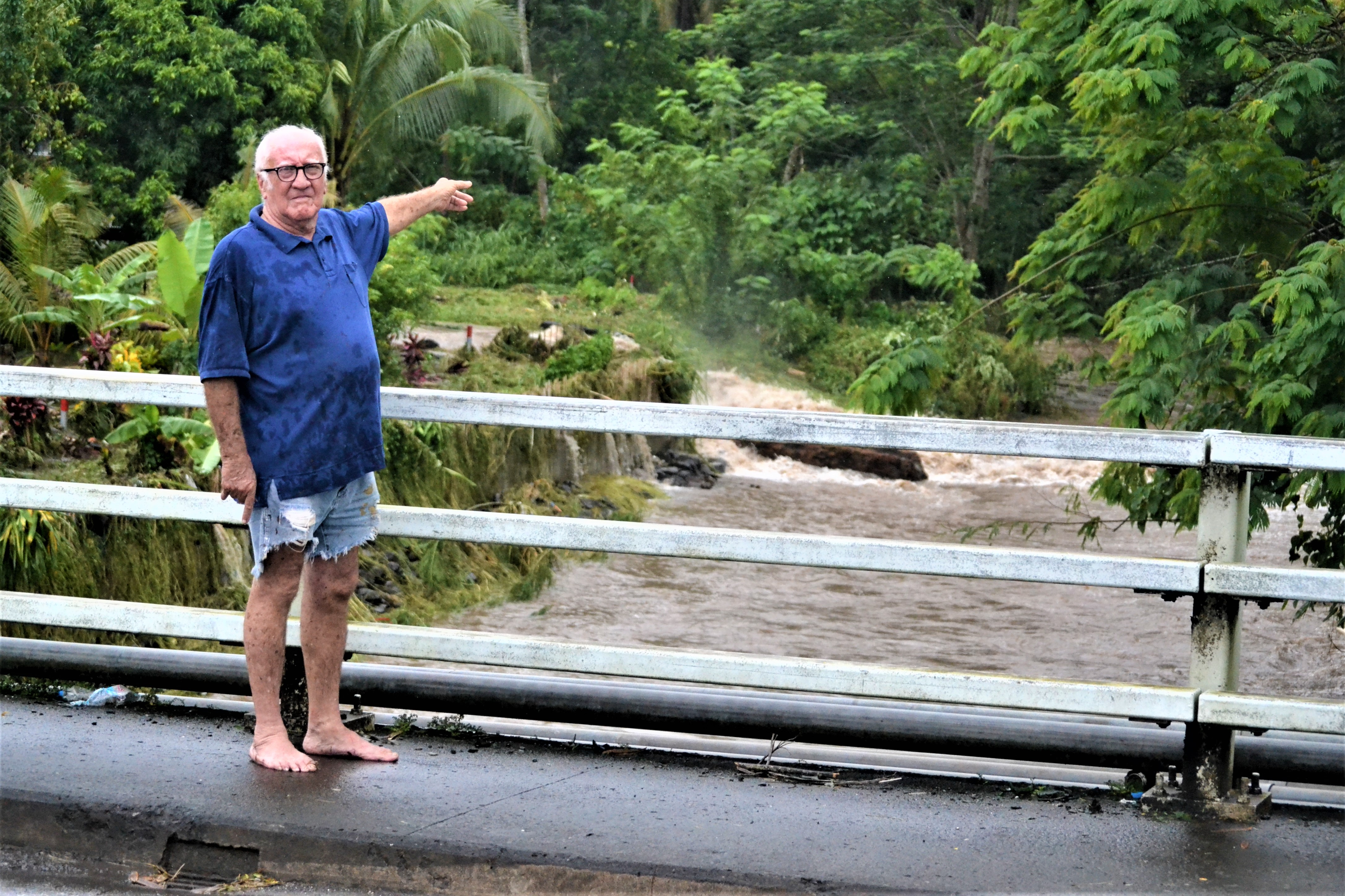 “All the homes have been covered with mud because if the seawall was built behind the Laka (Lelata), we would’ve been saved.

“That seawall was mentioned months and months ago but nothing’s been done.”

This concern almost led to the 74-year-old stopping the Prime Minister’s vehicle on Friday morning to share his concerns.

“I saw him here in the morning and if I had known earlier I would’ve stopped him to tell him about this issue,” he told the Samoa Observer.

The Government’s recent announcement of its plan to raise the bridge to prevent flooding from the river hasn’t gone down well with the residents, Mr. Bartley said. 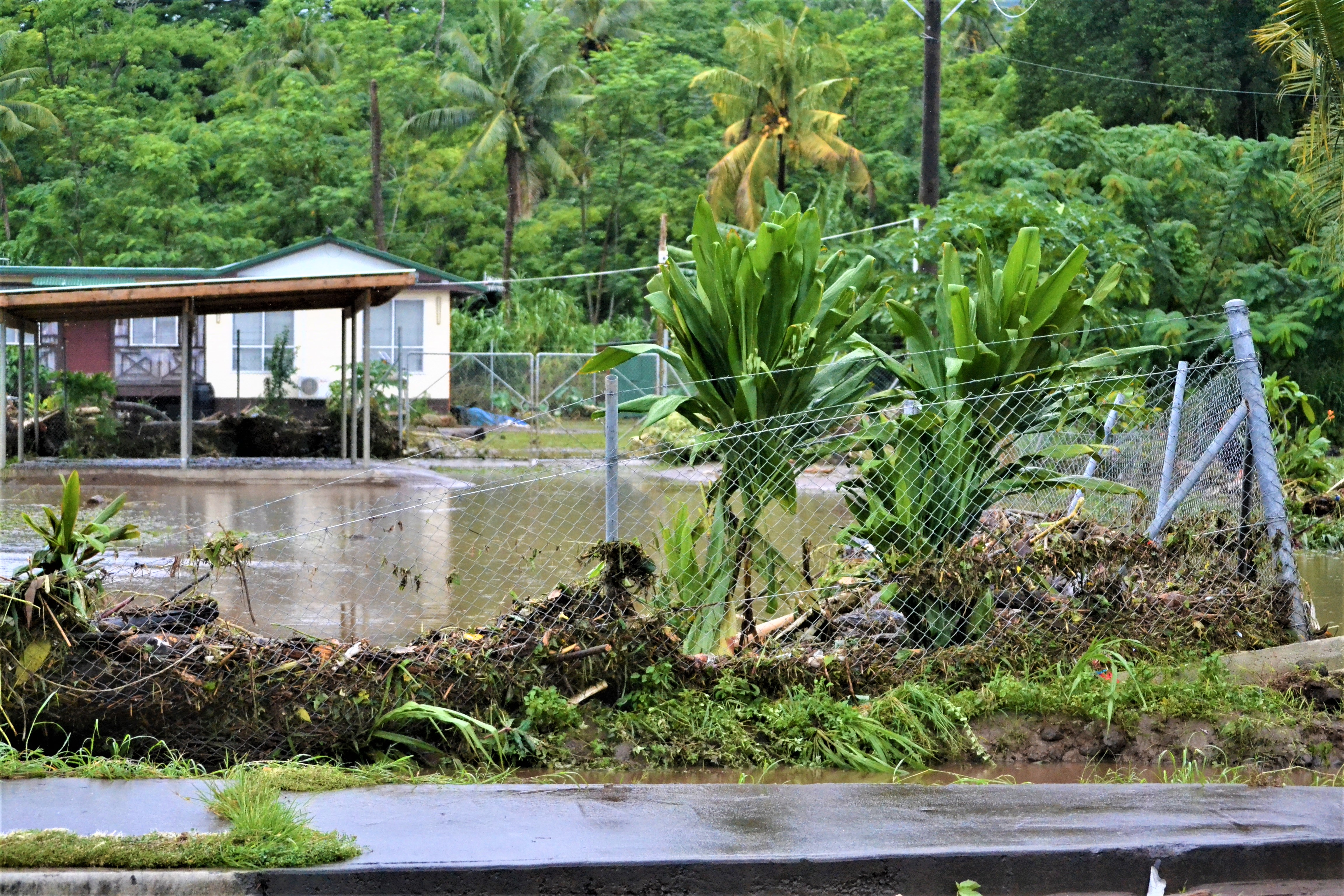 “It’s been years, and we’re still waiting for when they’ll be doing it and now they’re doing the bridge? What for? If they’re trying to raise the bridge because they think it might be overflown by the river, I’m telling you now, ever since that bridge was there, the water has never gone over.”

If the Government is intent on raising the bridge, then Mr. Bartley said he hopes they will not raise the road too, as it could lead to the creation of a dam and more problems for the residents.

“As far as I’m concerned I can’t stop them from raising the bridge – but as long as they don’t shift the road – because once they raise it, when the water overflows, it will just come back when it hits that raised area, creating another big dam," he said.

"Raising the bridge is just not going to minimise any effects of flooding unless they build this seawall." 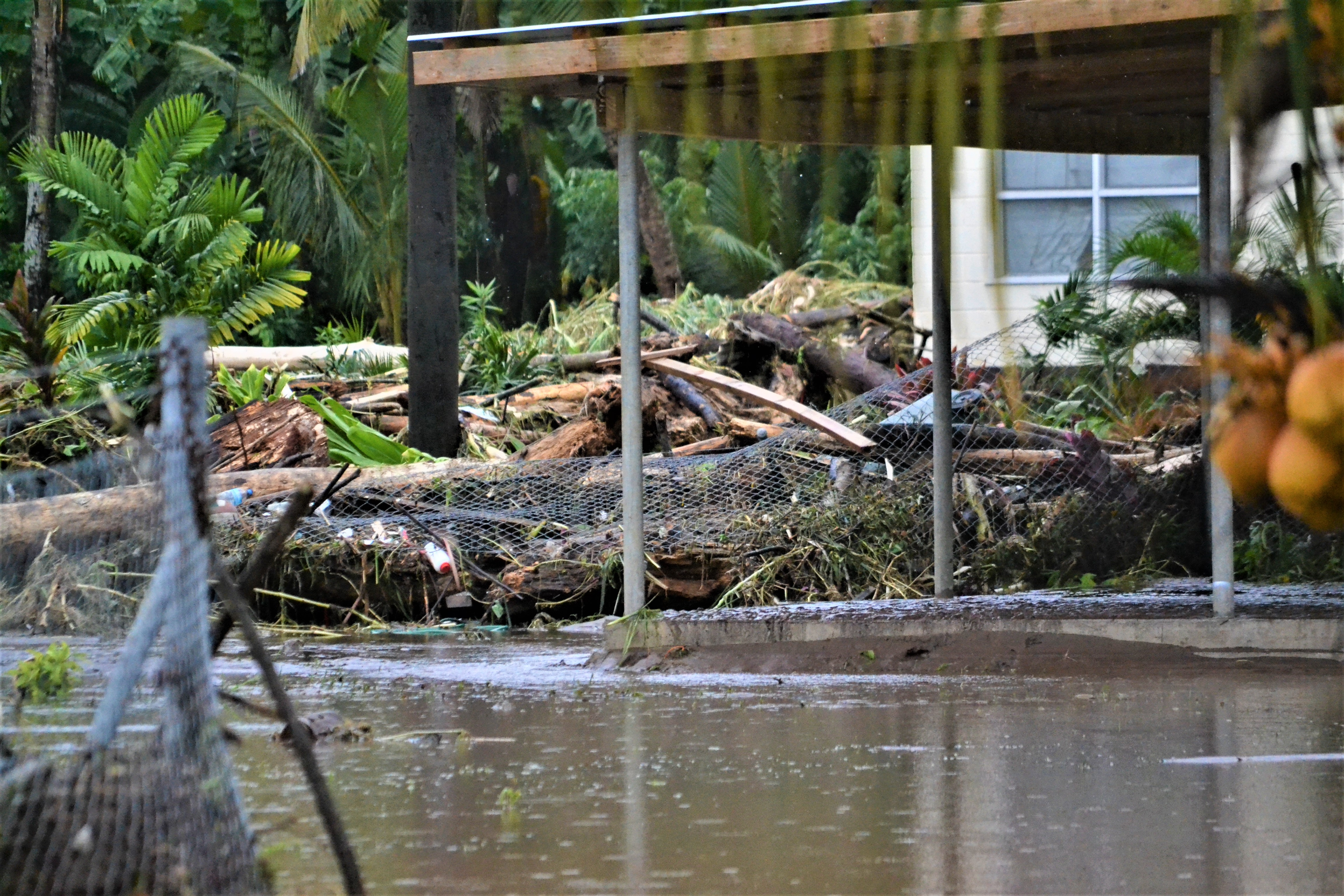