Savai'i islander Norman Tofilau, currently Head Student at Fraser High School in Hamilton, New Zealand has his sights set on Broadway and is working hard to get his big break.

To help him get there, he’s studying a Bachelor of Music and Performing Arts at Wintec (Waikato Institute of Technology) next year, according to an article which was posted on the institute's website.

If you had met Norman in 2017, you might not have believed him if he told you he would be Head Student in a few years, and that he wanted to be a performer.

Going to New Zealand as a teenager from Savai'i, Sāmoa, and going straight into high school, Norman knew nobody except his uncle, and spoke very little English. He struggled to adjust during that initial time in New Zealand.

“I came here by myself, then went to live with an uncle in Hamilton. It was really hard leaving my family back in the islands. The transition was hard. I didn’t know anyone, and I found it difficult to fit into a new environment.”

Although softly spoken, Norman is not shy and not afraid to make a mistake. Determined to learn English and participate in his high school activities, Norman put himself out there and got involved in drama and the school production.

“I had to learn lines and rehearse – that really helped my English.”

He enjoyed drama so much that he found his lifelong passion and went from speaking zero English to being the lead character in the school production for two years in a row.

After realising that he wanted to pursue a career on stage, Norman applied for several different drama schools throughout the country and was accepted into all of them.

Junior Siilata, Pasifika Dean at Fraser High School, says that Norman chose Wintec because he could “see the pathway, see success. There are Fraser students who have come before him and have gone on to do awesome things. There’s a community to go into and community is very important to Norman.”

Norman’s long-term goal is not only to be a performer, but to provide a platform for other Pacific Island students to get into music and performing arts. He wants to provide that space to make it easier for other Pasifika youth to see that it can be a viable career.

“I would love to do that, even to open up my own performing arts academy one day. I know that at Wintec I’ll be able to take marketing and business papers alongside my degree to help with that.”

Norman is a shining star on stage, but his humility is what shines in person. Rather than talk about his own achievements, he insists on saying that “he’s so lucky and grateful that he has amazing teachers and new friends that have helped him achieve throughout his schooling journey.” 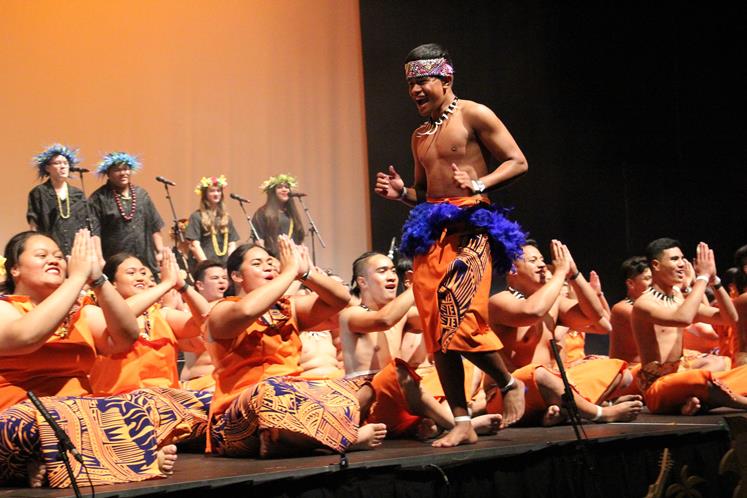 This year hasn’t been all about the limelight either, as Norman struggled to keep his spirits high during the lockdown.

“It was a difficult year. I didn’t have a device and that was a major problem as I couldn’t do any work at home.

“At one point I said to myself ‘This is it.’ I was gonna give up. One day my teachers called me, and we had a good conversation. They encouraged me to keep going and to finish this year strong. I’m so grateful for them.”

Despite struggling to keep motivated himself, Norman took it upon himself as Head Student to encourage his fellow classmates to keep going throughout that time as well.

“There were so many barriers for me and many of my classmates. Along with other students in Aiga Tasi, our Pacific Council group at Fraser, we connected through Zoom together every week, to keep our Pacific students connected and motivated.”

Each day through lockdown Norman made motivational videos on his phone. He would read inspiring quotes and send messages of hope and positivity to keep everyone going.

According to Siilata, “the videos had a lot of positive feedback. Norman tried to lift everyone else’s morale. He put his own feelings aside to build and strengthen his community.

“He has a big heart and goes out of his way to help those are struggling and he forms close relationships with them. They listen to him because they know it’s genuine.”

Now that his school year has coming to an end, Norman has been reflecting on his exams and planning for his summer break. His final exam was for Scholarship Sāmoan where he hopes to do well. Over the summer he will be working at his part time job at Wendy’s to save money and to contribute to his family.

It’s this spirit of generosity and service that makes Norman the standout leader that he is.

“If there’s one word that defines Norman in my eyes, is a Sāmoan word – tautua. It means to serve from the back,” says Siilata.

“Norman is in a position of leadership because he has shown he is a leader through his service and actions. Don’t get me wrong, he has a strong voice, but he gets the respect ‘cos he shows respect.”

Even with his eyes set on Broadway, Norman’s focus is still on strengthening young Pacific voices and he always has his community in mind.