A replica of the star that guided three wise in Bethlehem shines brightly above the entrance to the Vaimoso mansion that Leapai Richard Brown and Anna Brown call home.

In the front-yard larger-than-life candy canes and lollipops glow, while a vintage Sheffield bicycle is decked out in Christmas lights and placed atop a mango tree.

A mannequin dressed up as Santa Claus sits on a bicycle, seemingly poised to begin his task of delivering gifts.

The star and cycling Santa are the two major additions that Leapai, a former National Football League player and a candidate for next year’s election, made to the family’s 'Christmas Candyland' display this year.

The family tradition was started eight years ago when their spirits were down after Cyclone Evan in 2012.

Their 13-year-old son, Kilo, was then just five.

“You know my responsibility here was the star because this is a new thing – the star. I wanted to do the star,” Leapai told the Samoa Observer.

“I did Santa Claus on the top of the bike. I was responsible for those two things and other than that there are a lot of lights,”

The lights are a lot of work, he said. And border closures made things even more difficult.

Salvaging light from previous years is tough. Each bulb must be checked and strands must be untangled.

“It was very difficult and was time-consuming,” said Lepai.

“Some of the strands were off and we had to go through it. You know how it is, that is why a lot of people don’t like to do it. This year it was hard. It was a family effort, we got our nephews involved; they came by and helped out, the youth from our ward the young men came and helped sort out the light bulbs.”

Last year the theme was Santa Claus. The Christmas 2020 theme is Candyland.

Over the years, the family has learned valuable lessons about managing a Christmas lights display.

Early on, the display was brought out in early November but they found that left lights exposed to the elements for too long.

The lights and décor require a lot of storage space and when the holidays are over, they are placed meticulously into Tupperware containers. 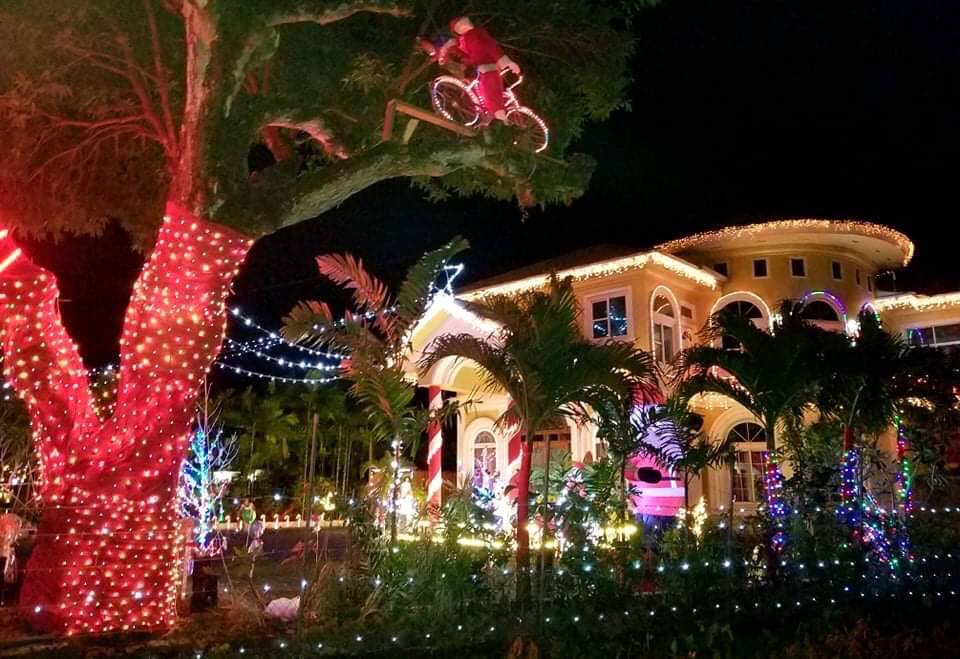 Each light strand and decoration is meticulously labelled.

“One year we did it in the beginning of November but when we got to Christmas the light bulbs were ruined…timing is also important and we have got to be smart so we went back to the American tradition of putting them up after Thanksgiving Day,” Leapai said.

“There is lots of management. If it rains then some won’t be working very well the next day and we have to check them.

“There is a lot of labour involved, and time. We put them all in Tupperware and we store them and it takes up a lot of storage. Each is labeled and we have to be smart with that as well.

“Eight years they are out in the sun and that takes a toll on the lights so we have to make sure we store them properly. We are trying to save money.”

But the reactions from the children make it worthwhile, he said.

“It’s always nice to see the reactions of the kids when they come by. There are a lot of passersby and most of the folks are afraid to come in because of the whole privacy thing but we welcome everyone to come,” Leapai said.

“Our yard is open for people to come in and take pictures and that’s what we did this for it isn’t just for us, it’s for the community, it’s for everyone. What’s the use of putting up lights and no one to enjoy it?”

Next year, Candyland fans can expect a Gingerbread House wonderland.

All the twinkling lights, Christmas music, and festive cheer all really come down to the teachings of The Church of Jesus Christ of Latter-day Saints, who host an annual worldwide “Light The World” campaign, said Leapai.

He holds a calling in Vaimoso Ward.

“This whole thing is about that spirit of Christmas and it is in line with the teachings of the church,” said Leapai.

“The theme is Candyland and next year it will be Gingerbread House. Last year we had Santa Claus in his sleigh but this year we wanted to welcome people with the star.”

“All the colorful lights represent the hardships of the year and if we look at it from the negative side it will be just a dead bulb but we can take those hardships and learn from that journey and make them into sparkling Christmas lights.

“That kind of opened my eyes to what we are doing here, uplifting spirits and expressing gratitude for what we have. We have this so we may as well let everyone appreciate our efforts and what our Father in Heaven has blessed us with. We are very fortunate.”

Next week, there will be Christmas caroling on Monday, Wednesday and Friday from Vaimoso Ward singers.

The Samoa Tourism Authority (S.T.A.) has added the Vaimoso Candyland to their online program for the Government’s inaugural Festival of Lights launched last Friday.

“My favourite thing here of course I did my star – it’s my star and my bike. That’s my father’s bike and…that is why I cherish that bike,”  said Leapai.

“The bike is pretty old as you can tell that is an antique. It’s an American bike…it was hard putting it up there. And that mango tree, it was planted by my grandmother.

“We got the star, my nephew climbed up there. We got the lights coming out, that’s the energy from the star but the problem we ran into is we didn’t have enough white lights so the mango tree we had to do it differently. If we would have had the lights, I would have wrapped it with white to match the star.”

The Christmas Candyland in Vaimoso opened in late November and has drawn up to 12,000 viewers on Facebook.

“It’s not about who is rich and who has stuff. It’s about having a heart filled with gratitude and appreciation – and sharing. That is what the whole purpose of Christmas is,” said Leapai.