Samoan sailors stranded in the United States have been informed that the remaining repatriation flights for 2020 have been canceled.

The development was revealed in a letter dated 30 November 2020 from the Mediterranean Shipping Company (M.S.C.). The letter addressed to “All Samoan Crew” is signed by Marco Maresca, Fleet Personnel Director for M.S.C.

“We are very disappointed to give you again bad news,” the letter reads. “As you already may know, your government decided to cancel also the possibility to return home by cargo flight of December 4 and 7, stating that it will not [be] possible to return before January.

“We are going to chase them to obtain any outcome, even if they totally freeze any possibility of return for the current year. We will await this date on January to plan your safe repatriation and will try to figure out any suitable solution meanwhile they take this decision.”

Mr. Maresca noted that the cancellation was a decision by the Samoan Government.

“It is worthy for us to guarantee that the company makes all effort to send you home and that this cancellation is out of our choice and only up to your government,” the letter continues. “Meanwhile, your government decided to re-open, we will try to handle in the [best] way possible your situation on board each single ship.”

Attempts to get a comment from the Samoa Shipping Services General Manager, Lautimuia Afoa Vaai, were unsuccessful.

But the Chief Executive Officer (C.E.O.) of the Ministry of Foreign Affairs and Trade (M.F.A.T.), Peseta Noumea Simi, told the Samoa Observer she was unaware of the flight cancellations.

“I am unaware of any flight cancellations you are referring to. All preparations are on target for the 4th December flight,” Noumea said via e-mail on Wednesday.

M.F.A.T. is involved in communications between M.S.C. management and the Samoan Government. On the Government of Samoa's website, all public inquiries regarding repatriation flights are referred to M.F.A.T.

The Government has issued no official statement announcing that the repatriation flights have been canceled. 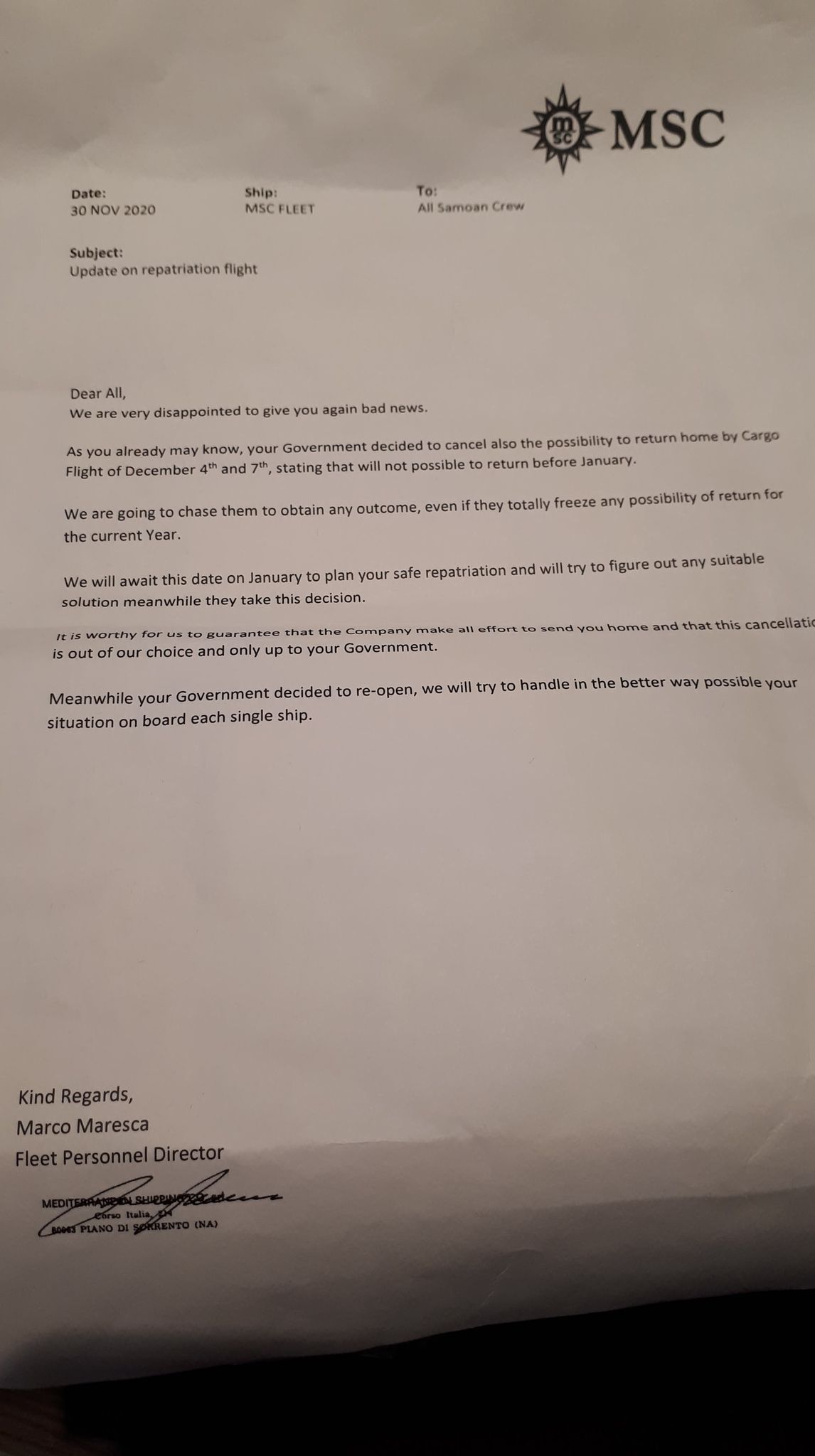 In a follow-up e-mail, Noumea was provided with a copy of the letter from M.S.C, and asked if she could comment on it.

“No – [I] am not the authority to do that and to respond to company communications – soon you will receive a release on the seafarers,” Noumea responded.

Questions were also sent to the Press Secretariat, Nanai Laveitiga Tuiletufuga with a copy of the M.S.C. letter.

The inquiry was referred by the Secretariat to C.E.O. of the Ministry of Prime Minister and Cabinet (M.P.M.C.), Agafili Shem Leo, on Wednesday. There was no official response as of press time.