Influenza-like-illness spikes are being put down to improved recording, not increased infections. (Photo: Vaitogi A. Matafeo)
Health

Samoa’s rising cases of influenza-like illness (I.L.I.) have dropped back on par with the five-year average, new data from the Ministry of Health shows.

At the end of August Samoa recorded more than 2000 cases of influenza-like illness which caused it to be added to a regional disease surveillance alert.

But as of the Monday 23 November surveillance alert, the increase in Samoa’s I.L.I. cases since then (12 weeks ago) is due to an increase in reporting and enhanced surveillance, rather than an actual increase in cases.

This is according epidemic and emerging disease alerts in the Pacific issued by the Pacific Community (S.P.C.) and information provided by country officials earlier this month.

So far the surveillance is for monitoring purposes and the number of cases has not exceeded a warning threshold yet, which is if it doubles the weekly average of the previous fortnight.

The World Health Organisation country representative Dr. Rasul Baghirov said because of this, cases have not been tested further to learn more about the illness.

“The rise in I.L.I. cases reported over the last twelve weeks is due to an increase in sentinel sites reporting syndromic surveillance, refresher training and enhanced surveillance conducted in all sites,” the S.P.C. reports.

“The alert has been removed from the map."

Back in September, Dr. Baghirov said the increase in cases is most likely due to “improved vigilance and better reporting,” in particular in the district hospitals.

As public messaging around COVID-19 highlights the similarities between its symptoms and that of the cold and flu, people taking extra caution around their illness can only be a good thing.

Meanwhile the Government maintains that if you do have COVID-19 symptoms please do not visit a clinic or hospital, but call the Health Emergency Operations Centre and staff will visit to determine your condition. 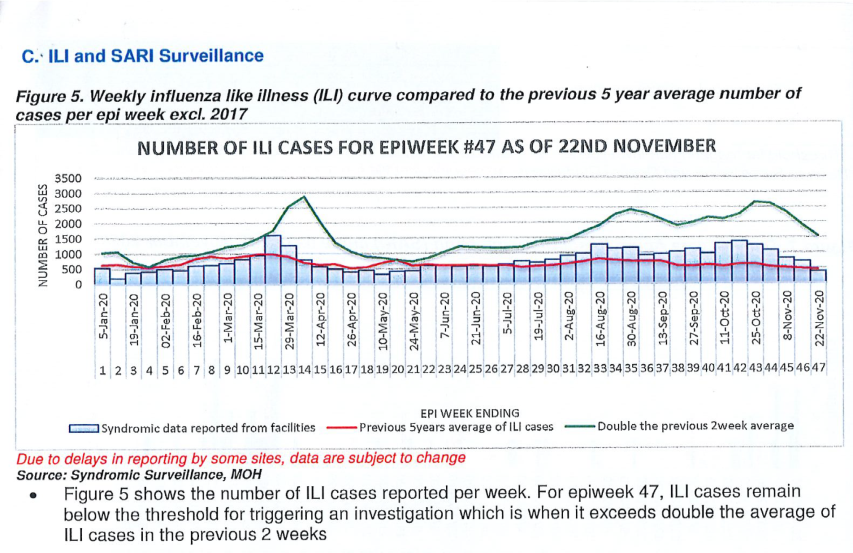