And so it was with Pacific Love Music Producer Lale Talo, who returned in 2017.

After his father died that year, Talo, 46, packed up his life in New Zealand, where he had lived for more than 20 years, and moved back to Samoa to take care of his mother.

When he returned to Lefagaoalii, Savai’i, Talo brought with him his life’s work: the international Pacific Love Band and a passion for making music.

“The band Pacific Love has been around for a long time. We started 10 years ago in New Zealand and then Australia in 2019 but in Samoa we are still new. What we do is we help others who want to record their music,” said Talo.

Pacific Love is an eight-member band composed of Talo’s two eldest sons, brother and relatives on his mother’s side of the family.

Sons, Esau Lale Talo, are lead singer and drummer and Isaako Lale Talo is a singer.

In addition to the band, there is also the Pacific Love studio, which is being kept extremely busy by artists in Savai’i.

The studio is working to release several new albums and the band is currently on Upolu. They traveled to Upolu to perform at a 21st birthday party on Saturday.

Among the new releases is a Christmas album from Pacific Love.

Music has always been a part of Lale’s life, since his school days. It was the late Methodist Church of Samoa President Reverend Lene Milo who instilled in him a love for music.

“I learned all about music from Methodist Church President of Samoa Rev. Lene Milo. I lived with him and when he died I went back to live with my mother. Rev. Lene Milo raised me, he took care of me and he helped me develop this musical talent of mine,” Lale said. 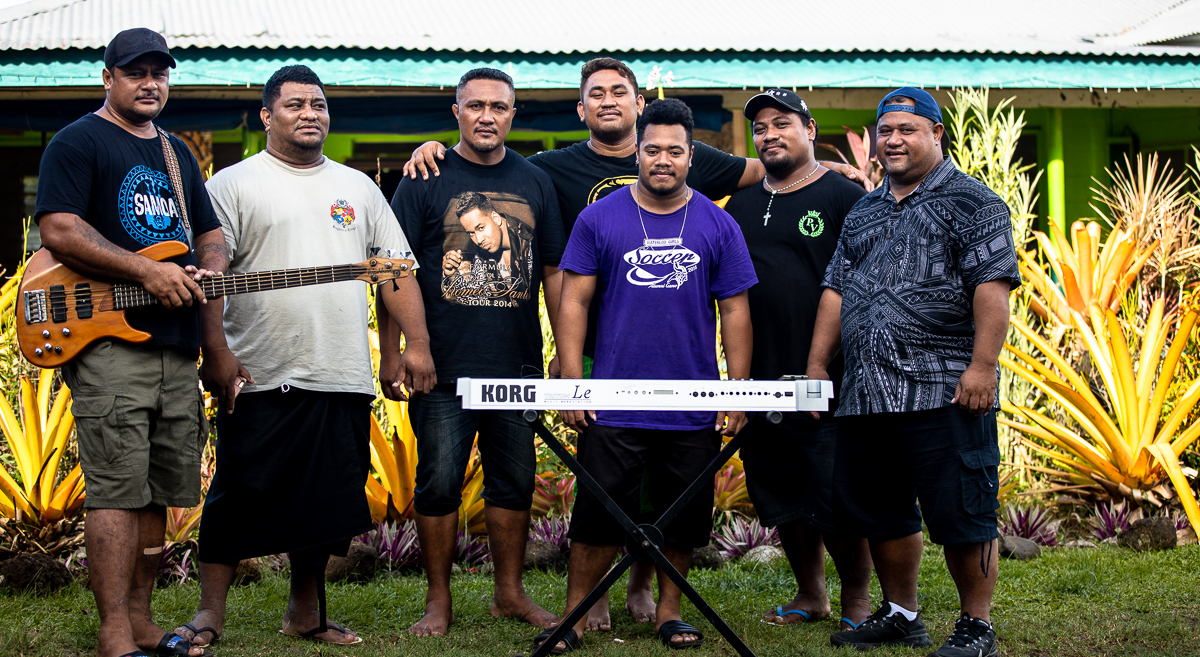 He has since become a member of The Church of Jesus Christ of Latter-day Saints and holds a calling as Second Counselor in the Lefagaoalii Branch.

“My talent, I love to share it with the young musicians,” he said.

“Even in New Zealand that is what I used to do – help them develop their music. My thinking is that the kids come from Samoa and they have no money.

“It is through music that I have met so many of these youth. When they’d come to [New Zealand] I helped them with their recordings and with setting up their concert.

“Now that I am here they [are helping] me build Pacific Love in Samoa. I lived in New Zealand for more than 20 years. My dad died in 2017 and then I moved back to Samoa because there was no one to look after my mother.”

His dream is to develop Samoa’s younger generation of musicians.

Despite the far location of his studio, way out on the north coast of Savai’i, people make trips to have him help with their music.

“I am proud to be from Savai’i. I thank the Lord that people come to my studio but we are so far away…no matter how far away our studio is, people come,” said Lale.

“I know it’s because I get the job done. I am not really competing with the other studios but people do come all the way to our side.

“I tell people there are studios closer to them but they still come to Lefagaoalii. I do have a dream and my dream is to develop the talents of the children of Samoa. That is why I get no rest because I want to push our children to use their talents.”

Young musicians, he said, lack the resources to have their music recorded and produced but they are brimming with so much talent.

“Our youth in Samoa, they don’t have a lot of money but the talent our children possess is outstanding. It is so good. There is no Samoan child who does not possess this talent,” said Lale.

“What is happening is that they have no money to do certain things to move forward with their music.

“When people come to me looking for help, I help them. Perhaps later on I will get some money out of it but to me it is more important to develop the talent it’s my work I do for the youth. We have a lot of plans for Savai’i in the new year.

“The band will tour Savai’i and Upolu and I will push our youth to develop their musical talents.”

Upgrades are in the works for Pacific Love Band and Studio. Much of it depends on a brand new state-of-the-art sound system that is due to arrive in early December.

They also have the Pacific Love Recording Studio YouTube Channel that shares their music with the world.

Lale performed some recordings for Le Evaeva Band before they disbanded. He has also worked with Tooala Eteru in Pacific Love.

The name Pacific Love was derived from Pacific Soul, the all-female Samoan group from New Zealand.

Before Pacific Love, the band was called Vaatofu (As in VaatofuoSamoa) which has its roots in Faleasiu. He changed it to Pacific Love when he was in New Zealand.

“I wanted a band name that spoke of love because I am good to people and the people of the Pacific,” Lale said.

“I am not a singer but I am a music producer so I do everything else. A guy will come with a song and the lyrics will be all wrong then I tweak the words. I don’t release any song unless it is truly ready. People get angry sometimes and bother me to release the music but my work needs to be done.

“And until my work is truly done, I don’t release that song because you have to make your music with the listeners in mind. Music is made for the people if you don’t have listeners then what is the point?”